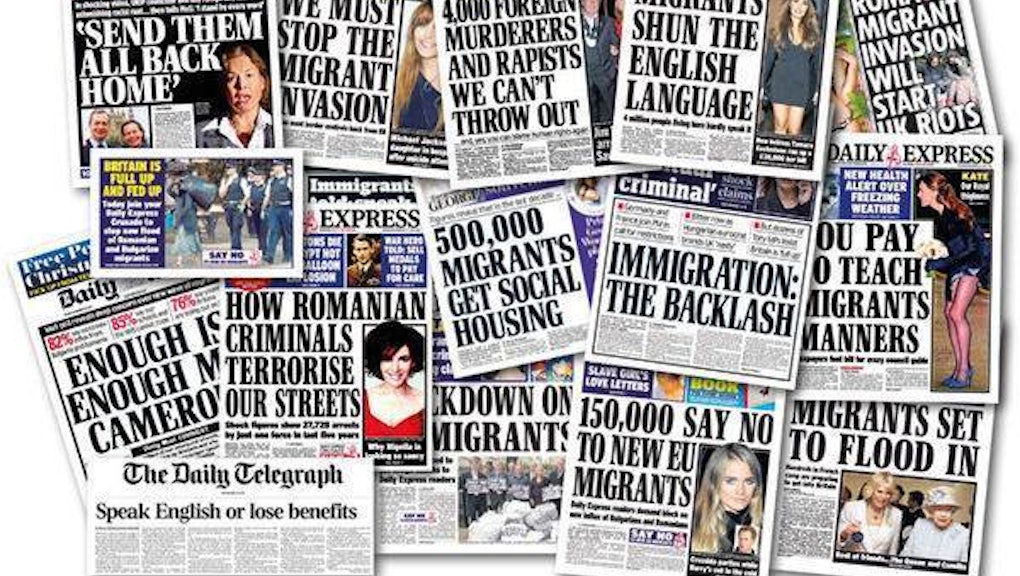 While the early hours of January 1 saw champagne corks and fireworks all over the world, the New Year meant judgment day for much of the U.K.'s right-wing media.

For months prior, the chorus of conservative voices had been promising that the start of 2014 would also be the end of life in Britain as we know it, as controls expired and Bulgarian and Romanian citizens were able to live and work freely in the U.K., just like citizens of the other 27 EU countries.

Headlines last year screamed, "HOW ROMANIAN CRIMINALS TERRORISE OUR STREETS," "MIGRANTS SHUN THE ENGLISH LANGUAGE," "SEND THEM ALL BACK HOME" and — most disturbingly of all — "ROMA MIGRANT INVASION WILL START UK RIOTS." The articles beneath these headlines were often based upon assumptions and racist stereotypes.

The U.K.'s borders, however, did not see the predicted flood of migrants. In fact, the borders looked a little more like this:

And according to Romania's ambassador to the UK, only 25 Romanians have entered the country since the restrictions were relaxed.

The oversimplified fear here, is that enormous numbers Romanians and Bulgarians will move to (and overwhelm) the rainy little island to take advantage of British benefits and comparatively high wages. That fear has been fanned by the media, and it has also helped motivate policy decisions, with UK leaders even pushing to cut child benefits for the EU migrants  — a move that has been rejected by Brussels. The antiquated logic of this argument is embarrassingly flawed on several levels.

There have been anxieties that 2014 will be a repeat of 2004, when after Poland and several other countries joined the EU, one million immigrants flocked to the U.K. — far outstripping government estimates. However, those predicting an "invasion" seem to misunderstand that Romanians and Bulgarians have been able to travel to the U.K. since 2007, when their countries joined the EU. Temporary restrictions meant that they had to apply for work permits before — now they won't have to. It seems unlikely that people with the determination or desperation to move their lives overseas would wait seven years for it to be a little bit easier.

Indeed, many Romanians interviewed by newspapers seemed bemused by the idea that anything has really changed since the start of the year. But this reality gets in the way of inciting fear of immigrants in the public, which is politically useful. Last week, Conservative MP Nadine Dorres added to her public humiliation by claiming, "We could have a tidal wave [of immigrants] at any moment — and that is the problem," on BBC Question Time.

There has also been confusion over what being Romanian actually, um, means. In November, MP Tom Harris wrote of the "filthy and vastly overcrowded living arrangements, organized aggressive begging and the ghetto-isation of local streets" that Romanian immigrants brought to Britain. Published on a respectable broadsheet's website, Harris was actually talking about behavior associated (rightly or wrongly) with the Roma population — a travelling community who make up only 3 percent of the country's population, according to the 2002 census. The Romanian Ambassador to the U.K. responded to this confusion and the "insulting media campaign against Romanians" in a searing piece for the Huffington Post.

Nursing blinding hangovers (I imagine), British journalists camped out in Bucharest airport on New Year's Day to try to interview members of the immigrant "invasion." They found only a handful, however, and then the penny began to drop that Romanians and Bulgarians aren't as enamoured with the idea of life in Britain as the aged, imperialist rhetoric would have us believe.

As we have seen again and again, anti-immigration rhetoric offers politicians and public figures a simple explanation for many of the issues with which British society is currently grappling: unemployment, low wages, housing shortages and enormous government deficit. The Romanians and the Bulgarians have offered an easy target in the last couple of months, even as the numbers haven't quite added up.

Whether the British public believes in open borders or not — which we may find out during the promised referendum on Britain's inclusion in the EU — this recent racist and ignorant media campaign is embarrassing to everyone. If I were Romanian or Bulgarian, I'd stay away too.