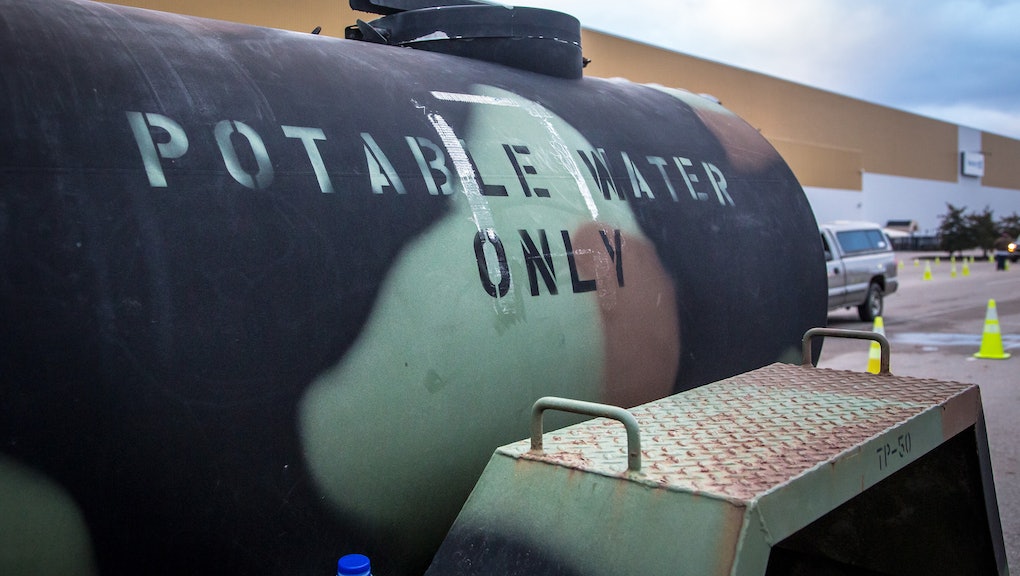 The news: On Sunday, West Virginia’s Charleston Gazette revealed some curious details about Freedom Industries, the company behind the disastrous chemical spill that has, since Thursday, left more than 300,000 of that state’s residents with tap water that’s unsuitable for drinking or even, it seems, touching. According to the newspaper’s report, one of Freedom Industries’ two founders, Carl Lemley Kennedy II, is a felon and “edgy guy” who has been convicted of both tax evasion and cocaine dealing.

Kennedy’s cofounder, Gary “I would appreciate it if we could wrap this thing up” Southern, hasn’t commented on the spill since Friday night, when he gave an infuriatingly brief and evasive press conference, bottled water in hand.

Levels of the chemical spilled into the water supply — 4-methylcyclohexane methanol, a foaming agent used to wash mined coal — are continuing to decrease, and water service has been restored for some residents, but a state of emergency remains in effect for nine counties. The licorice-smelling substance in question can cause, “severe burning in [the] throat, severe eye irritation, non-stop vomiting, trouble breathing or severe skin irritation such as skin blistering,” according to West Virginia’s Department of Health and Human Resources, leaving residents to depend on truckloads of bottled water.

The background: The Freedom Industries spill has highlighted West Virginia’s long and complicated relationship with the coal mining industry, which has been responsible for 5% to 7% of the state’s gross domestic product, and is essential to electricity production throughout the eastern United States. While contemporary surface mining techniques have proved less immediately hazardous to workers than traditional methods, as they rely more heavily on the use of machinery and open-air mining, they have also resulted in a scarred and pockmarked landscape, and the elimination and contamination of a number of Appalachian waterways.

In 2000, for instance, Massey Energy, then the largest coal producer in Central Appalachia, was responsible for a coal slurry spill in nearby Martin County, Kentucky, that was more than 20 times larger than the Exxon Valdez spill by volume, and which contaminated 100 miles of rivers and streams. Even when things have gone as planned, techniques such as mountaintop removal — in which peaks and ridges are demolished down to the vein of coal, which is extracted before the mountaintop is “replaced” — have led to the elimination of more than 1,000 miles of streams, thanks to targeted environmental deregulation that took place at the tail end of former President George W. Bush’s last term.

The takeaway: The Freedom Industries spill seems to be perfect evidence that there are large-scale and costly problems that simply cannot be prevented through industry self-regulation and market corrections, let alone cleaned up by the same.

Both King Coal-sized outfits like Massey, which was absorbed into an even larger energy company, and scrappy outfits led by questionable local entrepreneurs, like Freedom Industries, need rigorous oversight. Unfortunately, the spill also points toward the fact that states that depend on mining revenue may need outside help when it comes to enforcing regulations. A New York Times investigation found that West Virginia’s Department of Environmental protection largely preferred to, “let polluters escape punishment if they promised to try harder,” (emphasis mine) and that thanks to a loophole, the tank that ruptured on Thursday hadn’t been inspected by state or federal authorities since 1991.

That, or we can continue to leave the health of our waterways to ex-con executives who are best described as, “kind of a character” and “a slow learner,” and use our taxpayer dollars to cope with the result.

Note: The headline of this article has been updated.