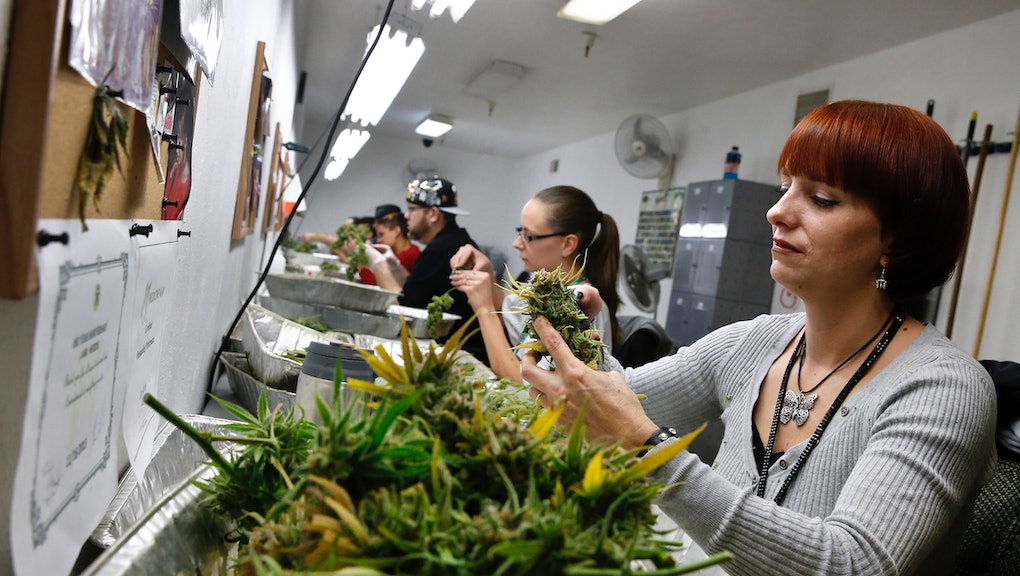 Why Stop At Weed? The Case For Legalizing Cocaine, Heroin and Every Other Drug

Now that Colorado and Washington state have nullified and defied federal law by re-legalizing marijuana, it is the time to re-legalize all drugs and kickstart the domino effect that will finally put an end to the disastrous war on drugs.

Since marijuana is a comparably safe drug to legal products like alcohol and tobacco while also providing numerous medicinal benefits to people with terminal diseases and those facing excruciating pain, it is easy to see why a growing majority of Americans think that marijuana should be legalized.

But cocaine, heroin and LSD? Surely legalizing these drugs would amount to anarchy, chaos and mass addiction, right?

Well, not exactly. Like nearly all programs, government prohibition — with the supposed goal of reducing the use and access of drugs — has achieved the exact opposite results.

Americans have been forced to cough up at least $2.5 trillion since the drug war began and have incarcerated one in every 100 Americans.  Prohibition drives up the price of drugs above market rates, leaving violent cartels as the only suppliers in the same way that alcohol prohibition saw the creation of organized crime.

Despite near-universal criminalization, drug use has skyrocketed. Many current and retired law enforcement officers — who have witnessed the drug war's insanity first-hand — are calling for drug legalization.

The war on drugs is also incredibly racist, disproportionately harming minorities and the poor.

It may seem counterintuitive, but complete drug legalization would be the best possible way to achieve the goals drug prohibitionists claim to support.

For example, a decade after decriminalizing all drugs, Portugal has witnessed a significant drop in addicts and drug abuse, the number of infections from intravenous needles, and drug-related crimes. Doctors and health experts in Portugal have recently praised the decision to decriminalize drugs, an atmosphere where "the vast majority of problematic users are today supported by a system that does not treat them as delinquents but as sick people."

The war on drugs takes a private and/or family matter and turns it into a national one, where highly militarized police are given the authority to ignore constitutional restraints on their power and erect a police state. Proponents of the drug war claim that drugs will ruin your life, and there is obviously some truth to that. But their solution is to use force, fines and cages to make sure that it will ruin your life.

However, nearly all of the problems associated with drugs would be solved or highly diminished by allowing them to be sold and regulated by the free market. Pharmacies, not heavily-armed cartels, would provide heroin and cocaine for a fraction of the price. There is a reason why you don't see gun-play between Budweiser and Coors truck drivers. Their disputes are handled in courts because alcohol, despite the addiction and damage this drug causes, is legal and sold openly.

While I would fully support Colorado and Washington (or any state) seizing the momentum from this recent marijuana legalization and ending the drug war in their respective jurisdictions, we may not have to wait for states to take the lead in order to establish some sanity in our drug policy.

Thanks to modern technology, it is becoming easier and easier to circumvent oppressive state laws. Even though the FBI shut down Silk Road, the business model of offering lower-cost illegal drugs to those who want them using the cryptocurrency Bitcoin will undoubtedly be imitated in the future and will be nearly impossible to stop as technology gets better and better. While the state's drug policy is to abolish the Fourth and Fifth amendments and build thousands of prisons to centrally plan and manage our lives, the Silk Road model offers a peaceful, free market alternative.

Jury nullification also represents a potentially fatal blow to the drug war without waiting for legislation. Through this, juries can refuse to deliver a guilty verdict because they think the law is unjust, the law is misapplied or the punishment is inappropriate.

Jury nullification is enshrined in the Sixth Amendment, and although prosecutors and judges don't want juries to know about it, it is a right that goes all the way back to the Magna Carta. In New Hampshire, jurors have already used it to dismiss cases against people who have technically violated drug laws but did not harm or aggress against anyone. It is one of the most powerful tools we have in protecting civil liberties and checking state power, and if universally adopted around the country, would essentially end the drug war completely.

Fundamentally, we should abolish the drug war because the government has no right to tell individuals what they can or can't put into their bodies in the same way that they can't tell us which books we can or can't read or which religions are legal or illegal. Think about all the damage that has been done by bad ideas, evil books and crazy religions; but does that mean that we should ban free speech?