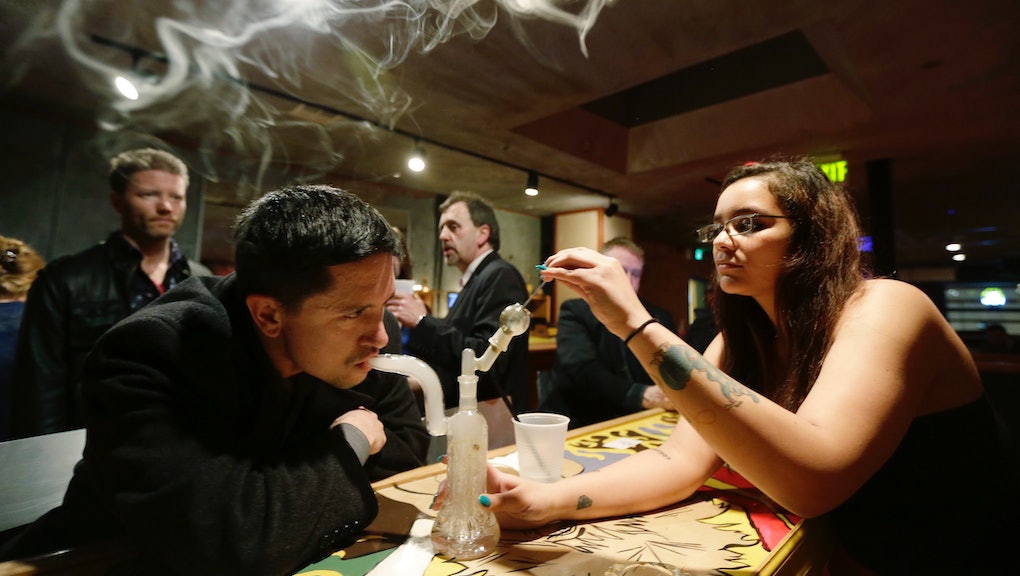 Why Legal Weed in Colorado Could Be a Disaster

There's been a lot of buzz about marijuana recently. New Hampshire, Washington D.C., and Alaska are all making moves while Washington and Colorado are already lighting up. For many, it's high time things began to change.

But while writers across the country are still having a field day describing the Colorado marijuana experiment, they have neglected the spillover effects on the other 49 states, especially those that share a border with Colorado. The temptation of interstate trafficking will grow stronger as the price of weed falls, which could be disastrous for future pro-marijuana policy.

To understand why interstate trafficking could be a problem, let's look at Colorado's neighbor with some of the most expensive black market marijuana in the country: Wyoming. According to recent reports in Colorado, the price of an ounce of legal, high-quality marijuana for recreational use is pushing $400. According to the user-sourced PriceofWeed website, that's nearly double the price of what can be found on the Colorado black market ($236.47), where the state's 25% tax doesn't play a role.

Wyoming, on the other hand, isn't so lucky. If you want to get stoned in Wyoming, pay up: an ounce of high-quality weed on the black market is nearly as expensive as it is in Colorado's new stores, at $354.03 on Jan. 13.

Notice anything strange about the graph above?

If you spotted the bizarre price difference between an ounce of high-quality and medium-quality weed in Wyoming, you're on to something. How could this be? There are a couple of potential explanations:

Statistics and computational errors. In the math world, 94 random people should be enough to make decent numerical estimations, but when the quoted prices vary as much as they do for high-quality weed in Wyoming (cheap = $210, expensive = $500), this number could be way off. But the website notes above that they correct for outliers.

The beauty of the black market. Nobody knows how much anything is really supposed to cost!

My guess is that it's a combination of the two: Some ignorance about the true price is creating a lot of noise in the statistics, which is what's giving us the funny numbers we see above. Either way, it is considerably more expensive than the weed in Colorado – the illegal kind, that is.

With the legal, transparent marijuana markets so close to Wyoming, and the residents' significant confusion about how much an ounce of marijuana should cost, Wyoming could be turning into breeding grounds for heavy interstate trafficking and political problems. If the price ever drops for legal weed, buyers (and more importantly, sellers) will want to capitalize on the cheaper weed in Colorado, and the incentive to move legal weed across the border will get higher and higher every day.

This already happens every day, and it's called the black market for marijuana. However, the trafficking of legally purchased marijuana could unleash a whole new set of problems, many of them political.

We could expect law enforcement to get involved if interstate trafficking became a bigger problem. If certain strains are traceable back to specific retailers or if law enforcement can prove that the marijuana came from legal retailers, it could put some businesses in jeopardy and could inspire states to crack down on their borders. If you think that could never happen in the U.S., don’t forget what the Drug Enforcement Agency is capable of.

We could also expect for anti-legalization political figures and leaders to claim this as a victory and label Colorado's experiment as a failure. Many are looking for the first opportunity to label it as such, and are trying to prevent it from catching on in their state. The transfer of legalized marijuana from Colorado to another state like Wyoming, where it is illegal, would increase the size of Wyoming's black market and only create political problems. This could be quite damaging to the pro-legalization movement and could seriously slow down political progress for future states.

For now, the price of legal marijuana is probably too high for this to become a serious problem. But if the price falls and continues to fall, interstate trafficking could grow rampant, creating problems both for the law enforcement trying to stop it and for the pro-legalization individuals that want Colorado's experiment to look like a success.