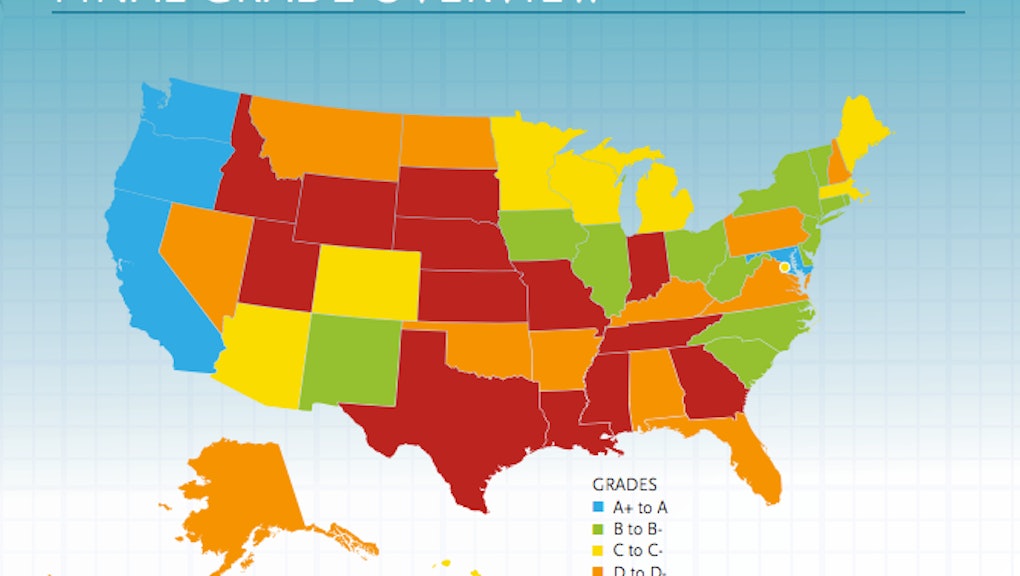 Is Your State Failing Women? Check This Map

If you could grade your state when it comes to its reproductive rights record, would it even pass?

That's what the Population Institute set to find out. Despite the Affordable Care Act's significant impact on women, America lags behind when it comes to ensuring women's reproductive rights are protected. Half of all pregnancies in this country are unintended, and our teen pregnancy rate is higher than most developed countries. Family planning clinics have become the Republican Party's new punching bag, while ludicrous laws regulating everything from water fountains to the size of janitor closets are being used to shut down clinics, under the guise of "safety." Because nothing makes me feel more protected than knowing that brooms are stored comfortably.

Thanks to the GOP's quest to take away women's right to bodily autonomy, many states in America are failing when it comes to women's health. The Population Institute, a non-profit organization that specializes in reproductive health, gave the United States a C- grade in its latest report. That means if America was a student, it would probably need to be grounded by its parents.

So how does you state fare? Take a look:

For a more detailed look, look up your state and the grading criteria in the charts below.

Just like every class you took in high school, some brought the average up, while others pulled it down. Some states like California totally aced it (A+), while Texas didn't even bother to show up to the test (F-). If this were high-school, Rick Perry would be the guy that fell back one grade because he failed at female anatomy (and basic math), and Jerry Brown would be the sensitive quarterback that all the ladies fawn over because he thinks we should have, you know, basic rights to control our own bodies.

Juvenile high-school jokes aside, the wide range above exemplifies one of our nation's biggest problems: the massive inequality when it comes to access to family planning and reproductive health services. While California passed a law extending abortion rights by giving more practitioners the ability to carry out first trimester abortions, Texas passed an unconstitutional ban against the procedure after 20 weeks and forced one third of its clinics to close, making abortion virtually inaccessible to thousands of women. While Oregon debated a total of ZERO anti-choice bills this year, Kansas opted to sign a draconian law declaring that life begins "at fertilization." One thing is clear, where you're born really matters if you'd like to exercise your right to reproductive health.

Here's how the states were judged:

It's also important to remember that a woman's right to abortion in this country doesn't depend only on where she lives, but also on what she has. Some of us can afford to travel to an abortion clinic, even if it's hundreds of miles away, while others cannot. Some patients simply cannot afford the cost of transportation, childcare, and accommodation in states where there's a mandatory 72-hour waiting period (oh, and where the weekend "doesn't count" (I'm looking at you South Dakota)). And that's without even factoring in the actual cost of the procedure between $300-950). Even in California, where anti-choice laws are a rarity, women living in rural areas still live up to 150 miles away from a clinic. That's too far.

Further, if we factor in that the rate of unintended pregnancies is highest amongst women of color (mostly due to the lack of availability to contraception), and that these women are more likely to struggle to pay for their abortion (mostly due to the intersectionality of income and race), it becomes clear how restrictive it really is for women to get an abortion.

Abortion should be accessible for all women, not just for some women.

The bottom line is that even if your state has a good grade, it might not mean that reproductive health is achievable. Let's make sure every woman has the opportunity to make decisions about her body. No matter where she lives, what her skin color is, and no matter what she makes, she should have access to the same reproductive rights as everyone else. They're called rights for a reason.