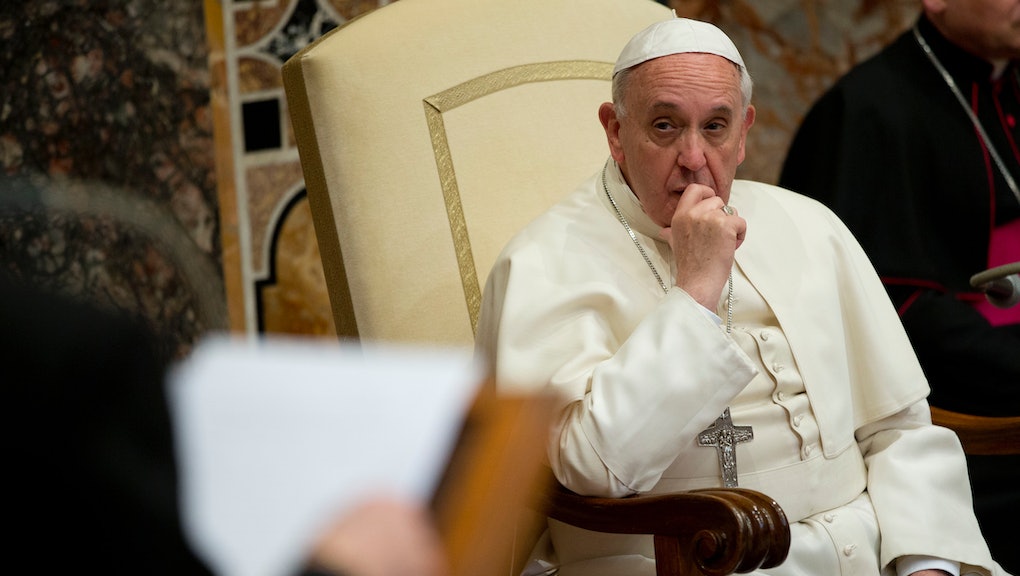 In One Word, Pope Francis Makes Clears He's Not the Progressive We Hoped For

The news: Sorry, young liberals — Pope Francis isn't going to be an ally on abortion rights.

The pontiff made his harshest remarks on record about abortion during his yearly "State of the World" address to diplomats sent to the Vatican on Monday. In one word, he made clear that he's not the progressive many women had hoped for, calling the practice of abortion "horrific."

"It is horrific even to think that there are children, victims of abortion, who will never see the light of day," he said during a section on the rights of children.

"Unfortunately, what is thrown away is not only food and dispensable objects, but often human beings themselves, who are discarded as unnecessary."

The brief remarks on abortion came at the end of an address which called for greater peace and understanding around the globe, as well as which cited the use of child soldiers and human trafficking as crimes against the world's children.

"Sadly, there is a general indifference in the face of these tragedies, which is a dramatic sign of the loss of that sense of responsibility for our brothers and sisters on which every civil society is based," Francis added.

Though it's often difficult to know what's going on in the closed-off world of Catholic hierarchal politics, the pope's remarks will be welcome news indeed to conservative bishops and members of the Church who wish he toed the party line more evenly. After the pope called for the Church to get rid of its "obsession" with abortion and other social issues in a historic interview with Jesuit magazine Civilta Cattolica, Bishop Thomas J Tobin of Providence called for the pope to attack "the evil of abortion" more directly

Why you should care: Though his mention of abortion was brief, it's still important. Plenty of people have taken the pope's previous exhortations for the Church to focus more on community-building and projecting an image of inclusiveness as evidence that he's significantly more liberal on social issues than his predecessor, Pope Benedict XVI. But it's the same dogma with a friendlier spokesman.

For example, Auxiliary Bishop Charles J. Scicluna of Malta said the pope told him in a private conversation that gay marriage and adoption rights constitute an "anthropological regression." And the pope hasn't changed long-standing Catholic dogma such as the notion that only men can be priests.

As the New Republic's James Bloodworth writes, "Pope Benedict was a PR disaster for the Church. Yet under Francis little of substance has actually changed. The Catholic Church continues to vehemently discriminate against gay people and women, it's simply sugar-coated its message with fashionable sound bites about inequality. And depressingly this has worked."

Moreover, the Catholic Church is far bigger than one man — even one who supposedly speaks directly to God. The pope can smile and put on a nicer face for the church, but it's still a sprawling institution which carries most of the same problems it did under the less-beloved Benedict.

Meanwhile, even his much-vaunted economic "liberalism" falls well under church doctrine, which has railed against capitalism for a century. Why wouldn't it? Capitalism shifts the locus of power away from religious institutions like the church.

The bottom line: By all accounts, the pope is a nice guy, and he truly seems like he cares about the world's poor. He is a massive improvement on his predecessor, who could not carry the church into the modern world. He has done a lot of good in his position. But don't confuse him for an ally of the liberal left.