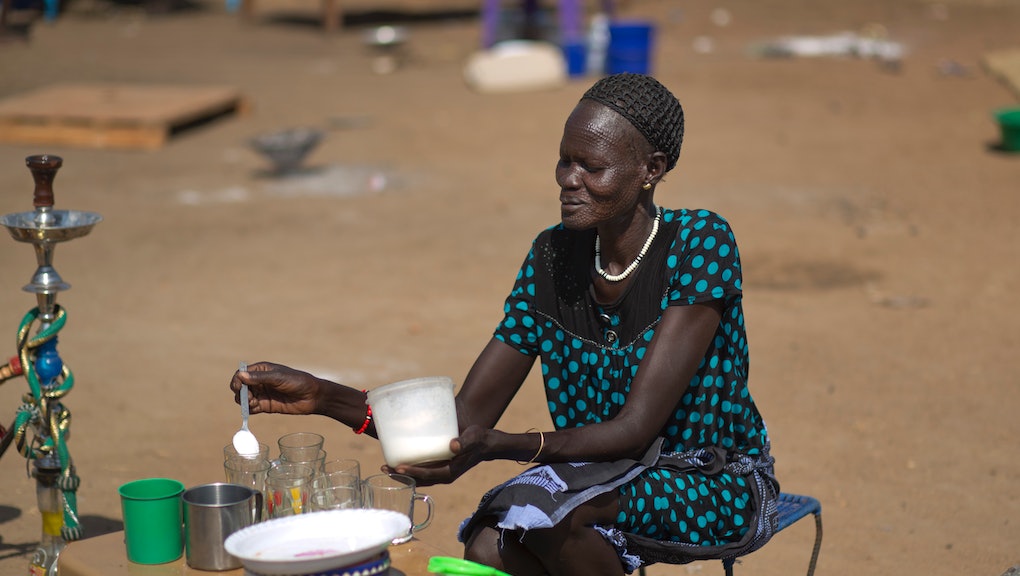 The Trouble With South Sudan Peace Talks Might Be the Men

The one fact that people love to mention about South Sudan is that it's the world's youngest country. It was created back in 2011, after 20 years fighting for independence. Now a deep political rift has sparked fresh violence and killing, which is threatening to tip South Sudan back into major conflict. Depending on which side you talk to, former Vice President Riek Machar was planning a coup when he was thrown out of office last year. Or President Salva Kiir was too intent on keeping power to himself and he simply dismissed his critics — in this case, the entire cabinet.

I've talked to both sides, and unsurprisingly, their accounts of how this latest conflict started and who is to blame are very different. Regardless of how we got here though, the young South Sudan is a hot mess.  If you check out pictures from the peace talks going on in Addis Ababa, Ethiopia, you can't help but notice how many men are at the negotiating table. Nyaradzayi Gumbonzvanda, General Secretary of World YWCA, tweeted at me recently, "Where are the women in the South Sudan peace talks?" I was tempted to respond, "Making the snacks." Instead, I filed away my sarcasm and did some proper research.

They may be hard to spot, but there are three women at the peace talks: Sophia Pal, Bonguot Amum and Sarah Nyanath, who are all South-Sudanese politicians. They take turns at the negotiating table, so it's easy to miss a single woman amongst so many men. They piled into a hotel room to chat with me about the secret sauce that women can bring to negotiations.

First, they said it's important to remember that 65% of the population is made up of women and children, so the role of women in peace-building is critical. You only have to watch the news and see the excruciating pictures of women and kids fleeing the fighting to understand who the innocent victims are. They each take the phone to make passionate points: "There's no country you can lead without the contribution of women … women have kept communities together … we don't have a tribe because we're united as mothers, sisters, grandmothers … we're neutral."

These are powerful arguments from the female politicians ,and it's possible they could help, but right now, only the opposition's delegation has female negotiators. At the moment the talks have stalled. The government is pushing for a ceasefire; the opposition wants detainees released first so they can take part in the talks; nobody is ready to make concessions. Perhaps I'm being too quick to join the dots, but maybe women talking to women could help get things moving. Just sayin'.