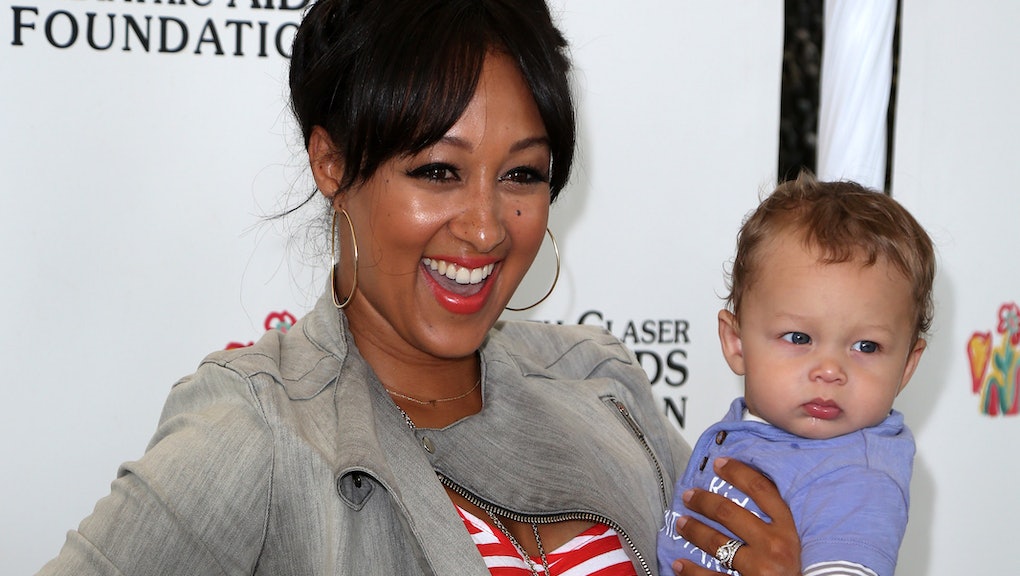 If you haven't seen this clip of actresses and twin sisters Tia and Tamera Mowry's interview on the OWN network's Where Are They Now, you might still believe we're living in a post-racial society. You'd be wrong.

In the clip, Tamera Mowry, who married Fox News correspondent Adam Housley in 2011, revealed the criticism and ignorance she's faced in response to her interracial marriage. As I watched, I couldn't help but give a head nod to the fact that black women are continuously denied the complexities and truths that make them human — even as pop culture tries to convince us otherwise.

Of the insults Mowry tearfully admitted to receiving, the most vile include being called a "white man's whore" and being told that her sister Tia is a "true black woman" because she married a black man.

(Ironically, Mowry herself is biracial — the product of a black mother and a white father. If these insults are the result of some perceived racial identity that Mowry is accused of abandoning, then she has the right to identify with whichever race she chooses.)

Being black is not a result of who you marry. It is barely defined by the color of your own skin. As journalist and cultural critic Touré notes, there is no "correct or legitimate way of doing blackness" and any attempt to create such an exclusionary definition is akin to cultural bullying.

In a time when we're celebrating our Olivia Popes and Mary Janes — three-dimensional portrayals of black women on screen — why is Tamera Mowry being bullied?

We raise our hands in praise of Kerry Washington's portrayal of a vulnerable yet fiercely determined black woman involved in a love affair with a white man, but when we peel away the decadent glow of primetime TV, it seems many are still offended by something as innocuous as interracial marriage. We judge, attack and question the blackness of a woman who has decided to love for the purest reason of all, despite our repeated requests for black female leads who are free from the confines of the "strong black woman" stereotype. Why, in living the life she has chosen for herself — certainly an act of strength and power — does Mowry's blackness suddenly come into question?

We demand that our fictional black women reflect the realities of real women, all women, living in the 21st century, and then chastise someone like Mowry for fulfilling that truth in real life. It makes me wonder what good at all the success of shows with black female leads like Scandal, Being Mary Jane and Sleepy Hollow truly means in the first place.