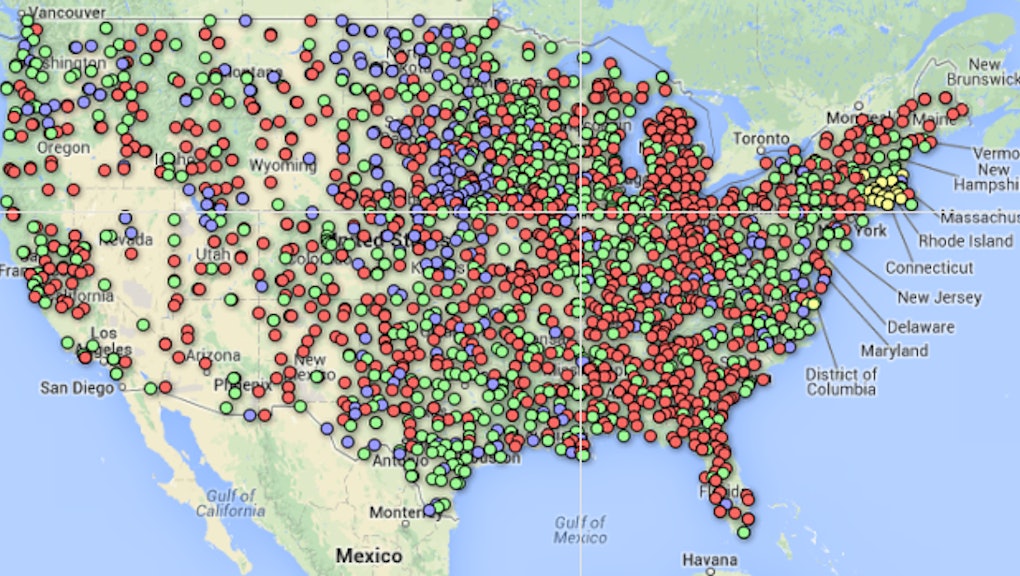 Half of U.S. Counties STILL Haven't Recovered From the Great Recession — See This Map

The news: Here's something you probably suspected, but never had the proof for: About half the counties in the U.S. are still deep in the throes of the Great Recession.

Four-hundred counties saw no hit to their GDP from pre-recession levels. Large counties with big cities and/or high populations have recovered nicely from the recession. But 800 counties had prerecession employment levels in 2013. These are largely grouped in the Midwest and South. Only 54 of those had gotten back up to par on employment by the end of the year.

In other words: If you live in a big city or a densely populated area, it's much more likely that you've felt the economic recovery than if you live in a more rural area or in the South or Midwest. For some, the economy is still worse than it was in December 2007. Despite the much-vaunted recovery, large stretches of the country have been more-or-less abandoned by national policymakers.

Which areas are doing worst? In the Great Lakes region, Detroit, Chicago, and Cleveland are all lagging behind pre-recession levels of GDP. Most of Florida is doing terribly, including Tampa and Miami, as is much of the Southwest. Las Vegas isn't doing super well. And rural areas in the Northeast, including upstate New York, Vermont, and Maine have done particularly badly.

Meanwhile, the areas that weren't hit by the recession at all aren't necessarily all filled with cartoon capitalists smoking cigars, counting their money through squinty little monocles. Much of North and South Dakota, Nebraska, Kansas, and Wyoming weathered the storm, presumably due to the ongoing shale oil boom.

The map is littered with nodes of recovery around major cities, surrounded by their poorly-performing neighboring counties. With little investment and increasing migration to cities in general (though not necessarily big Eastern ones), this trend makes sense.

Nationally, we're still recovering — but very slowly: 47 million Americans remain poor enough to qualify for food stamps, while the unemployment rate is falling, that might just be reflecting the number of people dropping out of the workforce entirely. Around 350,000 Americans gave up looking for work in November, or four times the amount of jobs created.