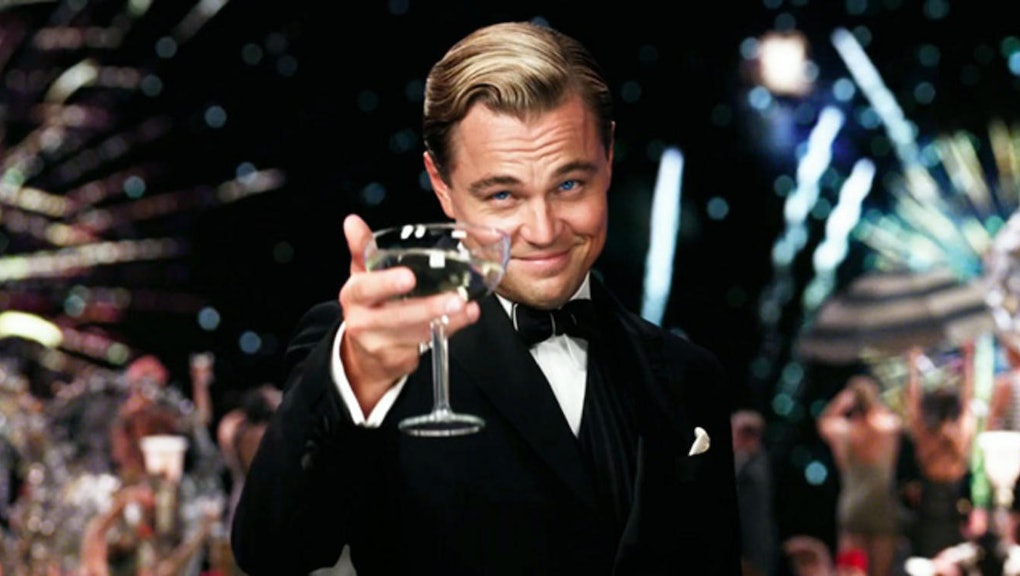 As chronicled last week in the Wall Street Journal, Golden Globe winner and noted wolf of Wall Street, Leonardo DiCaprio is set to blast to infinity and beyond this year by boarding Richard Branson's Virgin Galactic ship for its first launch.

In 2008 DiCaprio noted that Americans are "the number one leading consumers, the biggest producers of waste around the world" not long after he went full Al Gore, producing and narrating The 11th Hour, a 90-minute documentary posterized with a boot's imprint on the globe.

DiCaprio also sits on the boards of numerous environmental groups, including the National Resources Defense Council.

Branson, too, is a longtime environmental advocate. The Wall Street Journal notes he founded the Carbon War Room, which "has long advocated for carbon pricing and energy efficiency measures that help alleviate global warming."

Branson said the carbon emissions from a trip to space have been sliced in half and that the voyage's environmental cost will be "less than the cost of an economy round-trip from Singapore to London," as opposed to a couple weeks of New York City's entire electrical supply.

If only it were true. The FAA's assessment of launch and re-entry pegs the carbon footprint as five times that of flying from Singapore to London, with the entire operation notching that figure up to seven times more.

In sum, "a single trip on Virgin Galactic will require twice as much energy as the average American consumes each year."

It's the rest of us who are "the biggest producers of waste around the world," yet here's DiCaprio, in all the self-righteous preening one can muster, accounting for twice what we do in a single year.

This isn't the first time Leo's went on a vendetta ride against the icebergs. He rang in 2013 in real Gatsby style, hopping on a chartered 747 from Australia to Las Vegas. That's a distance of 7,717 miles when some calculations show every 2,062 miles accounts for one ton of carbon emissions per person on a plan that size.

That means the greenest of green celebrities rang in a new year with over 3.7 tons of carbon emissions. It's not the first time he's come under fire for an apparent inability to avoid flying private. Quizzed about travel habits, DiCaprio quipped that he tried "as often as possible to fly commercially."

That's in line with saying "I will fly around the world doing good for the environment," which he did near the end of 2013.

Al Gore's jet-setting ways have long been an inconvenient truth to his purported message.

The former vice president famously lamented "I sometimes have to charter" on Jimmy Kimmel Live. His selling out to Al Jazeera last year was met with near-universal derision; pundits ranging from conservatives to Jon Stewart and Dave Letterman grilled him over the hypocrisy's stench.

"You had an opportunity to make a statement about your principles," The Daily Show host said. "Some people feel, I as well, that it was an odd move … because it is backed by fossil fuel money."

The business deal isn't the issue; it's the fact that time after time celebrities and big-name personalities shove radical notions at the rest of us without practicing it themselves.

If Gore felt like being intellectually honest, then his own house would've found a place in his infamous documentary.

An early 2007 study by the Tennessee Center for Policy Research placed the utility costs at his Nashville home to roughly $30,000 a year, a figure larger than the per capita income of the entire city, $27,372. The raw energy usage totaled 221,000 kilowatt hours; the national average at the time was just 10,656.

None of that was mentioned in Gore's publicly bemoaning fossil fuels in the pursuit of an Oscar.

In the same sense, voyaging into space isn't so much the problem.

In and of itself, the achievement appears laudable, but here again we see a celebrity ponying up for something he'd likely admonish the rest of us for even considering.

For their cause, it does nothing. DiCaprio's ideas are unlikely to incense anyone when they hear he'll be using twice the energy we do in so much less the time. Branson has pushed a false narrative about the entire project's cost to the public, undermining his bona fides from the get-go.

A Virgin Galactic representative confirmed the FAA's tally of the environmental cost but it's safe to bet you won't hear the same from either of the two who'll be getting the lion's share of the questions.

The DiCaprio-Branson adventure is, if anything, a thoroughly unnecessary uptick in energy consumption, further enabling elites to consume energy at a rate more rapid than the ones they condemn for environmental neglect ever could.