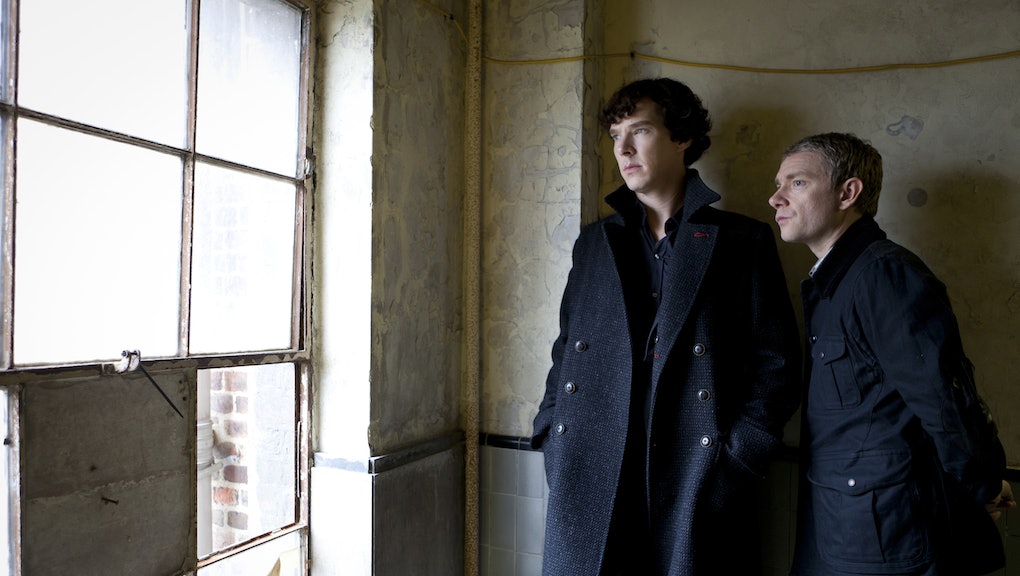 'Sherlock''s Watson Is "Not Gay," But He's Not Straight Either

After over two years of waiting, I was so excited to watch the season three premiere of BBC's Sherlock (don't worry Americans, it's premiering in the States on Sunday). And as much as I loved the episode, the scene I thought about most afterward was one that rubbed me the wrong way: it was the scene when John Watson insists to Mrs. Hudson that he is "not gay" after she is surprised to hear that Watson is planning to propose to his girlfriend.

Watson has made this clear several times in previous episodes, and I believe him, I don't think he's gay. Everything I've seen suggests a genuine physical and romantic attraction to women, including his new fiancée, Mary Morstan.

But what bugs me about Watson's response to Mrs. Hudson is the pretty glaring reality that he does love Sherlock and wants to spend his life with him.

Now, no, I still don't think he's gay and I wouldn't say he's bisexual, but that's my point! Watson doesn't have to be gay to feel the way he does for Sherlock. Watson's comment seems to indicate that he's partially struggling to understand his feelings for his best friend because he's previously only been able to understand these feelings under the "gay" heading, and he knows he's not that.

But that's not his only option. It is, however, the only option he seems to be presented with.

Often when a character demonstrats feelings for a character of the same sex, they're labeled as gay, even if they've been exclusively heterosexual up to that point. It's known as the "No Bisexuals" trope, and it's a form of bisexual erasure: assuming that one can be only straight or gay. It ignores not just the experiences, but also the very existence of bisexual people.

One show that follows this trope is Buffy, with Willow Rosenberg becoming a lesbian after breaking up with her boyfriend. We also see a version of this with Piper Chapman of Orange is the New Black. Although she is shown to have had relationships with both men and women, she's called an "ex-lesbian" instead of bisexual.

Similar to the No Bisexuals trope is Heterosexual Life-Partners, more commonly known as "The Bromance." This is another means of avoiding bisexuality, and often becomes queer-baiting when used as an excuse to walk as close to the line as possible without ever having to make one or more of the characters come out as non-heterosexual.

And while this particular trope may fit Sherlock and Watson well, it's not quite good enough because assuming Watson is bisexual doesn't quite work either. It's more likely that he is bi-romantic or heteroflexible, meaning that he could have romantic feelings for men and women or, while usually being attracted to only women, there could be men that interest him sexually.

As is especially true with the introduction of Mary Morstan, who not only understands how important Sherlock is to Watson, but actively encourages the two to spend time together and reconnect, the show offers a great opportunity to explore a variety of non-heterosexual and non-heteroromantic relationships.

What's interesting is that this process seems to be much easier for Sherlock, who is otherwise largely socially inept. We never see Sherlock struggling with or denying his affection and need for Watson, even though the way he's expressing those feelings may look different than we'd expect. But really, this makes sense. It's doubtful Sherlock gives much care or thought to labels like orientation, so there's no need for him to feel held back by them. Watson, on the other hand, can't seem to get over them, hence his continued insistence that despite whatever he may feel, he's definitely not gay.

To be clear, I do see a difference between how Watson loves Sherlock and how he loves Mary, as well as the kind of life he wants to have with each of them. But one doesn't make the other any less valid, nor does one cancel the other out.

The long history of Sherlock Holmes and John Watson offers an amazing depth of human relationships to explore. The show does itself — and its audience — a great disservice by limiting themselves in this scope. Everyone knows that John and Sherlock love each other, but it's up to the show's writers and producers to frame this relationship. Language is vital here — language is representation. As long as Watson and Sherlock's relationship remains limited to a flawed binary of straight or gay, fans like me will always feel there's something more significant and more realistic that the show is leaving out.