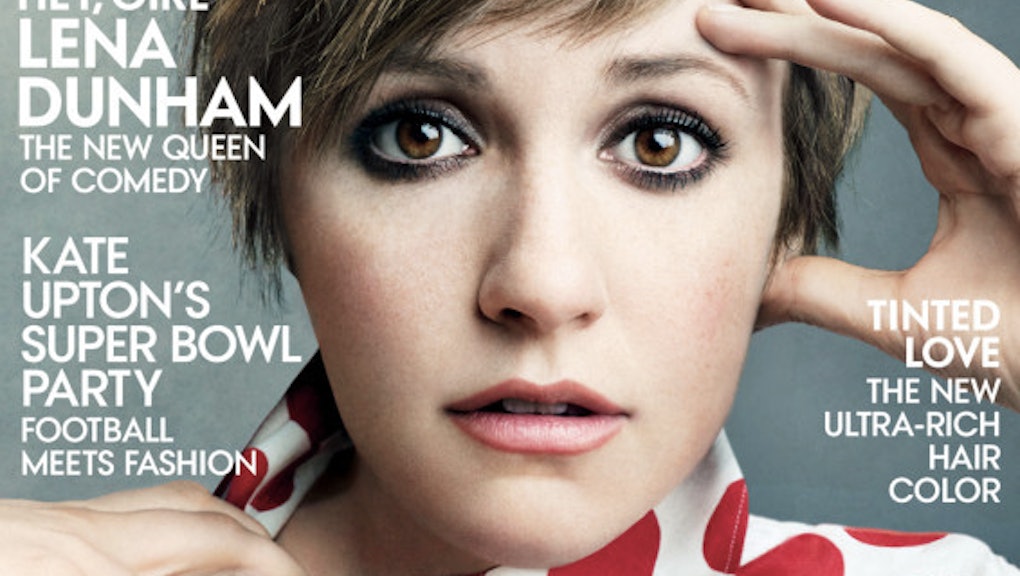 Lena Dunham puts most 27-year-olds to shame. While at that age my proudest accomplishment was sticking to the same job for over a year, Dunham has already received seven Emmy nominations and won two Golden Globe Awards. Now, she's adding Vogue cover model to her list of impressive credentials, and with it comes a story bursting with the young star's personality and wisdom. Here are some of her best quotes from the fashion magazine.

2. On the "unlikely" pairing of Dunham's character with Patrick Wilson's handsome doctor

"It's like, 'Have you been out on the street lately?' Everyone dates everyone, for lots of reasons we can't understand. Sexuality isn't a perfect puzzle, like, 'He has a nice nose and she has a nice nose! She's got great breasts and he's got great calves! And so they're going to live happily ever after in a house that was purchased with their modeling money!' It's a complicated thing. I want people ultimately, even if they're disturbed by certain moments, to feel bolstered and normalized by the sex that's on the show."

3. On her mindset before meeting boyfriend Jack Antonoff

"I'd been like, 'If I never date again in my whole life, I'll be fine with it! I want to work and rescue rabbits and be a notable eccentric!' I had a whole romantic idea about singledom, and then, of course, that's the moment when you meet someone that you really care about."

4. On being a hermit

"I have a really great private existence, almost more like a memoirist or a columnist would, and less like an actor would. Which I enjoy, because I can't overstate how much I hate leaving the house."

"I had really bad OCD. I was really lonely at school. I felt a lot of shame. Seeing what I thought was people lightening their own load, or lifting their own burdens, by writing about them or singing about them just made the world seem more open."

6. On being a late bloomer

"I thought of myself as relatively unpopular. It wasn'’t anybody’s fault — I didn'’t go to high school with mean kids — but I didn'’t feel part of it ... I didn'’t really start to feel like I had friends in a real way until I graduated from college and became engaged with the people I'’d be engaged with professionally."

7. On success changing you