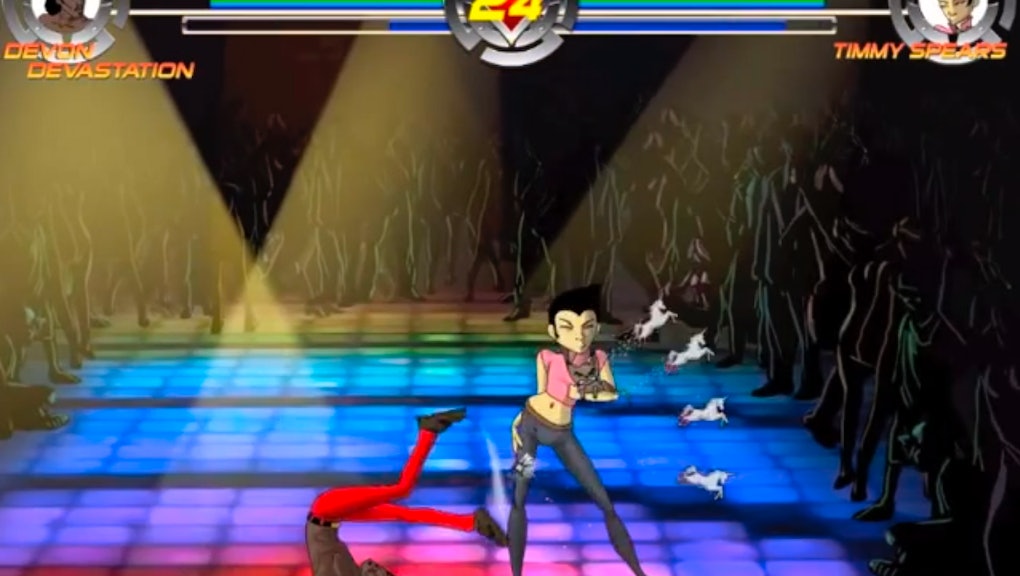 Ultimate Gay Fighter sounds like a bad joke you might hear in the ever tolerant and accepting environment of a men's locker room. In reality, it's a mobile game app that pits gay combatants against homophobes.

Created by developer Michael Patrick, himself gay, Ultimate Gay Fighter has been marketed as "The World's First Gay Video Game … EVER!!!" The story follows several homosexual combatants as they join the Gay Fight competition to defeat the League of Oppressive Self Righteous Zealots (LOSRZ).

The game had the potential, in a very heavy-handed kind of way, to act as a parable for fighting against discrimination. Unfortunately, the end product is far from noble. In its poorly done satire, Ultimate Gay Fighter doesn't combat stereotypes — it perpetuates them.

When punched, characters in the game "bleed" rainbows and a victory message appears that reads, "You win! Congrats, slut." The game stars characters like "No-Nonsense Lesbian" Sapho Ethridge, who has short hair and uses a fighting style called "Scissoring." The only bisexual character is an alcoholic who "enjoys lezzing out" (reminding us that in this world, "bisexual" just means "a girl that's into girls, too").

And the game doesn't stop at offending gay people. The only Asian character is called "this Asian twink," and the only black character is a rapper named "Shawdee Killah" who wears a noose-like necklace (Patrick insists this is inspired by old-school hip-hop).

The LOSRZ includes propagandist politician Anne Paylin, who uses an American flag for "harpooning her most prized prey: Gay Humans." Josh 2.0 is a reprogrammed gay man now out to destroy homosexuality, reducing an entrenched systematic hatred like homophobia to repressed homosexuality. And the leader of the group, "Preach," is a cowboy hat-wearing, crucifix-donning fighter who kills weaker gay people and reprograms the strongest to join his "homophobic army" — a creation that uniformly equates religion with homophobia in a stance that GLAAD itself has spoken out against.

It may have been easier to view Ultimate Gay Fighter in a more positive light had the creator's own statements about the game not been so problematic. Patrick claims his product is not hateful, yet it contains pervasive stereotypes without much added depth nor humane characterization. And when confronted with the fact that the game focuses primarily on the American gay male to the exclusion of other under-represented groups, Patrick said that the game has no transgender characters because he "could not think of something creative" and "wanted it to be funny."

He also states that no games represent the gay community, and the ones that do are "small and esoteric." Yet, Mass Effect and Dragon Age are just two examples of blockbuster games that have successfully created gay characters; they simply don't have them don Chihuahuas or dress up like rainbows (which isn't the norm for most gay people).

Patrick adds, "If you allow yourself to make fun of a stereotype in a way that isn't cruel, I think you diminish the power of that stereotype." He also asserts that he himself is "not a stereotype" but has "stereotypical traits." So because he understands the distinction between having certain traits and actually being a stereotype, he should be well aware of which camp his game falls into.

Unfortunately, Patrick isn't alone in creating this kind of outrageously stereotypical gaming world. Fighting games generally have considerably thinner story content than do the already thin norm, so it is perhaps unsurprising that creators evidently feel the only way to drive a point home is to exaggerate the names, clothing and mannerisms of the characters.

For example, this is the Hindu Dhalsim from Street Fighter: a fire-breathing, levitating yogi guided by the "Holy Flame."

Here is the Caribbean Eddie Gordo from Tekken: an Afro-Latino Brazilian capoeira practitioner.

Here is the Indian Savitri "Divinity" Bindra in Tao Feng: officially described as "beautiful, sensual and filled with the heat of passion."

Here is the Shaolin Monk Liu Kang from Mortal Kombat: a renegade monk with strong Shaolin beliefs on everything except violence.

Here is the American Jacky Bryant from Virtua Fighter: an uber-blonde NASCAR driver.

And here is the American Tina Armstrong in Dead or Alive: an uber-blonde WWE type wrestler.

Ultimate Gay Fighter ironically arrives around the same time as the premiere FX's new show Chozen, another depiction of gay life that's filled with unwarranted sexual crudeness and prison rape jokes. But just because stereotyping is the norm — in games and often media in general — doesn't mean it's acceptable.

Ultimately, the game falls into the same trap as films like 300 and Django Unchained. Regardless of Patrick's intentions, Ultimate Gay Fighter upholds rather than destroys harmful stereotypes. And unless the final product is drastically more evolved than the original, it will go down as yet another example of hate masquerading as comedy.