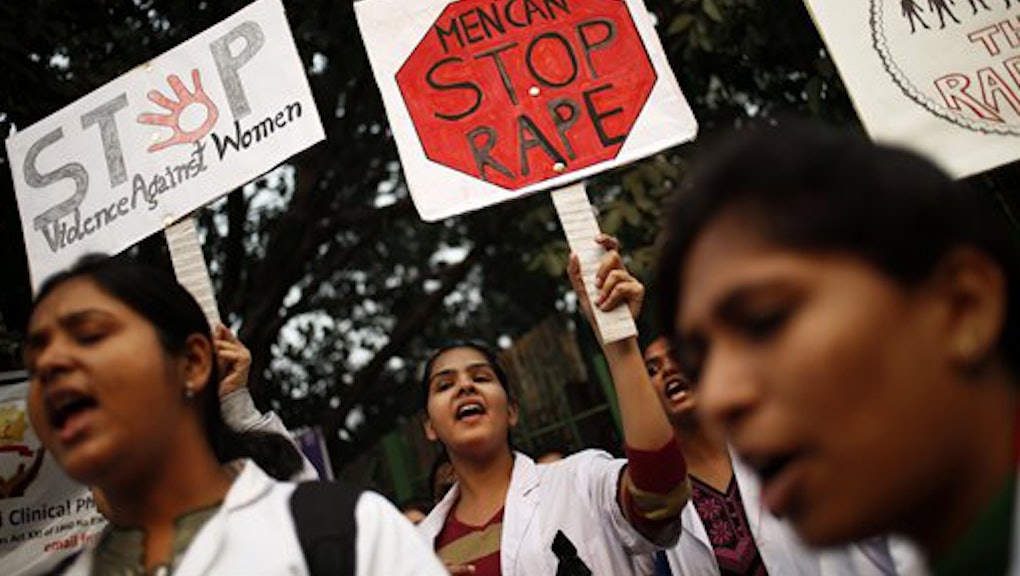 Last month, as India marked the first anniversary of the death of a student who was brutally gang raped on a moving bus in Delhi, a spate of gruesome rapes sent shockwaves throughout the nation. A Danish woman was gang-raped by homeless youth as she passed through Delhi's backpacking district. After being drugged and raped by her taxi driver, a Polish woman was abandoned in a railway station with her two-year-old daughter. On Christmas Eve, a 20-year-old woman from Tamil Nadu was gang raped by two different groups of men within the span of a few hours. And the new year was welcomed with the death of a girl from West Bengal who was set on fire after being raped by her attackers.

A year later after the Delhi rape, it feels as though despite nationwide outrage and massive protests, nothing has changed.

The Indian government would like you to believe it has. In September, the Supreme Court found the four Delhi rapists guilty and sentenced them to death. The parliament passed the Sexual Harassment of Women at Workplace Act, and the $162 million Nirbhaya Fund, designed to increase public surveillance and safety, was integrated into the Union Budget to help victims. Fast track courts were opened, judgements became progressively harsher. The media was unrelenting in its coverage of the brutal rape epidemic, ensuring that the issue never left the public consciousness. Crass politicians, such as Abhijit Mukherjee were publicly shamed for their insensitive, regressive comments. But despite widespread demonstrations and the threat of faster trials, Delhi has seen reported rapes nearly doubled in the last year from 706 in 2012 to 1,330 in the first ten months of 2013.

What was going fundamentally wrong was the transformation of legislation into practice: only one of the 706 reported cases ended in conviction. This is due to the callous handling of victims by their first point of contact with authority: the police. The Indian police, notorious for their inefficiency, are even worse when it comes to rape, often indulging in victim shaming and blaming, or protecting the rapists themselves. In fact, it is often said that rape victims are advised not to go to the police, for fear that the police might rape her again.

Tehelka, a leading Indian magazine, conducted a sting operation aimed at 23 police stations across the Delhi area and revealed this horrific level of misogyny within the police force. Sub-Inspector Arjun Singh, of the Surajpur Police Station, blamed the victim entirely: "She is dressed in a manner that people get attracted to her. In fact, she wants them to do something to her." Another officer claimed, "There are cases but 70 percent involve consensual sex. Only if someone sees, or the money is denied, it gets turned into rape." In fact, 17 of the 30 policemen interviewed by Tehelka stated that "real" rape cases are rare. With the police having an attitude like this, it is no surprise that rape is underreported and rapists are under-convicted across India.

To combat this, Rakhi Birla, the new Women and Child Welfare minister for the "rape capital," Delhi, announced the formation of a team of female commandos, trained by ex-military personnel and martial arts experts, to protect women out on the streets of Delhi. Birla also announced that about 5,000 female rickshaw drivers would be employed to make travelling safer for women.

But these measures are in line with the "women-only" movement that has sprung up in India's metros, thanks to the government's inability to stop rape and harassment. In addition to the already segregated train compartments, Indian women are increasingly seeking out women-only buses, cabs, travel groups and hotel floors, with the city of Coimbatore preparing to open a women-only park. The Indian government has supported this movement by furthering the segregation of the sexes in public life, going so far as to create a women-only bank.

But academics and policymakers have argued that this separation seems to be a means for a patriarchal society to announce that it's not going to protect women: It's simply going to segregate women and restrict their freedom, instead of securing it. The shrinkage of public space in which women feel comfortable and protected does not send a warning message to rapists. Instead, it reinforces the notion that the rapists do indeed have both the physical and psychological power to coerce and frighten women, and get away scot-free.

The argument is not whether women should play a part in ensuring their defense, but rather how large this part should be. If the Indian government has its way, women will be the only ones fighting against rape. This attitude furthers the notion already ingrained in Indian society that women must have brought rape on themselves, which is why they must be the ones fighting against and preventing rape. But rape is not just a women's issue, it is a societal issue. And it is one that must be combated by society as a whole, rather than women fighting alone for their safety and security.