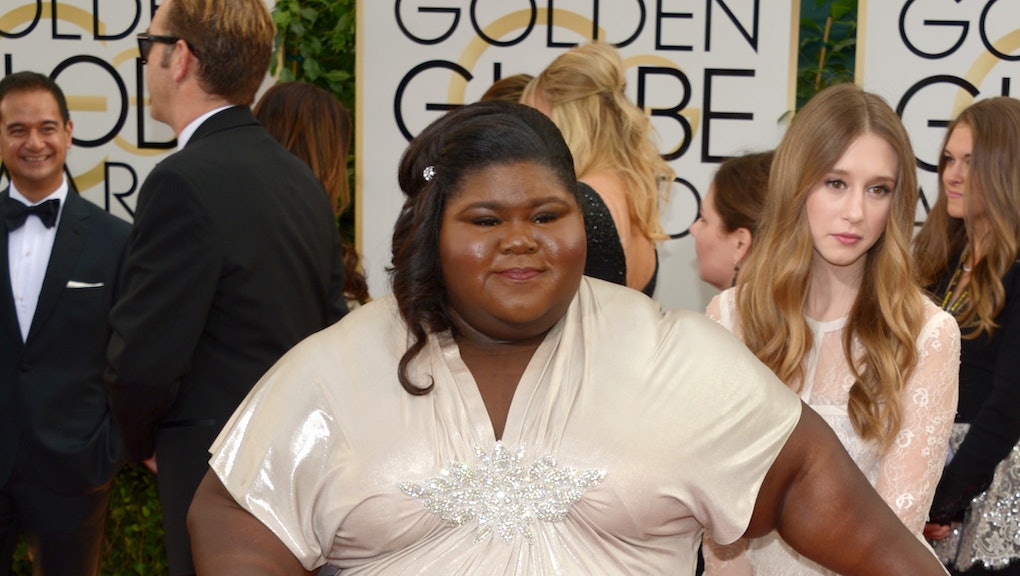 No one is safe, not even the rich and famous, from the acerbic and often downright cruelcyber bullies who litter all corners of the Internet. Twitter and Facebook make it even easier for people to verbally abuse those they dislike, and they can do it from behind a digital alias.

Gabourey Sidibe was the latest to be on the receiving end of some less-than-flattering tweets about her appearance at the Golden Globes earlier this week. Here's a sampling of the hateful things people felt compelled to share:

Not willing to let her haters have the last word, she offered the best Twitter comeback:

It's not always easy to stand up for yourself, no matter how elevated you may seem in society. But your body is yours and yours only, and it's your body that in many ways dictates how you experience the world around you. When your body is under attack for solely existing, it's like your entire self is being fed to the digital lions.

Celebrities are often an easy target for tactless netizens who assume that they won't respond to the hate. And, particularly with female celebrities, that hate often comes in the form of mocking their appearance and their bodies. It would be a very short list to name people in the spotlight who haven't been the target of body shaming rhetoric.

So, in honor of the stunning and always-charming Sidibe, here are five times celebrities took down their online haters by turning their own weapon against them: the Internet.

Cyrus tends to stir the pot, and she's has proven she really doesn't care what criticism is directed at her. But well before she was smoking blunts on stage or causing chaos at the VMAs, she took a real stand against bodyshaming. In 2011, the then 18-year-old Cyrus stood up for herself on Twitter after comments were made about her weight. She said:

"By calling girls like me fat, this is what you're doing to other people. I love MYSELF & if you could say the same … I don't wanna be shaped like a girl I LOVE being shaped like a WOMAN & trust me ladies your man won't mind either."

She went so far as to tweet a photo of bombshell and iconic American beauty, Marilyn Monroe, adding, "Proof that you can be adored by thousands of men even when your thighs touch."

Better known as the beloved Topanga on '90s sitcom Boy Meets World, Fishel married Tim Belusko in October of last year — but her wedding photos didn't just bring notes of congratulations and well-wishes. Instead they brought a slew of mean-spirited remarks from people who had a lot to say about her size. Fishel, who graced the cover of the April 2013 issue of Maxim magazine, was having none of it:

Body shaming isn't just for the plus-size. The English model has had taunts slung her way for being too thin. Notably, after the 30-year-old posted a photo of herself and her mom on Instagram back in 2012, followers said her weight was "unhealthy." When Chung had finally had enough, she responded by showing that on the other side of the Instagram account was a very real, and very literate, human being:

"Hi, I am here. I can read. Ok everyone thanks for the teen angst discussions. People are different sizes. I'm not trying to be thinspo for anyone. I am now making this acct private. Byyyyyeeee."

Lady Gaga has used social media to draw attention to body and beauty issues that permeate our looks-obsessed culture. Last October, while promoting her artPOP project, she re-tweeted many of the tired insults and verbal jabs she's received over the years and responded with photos and one-liners.

In response to those who felt the need to point out her weight fluctuations, she posted a photo of herself wearing a red leather outfit while looking much heavier than she typically does.

Such a response may seem absurd, but it's like giving a big middle finger to everyone who has something mean to say. It's an assertion of who she is, and she's purposely making people look at her "fat" body because it's hers and it's here to stay. Whether you love her or hate her — and Gaga has been receiving quite a bit of hate recently — you have to hand it to her for tactfully and playfully responding to her online critics.

RiRi has become infamous for her sometimes harsh and brutally honest responses to people on Twitter and Instagram. She may not always (read: rarely does) handle situations with ease or a cool head, but she definitely isn't going to take an insult lying down. When one fan thought they'd call the R&B star's hair "nappy," Rihanna only had this to say:

It may not be some witty diatribe, but it's so blunt and honest that it's perfect. Black women are often criticized and pressured to conform to white ideals of beauty, particularly when it comes to their hair. RiRi was right to shut this user down.