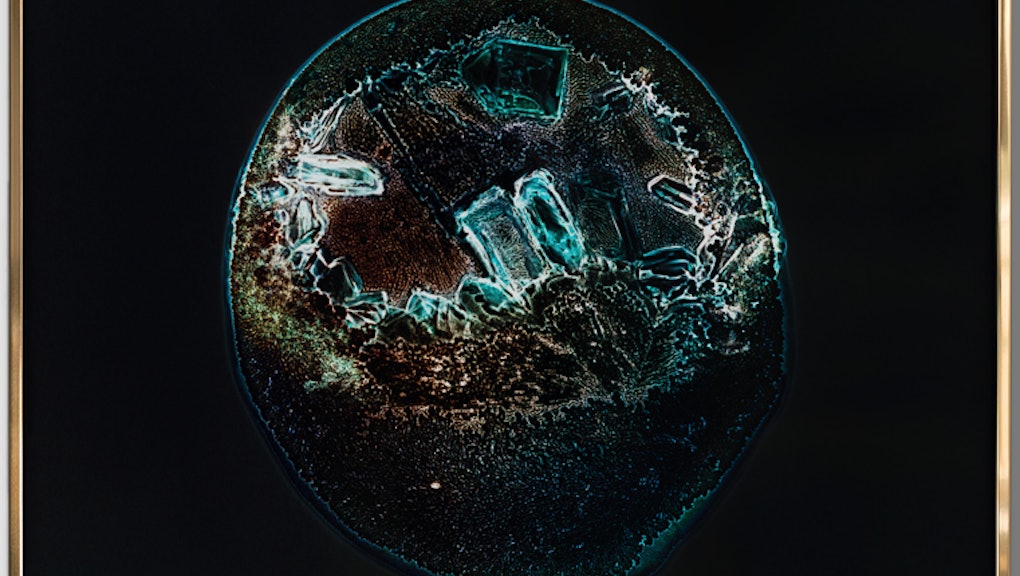 The debate over drugs is often missing real information, and it's led to some bizarre policy choices.

For instance, while the debate over legalizing marijuana is taking center stage, we don't even know much about it. The Drug Enforcement Agency (DEA) lists marijuana as a Schedule I drug — alongside heroin and LSD — which severely limits the biomedical research that can be done.

Many of these substances, from meth to cocaine and ketamine, remain shrouded in the kind of rumor that begins with, "My cousin did Special K once..." But for many of us, that's usually all we hear or know.

In the pictures below, artist Sarah Schoenfeld shows how drugs morph negative photography film, which gives us a sense of how they affect the body on a molecular level.

It's a window into drugs as you've never seen before.

How it affects you: Methamphetamines, or meth, give users a rush of the "feel good" chemical dopamine. Dopamine is a molecule that is released in response to food, sex and things that generally make you happy. In fact, dopamine causes that happy feeling, which is why it's nicknamed the body's "reward system." Meth doesn't supply extra dopamine, but prevents the brain from clearing its natural supply, leading to a build-up of the chemical and an associated "rush."

However, it's not always fun. Excessive dopamine is a hallmark of psychosis. Users can experience hallucinations and paranoia, and an overdose is often indistinguishable from schizophrenia.

What doctors know: Methamphetamines are a derivative of amphetamines, which have medicinal purposes and are regularly prescribed. The slightly less addictive amphetamines work the same way as meth and are used to treat Attention Deficit Disorder, narcolepsy and obesity.

How it affects you: Cocaine works a lot like meth; it also prevents the clearance of dopamine from the brain, leading to an euphoric feeling.

Dopamine also has effects outside of the brain, and these dopamine-enhancing drugs cause a constriction of the blood vessels (often leading to high blood pressure) and rapid and irregular heart rates.

What doctors know: Cocaine is also used medicinally. When applied topically, it blocks the sensation of pain and constricts the blood vessels. As you can imagine, it's a great local anesthetic for minor surgery.

How it affects you: Finally! A drug that doesn't directly mess with dopamine.

Ketamine causes its high by affecting another neurotransmitter, glutamate. Glutamate is one of the most abundant communication tools in the brain, and ketamine happens to "look" a lot like it, chemically. So when a user takes ketamine, the drug interrupts the glutamate signal and causes poor communication between neurons. That dysfunction of the brain is the "K-hole."

Users are unable to really think or react to anything. This disassociated state is why the drug is used recreationally and as a tool for sexual assault.

What doctors know: Ketamine also has huge medical benefits for depression. Existing medications for depression target the serotonin system and take quite a while to be effective. Ketamine, in a lower dose than in recreational use, quickly reverses symptoms of depression through the glutamate system.

How it affects you: Valium is the drug name for a type of benzodiazepine, or benzo. It works by helping out the neurotransmitter that slows down your brain, GABA.

It might sound weird that you have chemicals to slow your thoughts down, but they are totally necessary. Communication in the brain is a balance of excitatory and inhibitory signals; if you didn't have chemicals quieting down some of the communication, you'd be an overstimulated mess and unable to function.

That's the appeal of downers, like valium (and alcohol). You quiet your brain down a little more than normal and stop worrying about background thoughts, like bills or your sucky job.

But benzos slow down everything in the central nervous system, leading to really bad reflexes and reaction times, slurred speech and uncoordinated movement. You might look like an idiot, but you don't care and feel great, which is also why benzos are highly addictive.

How it affects you: Opiates are one of civilization's oldest drugs, and work by decreasing the inhibitory GABA signals that your brain is sending to dopamine-releasing neurons. The upshot: more dopamine and happiness.

Dopamine isn't the only warm and fuzzy neurotransmitter. There are also endorphins. Endorphins are like the comforting mom of your brain. If you are experiencing pain, fear or stress, endorphins are released and make you feel like everything is okay.

Opiates act just like endorphins. So when users take the drug, they get a double-whammy of chemically-induced happiness. Now you totally understand why there were opium dens, right?

The side effects of this drug are mostly constipation and dependence. Of course if you smoke it, you run the risk of lung cancer, and injecting it leaves you susceptible to transmitted diseases.

What doctors know: Opium is used medicinally as a painkiller, cough suppressant and antidiarrheal.

Like marijuana, we don't know that much about LSD. It is a highly restricted drug, and consequently, very little research has been conducted on the substance.

How it affects you: Some scientists think that LSD may affect the neurotransmitter serotonin, which plays a role in mood, appetite, libido and sensory perception. However, it's not agreed upon how serotonin is affected or if other neurotransmitters play a role. LSD is not considered to be addictive.

LSD is also known to cause Synesthesia, which is both cool and terrifying. I'm sure it's interesting to be able to taste circles, or feel orange.

As the National Institute of Health reports, "There have been no properly controlled research studies on the specific effects of these drugs on the human brain." Like marijuana, the medicinal uses, benefits and drawbacks are not clear due to its DEA classification and lack of research.

What doctors know: There is some evidence that LSD could be useful in the treatment of alcoholism, and quite a few great minds have gone on record saying that LSD helped them in their careers.

LSD is a Schedule I controlled substance.

MDMA, a.k.a. ecstasy or molly, is essentially a hallucinogen mixed meth.

How it affects you: MDMA works by increasing dopamine and endorphins, the neurotransmitters associated with happiness. This leaves you feeling great about the world and everyone around you, but MDMA also increases levels of serotonin, which controls your sensory perception and libido. So now everything is wonderful and you want to have sex with it.

What doctors know: MDMA has some perceived benefits for patients suffering from anxiety, depression or Post Traumatic Stress Disorder (PTSD). Long-term use of MDMA has been inconclusively linked to depression, memory loss and confusion. However, because MDMA is ranked among marijuana and LSD as not having any medical value, these topics haven't been fully explored.

MDMA is a Schedule I substance. That's the same designation as marijuana.

What doctors know is often outweighed by what they don't. While many of these drugs have serious effects, they remain shrouded in partial truths because we're rarely allowed to study them in a clinical way. It's past time that we cast off the stereotypes and look at these drugs through the eyes of real science, and not with the fear of previous generations.