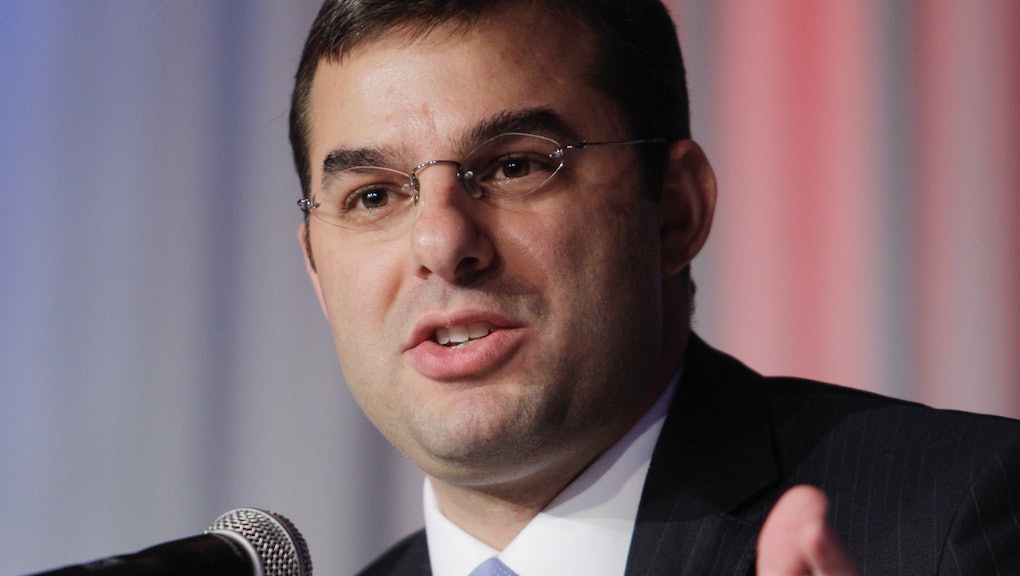 The GOP Isn't Hardcore Enough — So 6 Republicans Are Changing That

The news: The Republican Study Committee is a group of House Republicans organized to advance the cause of political conservatism in Congress. But there's a problem: because anyone can pay the membership fee of $5,000 a month, it's easy to get in and impossible to kick anyone out. That's a big issue for the type of Republican who thinks the party gave up too easily on the October government shutdown and wimped out when it supported Rep. Paul Ryan's (R-Wisc.) December budget compromise.

Increasingly irritated with what he saw as the wimpiness of the Republican Party, Rep. Justin Amash (R-Mich.) quietly launched the House Liberty Caucus last year to compete with the RSC.

Now the HLC has grown from just five or six lawmakers in rushed meetings to a bi-weekly, invite-only luncheon dedicated to the most "hard-core" Tea-Party-favored legislators. It has a membership of around two dozen and according to the National Journal's Tim Alberta is "rapidly becoming an ideological home base for those 'core' House conservatives who say the RSC's swelling membership is diluting its ideological intensity."

Mulvaney thinks that 180 members is too many for the RSC to coordinate into taking effective legislative action. "I think the RSC is going through an existential type of conversation without even realizing it. Is it going to be a conservative debate club? Or is it an activist organization?"

Why you should care about this Republican rebellion: It's relevant if you're a voter who wants to know why, say, emergency unemployment insurance hasn't been extended, or why the government isn't investing in the economy. Instead of passing legislation or coming up with alternative solutions to the president's agenda, House Republicans are busy asking themselves who's conservative enough to get into the tree house.

Amash insists his group isn't designed to compete with the RSC, but rather to provide a space for like-minded representatives to meet and plan their strategy for upcoming legislative battles. But some members are considering leaving the RSC entirely to devote their time and energy to the HLC, and growth and paid staffers are parts of the plan for the future.

So the HLC-RSC split is just one more fault line in the brewing GOP internal civil war, marked by upcoming, sure-to-be-nasty 2014 primary battles that have candidates each trying to out-run the others to the right — at the same time the national party is trying to reassert the power of the traditional establishment wing of the GOP. The result is going to be a resurgence of the GOP's internal power struggles right at the same time Republicans need discipline going into the midterms.

Amash's strict libertarianism and opposition to NSA surveillance have won him enemies like Karl Rove, who described him as the "most liberal Republican in Congress" (completely inaccurate). But even he is facing a difficult primary challenger in the form of Brian Ellis, who hopes to hit him from both the left and the right.

It might be bad: Even the HLC isn't conservative enough for some commentators, who accuse it of being infiltrated by RINOs like Jim Jordan and Raul Labrador. As the Daily Kos put it, they "would like to have just one story come out of Congress that doesn't revolve primarily around some group of House Republicans trying to figure out how to out-conservative everybody else. Just one!"