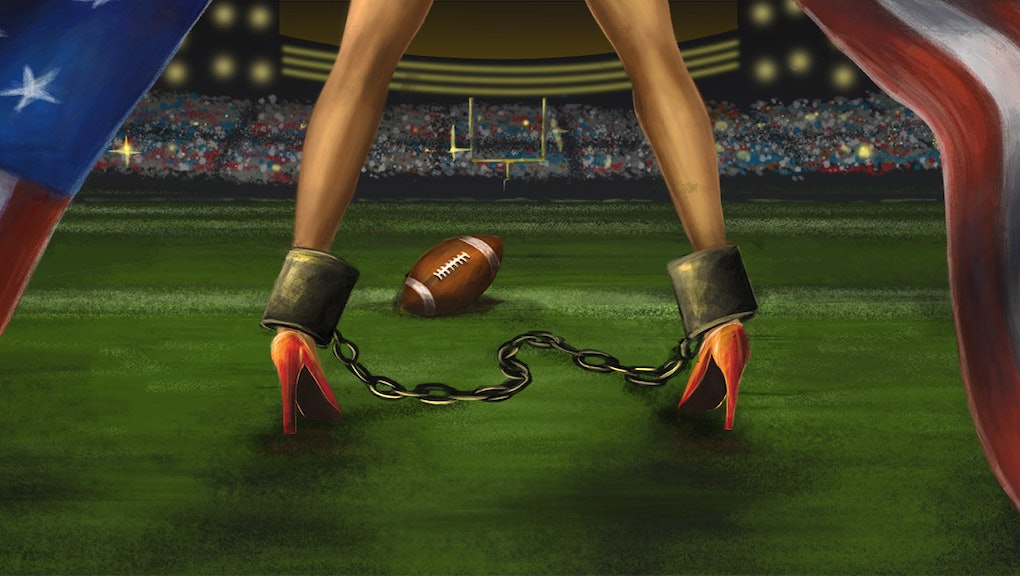 It almost seems like another life, or like it could've, should've, just been a nightmare. But it's very real.

Several years ago, Danielle Douglas, now 31, was trafficked into sex slavery. Her story does not begin with a spring break gone wrong, or in a dusty town in Cambodia, or on a dark, brothel-lined alleyway in Bangkok. It starts in an apartment in Boston.

Douglas was 17 years old in 2000 when she moved from New Jersey to start college at Northeastern University. One night, when she arrived at what she thought was a party, she found nothing of the sort. There was only one man there, who appeared to be in his mid-40s. He claimed to feel badly that there had been a misunderstanding, so he offered her in for dinner. For the next two weeks, they casually kept in touch. "I honestly have no idea how he got my information," she said in an interview. She suspects that he paid off her friends for her phone number.

At the end of that two weeks, everything changed.

"I was hanging out with him, we were going to get something to eat, so I thought, and I ended up in Chinatown where he basically shoved me out of the car and told me to make money for him."

She did not have her phone, purse, identification or anything. "I was pretty much in shock. I saw other girls out there at the time so I kind of understood what he wanted me to do, but I wasn’t interested in doing that. … I went into an alleyway to figure out what I was going to do."

He came around the other side of the alley. "He beat me very badly and threatened my life and told me to make the money or I was going to die. So at that point I just started following directions."

It only got worse from there. She was constantly beaten, and he was always with her unless she was with a john (a client paying for sex.) "I was in so much fear, the only thing in my mind was to not do anything wrong and get killed or hurt."

She was manipulated, intimidated, and forced into submission. "They know everything you do, every minute of the day. [You are] mentally and physically chained."

(A trafficked girl whose pimp forced her to have his name tattooed on her back. ©Tricked Film)

Perhaps one of the most jarring and perplexing types of her abuse was the psychological. The pimp brainwashed Douglas to believe she was worth nothing. "You're so ashamed of what you've done already, and then to be told every minute of every day, 'I'm the only one that’s going to love you now. The only one who is ever gonna love a ho is a pimp … I can take care of you.' And this is drilled into you. Drilled, drilled, drilled. Until you start believing it.'"

She remained under her pimp's intense, overpowering control and manipulation for the miserable two years that followed. The once innocent, bright-eyed girl from Summit, New Jersey never attended Northeastern University.

Later this week, New Jersey will host the Super Bowl, set to be the most expensive ever, with costs expected to reach $70 million. On Sunday, tens of thousands of football fans will make their way to MetLife Stadium in East Rutherford, New Jersey — about 20 miles from Douglas’ hometown — to watch the Broncos and Seahawks go viciously helmet-to-helmet.

Before fans cheer, shout, and drink plenty of beer celebrating the ultimate all-American tradition, they will place their hands on their hearts for Renee Fleming’s national anthem, and sing praise to the United States of America.

But there’s another side to the Super Bowl that most football fans will never see: America's most popular sporting event has also been called out as one of the largest venues for human trafficking in the world.

Exact numbers are in dispute and hard to quantify, but according to the New Jersey Coalition Against Human Trafficking, "The Super Bowl attracts tens of thousands of fans to the host city … But it also attracts a sector of violence, organized criminal activity that operates in plain sight without notice including human trafficking in both the sex and labor industries."

There are several reasons why sex trafficking may increase around a huge event such as this. As hundreds of thousands of people (mainly men) flock to the New York City metro area for the week’s festivities, the primary motivator for increased prostitution is increased demand for it. According to Dorchen Leidholdt, adjunct professor at Columbia University who teaches about violence against women, "The demand for prostitution will drive trafficking. ... It's supply and demand." According to documentary filmmaker Jane Wells, who produced a film on the topic, "There is corporate entertaining, parties, alcohol, corporate-sponsored parties, people away from their families, anonymity. It’s kind of like a perfect storm."

This year could be worse. CBS reported, "Many believe the state's sprawling highway system, proximity to New York City and diverse population make it an attractive base of operations for traffickers."

Wells teamed up with John-Keith Wasson to make the disturbing documentary film "Tricked," inspired by the Super Bowl and sex trafficking, which chronicles "the pimps, the johns, the police, the parents and the victims of the America’s thriving sex trade." Douglas features prominently throughout. The filmmakers set out to show the glaring irony that "Americans are trafficked by Americans to service Americans at the quintessential American event."

Again, the statistics are debated, but here is a snapshot of the startling facts they collected in researching for the film:

- According to the FBI, the average entry age of girls into the sex trafficking industry in America is 12 to 14.

- The average life expectancy of a young girl after being trafficked is seven years.

- According to a comparison between statistics in the American Journal of Epidemiology and The Journal of Occupational Medicine, people in prostitution face a "workplace" homicide rate 51 times higher than the next most dangerous job for women (working in a liquor store).

- According to the Polaris Project, trafficking victims in residential brothels are forced to have sex with an estimated 25 to 48 men daily.

Law enforcement and politicians have been gearing up to address the problem. Mayor Bill de Blasio, members of the NYPD, FBI, and about 12 advocacy organizations recently held a meeting. Professor Leindholdt attended and said in an interview that law enforcement affirmed that trafficking activity is significantly increasing ahead of the game. The NYPD is stepping up its efforts.

But, the added emphasis on policing can only do so much. The laws that regulate the entire industry are completely out of whack. Currently, the arrest rate of a prostituted person to a john is 9:1. In other words, the blame has historically been placed on the prostituted individual, and not on the john, who could — at most — get a year in jail.

(A john who chooses to wear a mask to stay anonymous. Image Credit: ©Tricked Film)

According to Douglas, "When I was in pimp control, they never arrested the john, ever. They almost always arrested me. They would never arrest the pimps either, and the cops would actually speak directly to the pimps, and they would say things like, 'Is she yours? Get her off the track because we’re going to do a sting.'"

Moreover, pimps are master manipulator criminals. They’re well aware of the fact that if they're just standing on the street, they're not actually committing a crime at that moment, whereas the prostitute technically is. It’s called "prostitution enforcement."

Finally, there’s the issue of underreporting. It’s very difficult for victims of sex trafficking to trust the police enough to admit they need help, because they know they could get in trouble.

Unlike many other trafficking victims, Douglas actually managed to escape. About three years later, she found out that her pimp died from a cocaine overdose. "I was definitely relieved. Because I was still constantly looking over my shoulder."

He was never brought to justice.

The Super Bowl is certainly a good entry point for raising awareness on the issue, and educating more people about it is a huge part of the battle. But, as Douglas said, "It's just the beginning."

The Super Bowl is just one day every year, but trafficking could happen every day. Many organizations are working hard with law enforcement to shift the criminal blame away from the prostituted individual and onto the traffickers and buyers. For example, the NYPD's new initiative "Operation Losing Proposition" focuses only on arresting the johns and seizing their assets rather than arresting the prostituted individual.

Today, Douglas is married with two young children. "I love being a mom," she said with a smile. She's told her husband everything about her past, but said, "Having sex is still not normal for me. I was numb for so long that it doesn’t really mean the same thing for me that it would mean for someone else."

She's moved on and taken control, but knows that her past will always be with her.

In the documentary, there is a moment where she said, "I feel sad for that person," then added — as if she was realizing it for the first time — "But that person is me."

Learn about what you can do to prevent trafficking, help victims, and raise awareness here. Tweet me with questions or thoughts @lauradimon.

Editor's note: Due to dispute over certain sex trafficking statistics, this article has been modified from the version published on Jan. 27, 2014 and an edited version on Jan. 28, 2014.