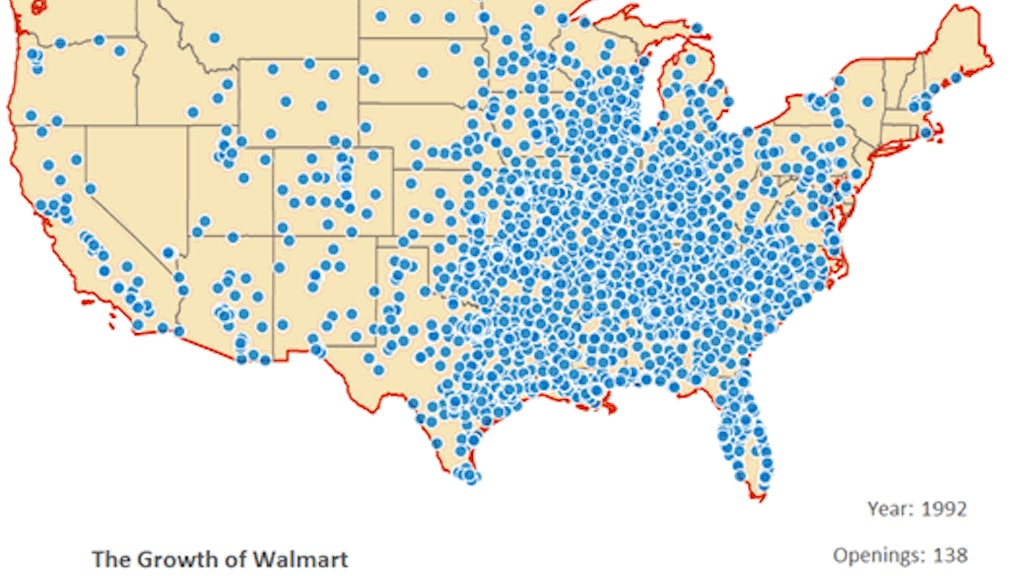 Watch Walmart Spread Across America, In One Mesmerizing GIF

Look at that — it’s mesmerizing.

This GIF shows the spread of Walmart across the United States, from a single store in Arkansas in 1962 to what it is today, enveloping the whole country with its low price guarantee. The retail chain now has more than 8,000 stores worldwide. What's interesting is how long it took Walmart to reach the Northeast. It was almost 30 years before Walmart cracked the region, but once things got going, they really got going.

And as wild as this GIF is, it’s also sort of eerie. Take the label off, and this looks like the slow spread of an epidemic, as all of America becomes infected. Which, I suppose, isn’t so far off from the truth.

Now, we could debate the pros and cons of Walmart all day, and some people do. But the chain is undeniably ubiquitous. It’s become an American staple, the hallmark of commercialism and bargain deals. It’s no surprise that the Walton family is the richest in the world.

Don’t expect the GIF to start reversing itself any time soon, either. Walmart is expecting an uptick in sales growth in 2014, nearing the $500 billion mark as it continues to dominate American retail.

Check out GIF-maker Daniel Ferry’s explanation of how he went about creating this beautiful and terrifying depiction of Walmart’s take over of America.

The more times you watch it, the more you realize how futile it is to resist.