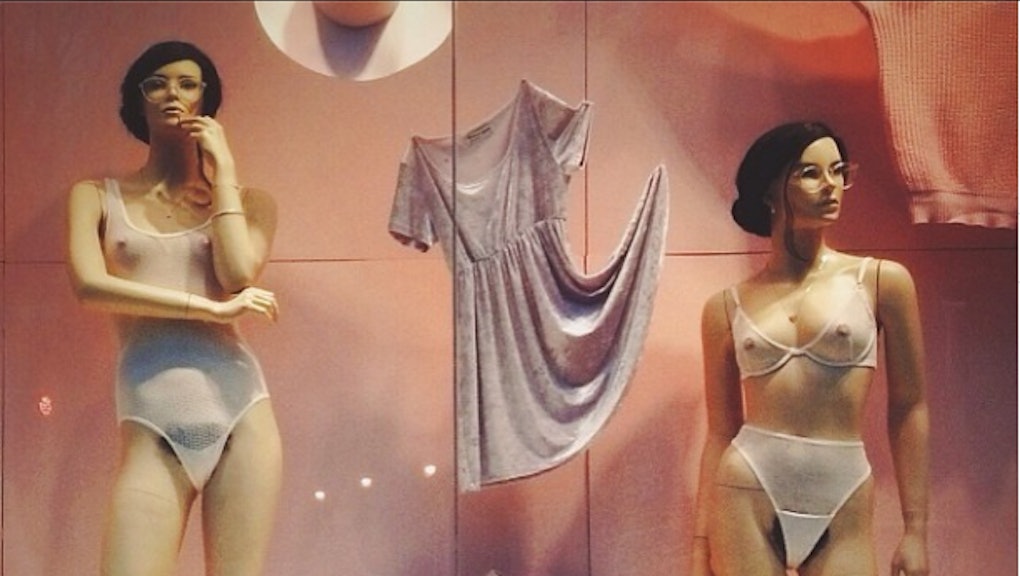 A New York City American Apparel store made headlines this week, when — in perhaps the most American Apparel-like move possible — it unveiled a window display of mannequins sporting merkins underneath the company's signature mesh lingerie.

The mannequins — part of a new Valentine's Day display — were spotted at the American Apparel store on East Houston Street. They also feature visible nipples, because American Apparel is clearly committed to verisimilitude in advertising.

Theoretically, the entire display is meant to promote a more realistic ideal of female beauty. Marketing Director Ryan Holiday told Gothamist, "American Apparel is a company that celebrates natural beauty ... We created [the display] to invite passerby's [sic] to explore the idea of what is 'sexy' and consider their comfort with the natural female form. This is the same idea behind our advertisements which avoid many of the photoshopped and airbrushed standards of the fashion industry."

The display is par for the course for the controversial company, which also recently released a t-shirt emblazoned with a menstruating vagina.

The shirt was designed by Petra Collins, who told Vice, "Menstruation — and also pubic hair — really freaks people out. ... Grown women are taught to repress their postpubescent body or hide it. ... [T]his feminine ideology we have, of the woman being a prepubescent girl, is how we're taught to change our bodies."

There is definitely something to be said for celebrating the natural female body in marketing, and for reducing unwarranted disgust surrounding things like body hair. Then again, American Apparel doesn't exactly have the best track record when it comes to feminist ad campaigns: When it's not crusading against bikini waxes, the company routinely uses models who look almost like borderline jail-bait in highly sexualized poses to sell their products. And putting a fake bush on an impossibly-proportioned plastic doll feels more akin to fetishization than normalization.

If the company really wants to celebrate natural beauty, it might consider using more models and mannequins of different skin tones and with varying degrees of thigh gap every once in a while.