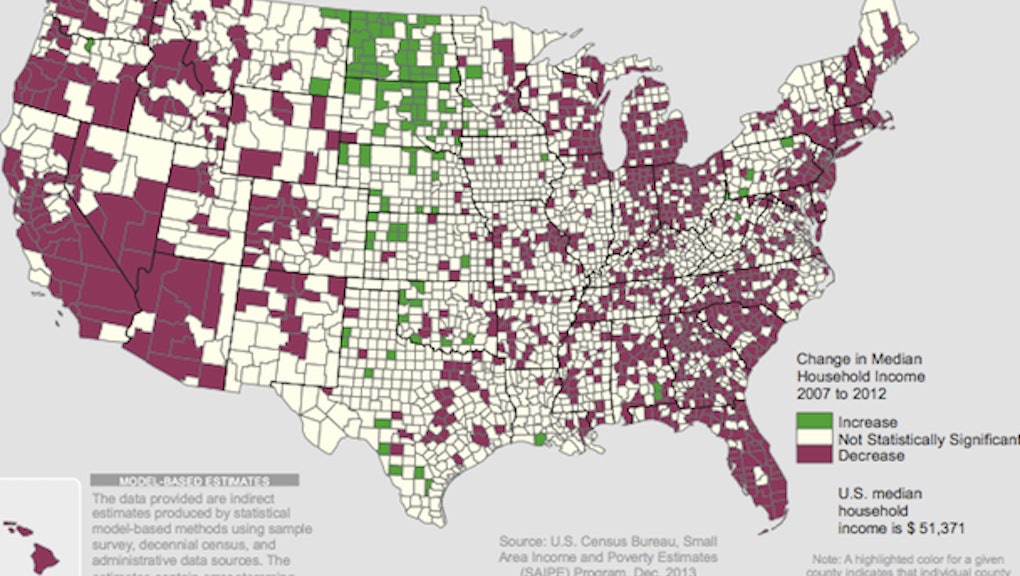 The news: The state gaining the most millionaires doesn't have many fancy skyscrapers, a Sacks Fifth Avenue store or a Tiffany's. It doesn't boast of limousines, world-rated cuisine, or butlers.

What it does have is a lot of mud flaps, pick-up trucks and ... oil.

North Dakota has jumped an astonishing 14 spots in the annual rankings of millionaire households per capita compiled annually by Pheonix Marketing International. Thanks to a state energy boom, particularly in the Bakken shale oil-producing region, North Dakota's economy is booming — and people are getting rich more than ever.

North Dakota is now ranked 29th in millionaires, right ahead of Florida, with 13,494 of its 293,994 households (about 4.59%) passing the seven-figure sign in investable assets. And North Dakota boasts an unemployment rate of just 2.6%. While the rankings don't include the value of real estate, they do provide a valuable insight into where the economy is booming and where it's not doing so well.

The background: About one in every 20 households in the U.S. has $1 million in investable assets, according to Phoenix. This translates to approximately 6.15 million millionaire households.

"I've seen the occasional Bentley," says Kevin Hullet, the Bismark, North Dakota chamber of commerce president. "But mostly, North Dakota is the type of place where someone can be very wealthy and you'd never know it."

The richest part of the country remains the northeast corridor stretching from Boston to Washington, D.C.

Thirty-seven of the U.S.'s richest 75 counties fall in this area.

Domestic energy production has reached the highest levels in over 40 years. By the end of 2016, the U.S. will be producing 9.5 million barrels of oil a day, a peak not reached since 9.6 million barrels a day in 1970.

There's a catch: The prosperity might be short-lived. According to the International Energy Agency (IEA), the supply of shale oil (also known as light tight oil) will peak in the coming decades.

"There is a huge growth in light tight oil, that it will peak around 2020, and then it will plateau," said IEA Executive Director Maria van der Hoeven.

"We expect the Middle East will come back and be a very important producer and exporter of oil, just because there are huge resources of low-cost light oil. Light tight oil is not low-cost oil."

That's consistent with federal estimates by the Energy Department's Energy Information Administration, which cautions that shale oil output will peak in the late 2010s and slow rapidly.

So unless North Dakota invests its oil windfall wisely, it might be riches to rags again in a decade or two.