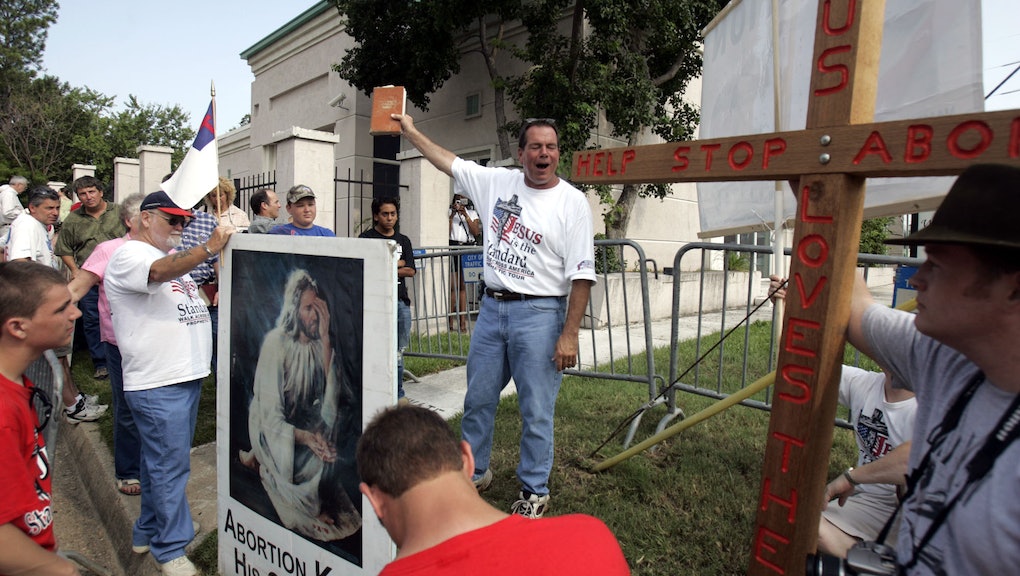 On Wednesday, NPR aired a report about the ongoing Supreme Court debate over buffer zones at abortion clinics. Since the court's 2000 ruling, buffer zones have kept anti-abortion activists at bay — in the case of most states, eight feet away — so that patients and clinic personnel can enter and leave without being harassed. Now the constitutionality of the Massachusetts buffer zone, which is 35 feet, is being challenged.

So NPR's Nina Totenberg decided to file a report from a buffer zone in front of the Boston Planned Parenthood clinic — but apparently forgot to conduct some research beforehand.

In the report, Totenberg interviews people from both sides of the debate, including Planned Parenthood personnel and legal scholars. But the most noteworthy subject by far is Eleanor McCullen, a 77-year-old member of Operation Rescue. The elderly woman, who is the lead plaintiff on the Supreme Court case, has been protesting outside the clinic "every Tuesday and Wednesday for the past 13 years," according to the NPR report.

Totenberg describes McCullen as "the stereotypical cheery grandmother" who simply wants to "walk and talk gently, lovingly, anywhere with anybody." McCullen is presented as a peaceful messenger who just wants the opportunity to talk to women before they make an irrevocable choice. "[J]ust talk a minute before you rush in. You rush in so quickly, and then you come out in tears," McCullen says of her strategy.

Most of McCullen's activity is restricted to these peaceful measures: standing beyond the buffer zone line, speaking to patients and distributing pamphlets. But the point is that the anti-abortion movement is far beyond McCullen or any single person. While McCullen herself may not be engaging in violent tactics, others in Operation Rescue and similar organizations are. To hinge patient safety on one person's innocuousness is simply foolish.

After the piece aired, RH Reality Check editor Erin Matson took to Twitter to blast the coverage, and to offer examples of violent protests that she saw in person at clinics:

She also linked to an article she wrote in 2011 when she witnessed Operation Rescue activists at a Maryland clinic, with a truck with "Dr. Tiller's pictures driving around the immediate area" — referring to Dr. George Tiller, a Kansas abortion provider who was murdered by a radical activist.

In Massachusetts, two clinic personnel were killed in 1994. According to abortion providers there, the 35-foot buffer zone, which has been in place since 2007, is the only thing that gives them peace of mind. "This is the only law that's ever worked to allow law enforcement to maintain public safety at our health centers," said Marty Walz, the CEO of Planned Parenthood League of Massachusetts.

And the Boston facility has seen more than its fair share of gruesome tactics. In its statement to the court, the clinic said that the eight-foot buffer zone, as upheld by the 2000 ruling, was not enough:

"Protesters at the Boston Facility wore Boston Police Department hats and shirts and stationed themselves, carrying clipboards, at the garage entrance. They demanded contact information from people trying to get into the building. These protesters persisted in this intimidating and deceptive conduct despite several arrests. When it rained, 'umbrella wars' erupted, with protesters using umbrellas to 'knock [volunteer patient] escorts out of the way.' Protesters spit at escorts while they were assisting patients to the Facility entrance. The area in front of the pedestrian entrance of the Boston Facility was still a free-for-all."

Once Massachusetts introduced the 35-foot zone through the 2007 Public Safety Act, things got better: "Protests and communication outside the Facilities continue, but no longer at the expense of public safety and Facility access," reads the statement.

But NPR is certainly not the only news outlet that has downplayed, or outright ignored, Operation Rescue's unsavory past and the vital importance of the buffer zone. A New York Times piece also profiled McCullen this week, pointing out that she found the buffer zone to be "intimidating, frustrating and a violation of her First Amendment rights."

It then went on to sample her statement to the court: "I am 5 feet 1 inch tall ... My body type can be described as 'plump.' I am a mother and grandmother."

And clearly, McCullen's grandmotherly stance is working. According to reports, the court was skeptical of the Massachusetts law at the Wednesday hearing. Even Justice Stephen Breyer, who was in the majority for the 2000 Colorado case, questioned whether there should be different restrictions for violent protesters and those who want to have "calm conversations."

It's also important to note that the current court is more conservative than it was in 2000, and that Justices Antonin Scalia, Clarence Thomas and Anthony Kennedy, who dissented on that case, are still on the bench. While the Massachusetts law might be rolled back, there is a good chance that the court might gain enough momentum to repeal the 2000 ruling entirely.

The court is expected to weigh in before June. While McCullen might be a convincingly peaceful plaintiff, it would be a shame if the court gives a free pass to other, more violent, protesters as well.