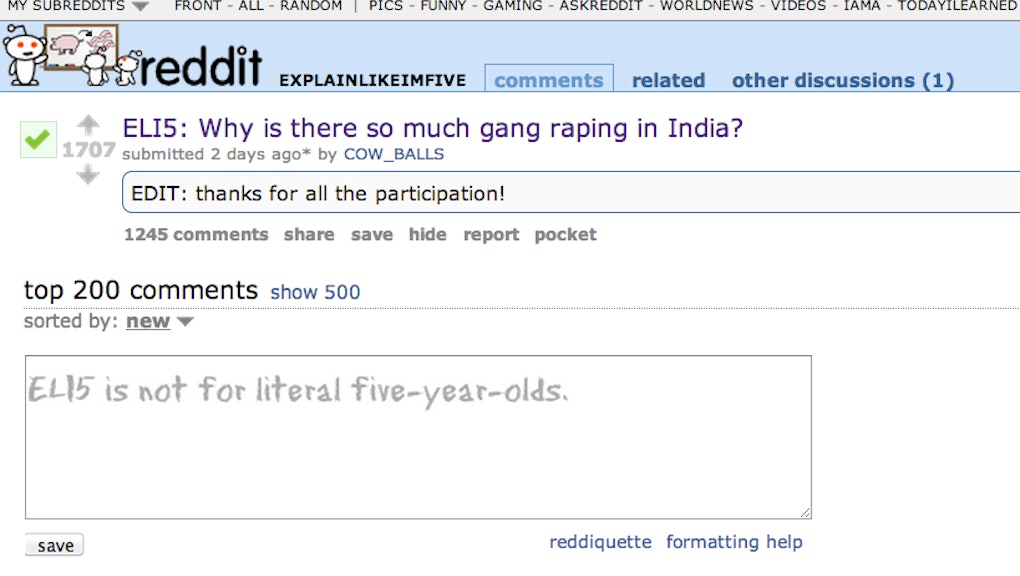 Redditors Get Into a Heated Discussion Over Gang Rape in India

A year after the brutal gang rape of a Delhi student that sparked outrage across both India and the world, a user on Reddit's "Explain Like I'm Five" vertical asked, "Why is there so much gang-raping in India?"

The question sparked much debate as opinions and personal anecdotes flooded in from all parts of the world. People expressed shock and anger with the "rape culture" in India, and deep concern for the Indians who had lived with such abhorrent crime their entire lives.

Some of the strongest themes that emerged in the discussion were blatant sexism, a culture that seems to almost condone rape, sexual repression, the low position of women in Indian society and the ability of rapists to get away with their deeds.

While the conversation is largely positive, most contributors agree that violence against women is unacceptable and that things need to change fast. Change must come from the legislature and Indian society. What stood out was that those giving answers on the forum were largely disconnected with the perpetrators of gang rape.

Yes, there are some brave victims who discuss their own trauma, but Reddit users are not those who can give the real reasons as to what prompts an Indian man to engage in such inhuman behaviour. The people on this thread are most definitely not the ones doing the raping, the ones who believe a woman in a skirt is a slut, that women's bodies are theirs for taking. Nevertheless, the points raised by these users were valid and thought-provoking.

Here are some of the highlights from the discussion (many of the photos are from powerful protests in India after the recent assaults):

1. Rape might happen everywhere, but it's the attitude that matters

The oft-stated argument is that rape happens everywhere — it is simply blown out of proportion in the Indian context. As Nicholas Kristoff argued, "Americans watched the events after the Delhi gang rape with a whiff of condescension at the barbarity there, but domestic violence and sex trafficking remain a vast problem across the United States" — the horrific Steubenville case being a prime example of this.

But it’s the attitude of officials, and of society that is different in India that perpetuates the rape epidemic further. As one user said, government officials tell the offenders that if they marry her, they will not be charged; and women kill themselves after being raped to "preserve their husband's honor." Where else in the world does that happen but India?

One of the most frustrating, regressive parts of Indian culture is the notion that a women is considered property all her life — whether it be at the hands of her parents, who pay huge dowries, or her husband who is legally allowed to rape her.

Women have always been second-class citizens, treated almost like "objects," that millions of Indian men actually do think that they are objects designed for men's pleasure and see nothing wrong with "claiming" their "property."

While this is a phenomenon in many countries besides India, Indian politicians are notorious for backing up this viewpoint with statements like "No man will harass a woman till she looks at him in a suggestive manner." This attitude makes it easier for the common man to use this as a rationale and for rape to become an accepted suffering of the Indian woman.

A user pointed out that rape is often seen as corrective. A woman who is even remotely "Western," wearing pants, drinking, smoking, going out to clubs or bars or associating with males outside of their families, is deemed a whore who must be taught a lesson.

4. A culture of sexual repression

There is a certain irony of the Kama Sutra coming from one of the world’s most sexually repressed cultures.

The structure of Indian society blocks most avenues for men to associate with women, in addition to limiting class mobility for everyone. Sex out of wedlock is generally frowned upon, therefore it is hard to impossible for a bachelor to find someone to have consensual sex with. As a result, especially for less-educated, impoverished youth, rape seems like the only viable option. More often than not, their victim would probably be off-limits to them under socio-economic circumstances or the caste system.

5. Eve-teasing is a harmless cultural norm

Eve teasing, in the subcontinent, is definitely a cultural norm, rather than a cultural taboo that it should be. A euphemism for the public sexual harassment a woman faces while simply walking on the streets, or using public transport, the phrase eve-teasing itself reduces the severity of the crime and the time.

Consider the semantics: Eve teasing refers to the temptress nature of Eve, placing responsibility on the woman as a tease. As a user pointed out, the use of eve-teasing turns "I was sexually assaulted" into "I was sexually appealing and resisted his playful advances."

The two faces of India have been extensively written about — the rich man’s India and the poor man’s. One has a booming economy and westernised culture; technology, servants, drivers, private schools — you name it, they have it. And the other which is completely opposite. This India is the one to which the group of men convicted in the 2012 Delhi gang rape case belong, the India to which most gang rapists and serial rapists belong.

The alternate argument for this, as RSS Chief Mohan Bhagwat claimed, "Villages that embody the spirit of 'Bharat' rather than 'India' and don’t produce a culture of rape. "That’s something that you see in areas in which western culture’s poison has seeped into Indian souls, most notably in urban areas."

Gang rapes as a percentage of all rape cases is far higher in India than most countries. Just last week, a Danish woman was gang-raped by homeless youth as she passed through Delhi’s backpacking district.

Large hordes of male groups are extremely common, and ever more so among the poorer sections. Individuals in these groups of sexually repressed men find that all their friends are of the same mentality and since he probably does not have the courage to rape a woman alone, he gangs up with his friends, as partners in crime.

8. Higher chance of getting away with rape

Of the 706 cases of rape reported in 2012 to the Delhi police, only one ended in a conviction. Shocking government statistics show that a rape is reported every 20 minutes in India but rape laws in India are notoriously weak and victims, afraid of social stigmatization, are reluctant to come forward. Rapists commit atrocities, knowing they have about a 99% chance of getting away with it.

The skewed sex ratio in India, of 917 girls to 1000 boys, is extremely worrisome. Propagated due to centuries of female infanticide, foeticide and customs of dowry, sex selective abortions, though illegal, are a common procedure.

As the youth bulge in India’s demographic matures, men will find themselves in a severe shortage for both sexual partners and wives. This "shortage" will proceed to make living conditions even more dangerous for women.

These may be a few of the reasons why so many stories about brutal rapes in India have made the front page of media outlets, but within these reasons are also the germs of a solution, and that is where the hope lies.