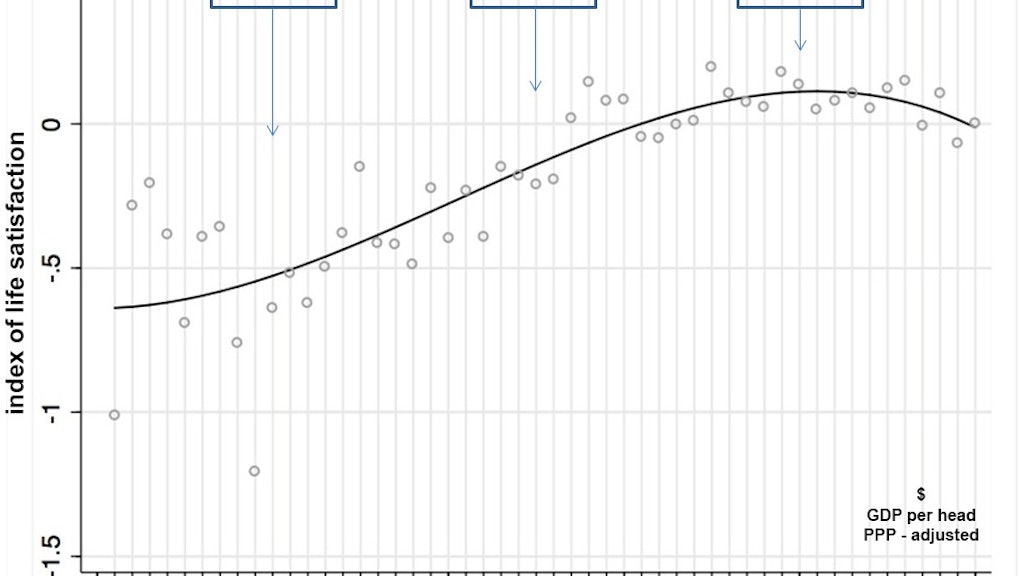 The news: New research has found that the richest countries in the world aren’t necessarily the happiest.

The study, conducted by economists Eugenio Proto and Aldo Rustichini and reported on by the Washington Post’s Max Fischer, found that while life satisfaction in a country rises with average income at first, there is a peak around $33,000 — after which it begins to decline. This means the happiest countries in the world aren’t the richest, but they’re close. Check it out:

This is called the “bliss point” — the point at which happiness peaks. For Proto and Rustichini, that bliss point is around $33,000, but other research has found that there is no peak happiness as it correlates to GDP per capita — meaning that the richer you are, the happier you are, on and on and on. Nearly all research on the subject has found that a small increase in income goes along way for poorer countries. A tiny bump in GDP per capita leads to a large increase in life satisfaction in poorer countries, while the same size increase would lead to a much smaller rise in happiness for richer countries. Which makes sense: a bit of money is going to mean a lot more to a country that doesn't have a lot of it. For a rich country, it's just another drop in the bucket.

Of course, the term bliss point has another use: the point at which a food stops being enjoyable to eat. This is most often applied to junk food, whose manufacturers try to break the bliss point, so people will eat their products nonstop. For them, the bliss point is the "precise amount of sweetness that makes [food] most enjoyable." Indeed, some junk food products don’t have a bliss point, meaning they never stop being pleasurable to eat. That’s why Doritos are so damn addictive.

Unlike the pleasure I get from eating spicy sweet chili Doritos, there is a limit to the amount of happiness that money can bring a country, at least according to Proto and Rustichini. While having higher average incomes certainly raises life satisfaction in a country, there is a point where it stops having an effect, and even begins to decrease happiness. So should we all move to a poorer country? Probably not. While richer countries might not be the happiest, this research doesn’t say anything about the individual. Don’t believe what you’re told: money can buy happiness.