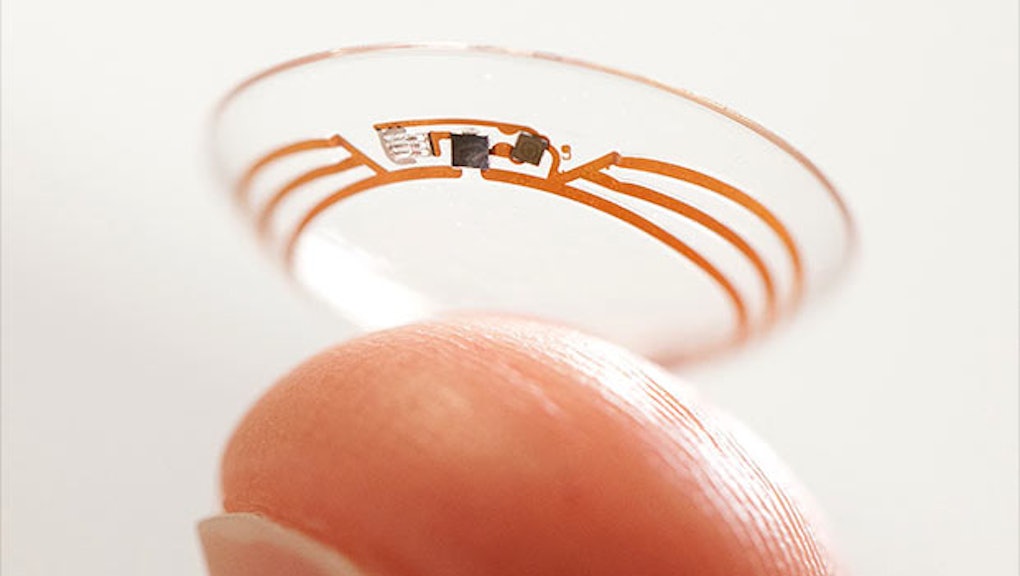 The news: Google Glass is old hat. Try Google contact lenses — and they're not for transmitting your email directly into your corneas.

The tech giant is making smart contact lenses that automatically measure the level of glucose in diabetics' tears. If successful, Google could essentially make the painful process of stabbing oneself with a needle to measure glucose levels obsolete.

Outfitted with tiny wireless chips and glucous sensors, the prototypes fit the electronic components between two lenses. They measure and transmit data up to once per second, and Google intendeds to put LED lights that flash when levels of blood sugar are too high or too low. (Ouch.)

The electronics are so small they appear to be flecks of glitter — smaller than the gold flakes in a bottle of Goldschlager. The antenna is thinner than a human hair. Yet the devices could immeasurably improve the lives of many diabetes patients.

The background: Diabetes affects one in 19 worldwide and a staggering one in 12 in the U.S. Left untreated or unmonitored, the condition can easily be fatal. According to the Washington Post, over 8% of the people in the country have to prick themselves daily to measure blood sugar levels.

"Although some people wear glucose monitors with a glucose sensor embedded under their skin, all people with diabetes must still prick their finger and test drops of blood throughout the day. It’s disruptive, and it’s painful. And as a result, many people with diabetes check their blood glucose less often than they should."

Google says that the lenses are still in the early stage of development, but that it is in discussions with the Food and Drug Administration about how to best move forward with the product.

The lenses are the latest project to emerge from Google's X lab, which is also working on fantastical inventions like self-driving cars and internet balloons.

Here's one of Parviz's earlier prototypes for a single-pixel contact lens display:

The catch: Google did gloss over one pitfall ... the energy source. Wireless power transmission would work (perhaps from Google Glass?), but it's likely diabetics would need to carry some kind of power pack.

Regardless, if Google has anything to say about it, more and more of us will look like cyborgs in the near future.