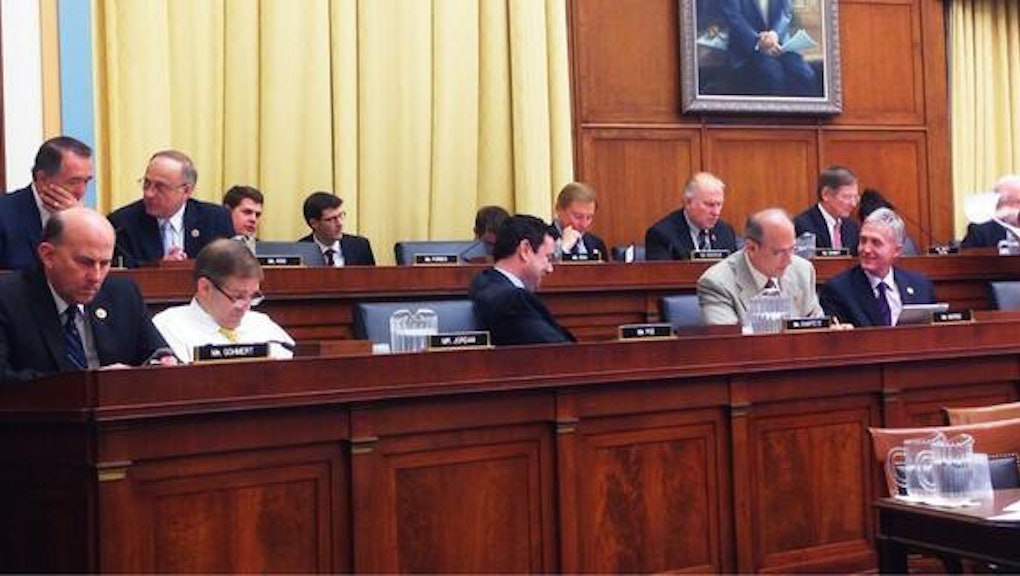 The news: House Republicans want to be double-plus sure that poor women have difficulty getting abortions. To that end, on Wednesday, the House’s Judiciary Committee decided to send H.R. 7, the aptly titled "No Taxpayer Funding for Abortion Act," to the floor of the House.

An all-male subcommittee considered the bill before it was approved according to a party line vote. The Judiciary Committee’s 22 Republicans, all of whom are pasty men, voted for the bill, while the committee’s Democrats, five of whom are women, voted against it.

Just in case you were curious, here’s a little glimpse into what the committee meeting looked like:

The background: But wait, there’s more! H.R. 7 seeks to stop federal funding for abortions through services like Medicaid. However, the federal government hasn’t funded abortions through Medicaid since 1976, thanks to a rider known as the Hyde Amendment. The only exemptions are for cases of rape, incest, or medical emergency, and that’s only since 1992.

Fifteen states have anted up and shelled out to cover abortions for Medicaid recipients, thanks to the federal government’s intransigence. In the other 35 states, poor women are already out of luck.

Of course, Medicaid isn’t the only way in which the federal government might fund abortions. Members of the armed forces and other federal employees cannot receive health insurance coverage for abortion through their jobs. H.R. 7 also makes sure that flexible spending dollars and tax credits for medical procedures will specifically exclude abortion, except in instances where you can document your sexual assault for the IRS. The bill also denies tax benefits to small businesses.

The takeaway: In choosing to prioritize this bill — it’s the first one to be marked up this year — the Judiciary Committee’s Republicans have emphasized their dedication to restricting women’s access to legal abortions in every middling way possible, even when it redoubles existing policy. They’ve also showcased their commitment to making decisions about abortions through all-male subcommittees, actively denying women the ability to comment, and making ridiculous partisan gestures rather than getting essential work done.

Just in case there was any confusion about the committee’s priorities as a partisan organization, which it isn't exactly supposed to be — as Chairman Bob Goodlatte points out, the Judiciary Committee, “is at the forefront of some of the most significant issues facing our nation,” from civil liberties, to immigration reform, to terrorism, to overseeing the Department of Justice and Homeland Security — the committee uses its official Facebook page to repost Fox News videos, and its verified Twitter to retweet things like this:

Maybe the busy committee could spend a little less time posting partisan cable news clips and trying to deal abortion a death of a thousand symbolic cuts, and get back to some of the pressing national security and civil liberty issues that it’s primarily responsible for addressing.

That, or the 113th Congress can spend its second year as it did its first: bickering loudly while getting nothing done.