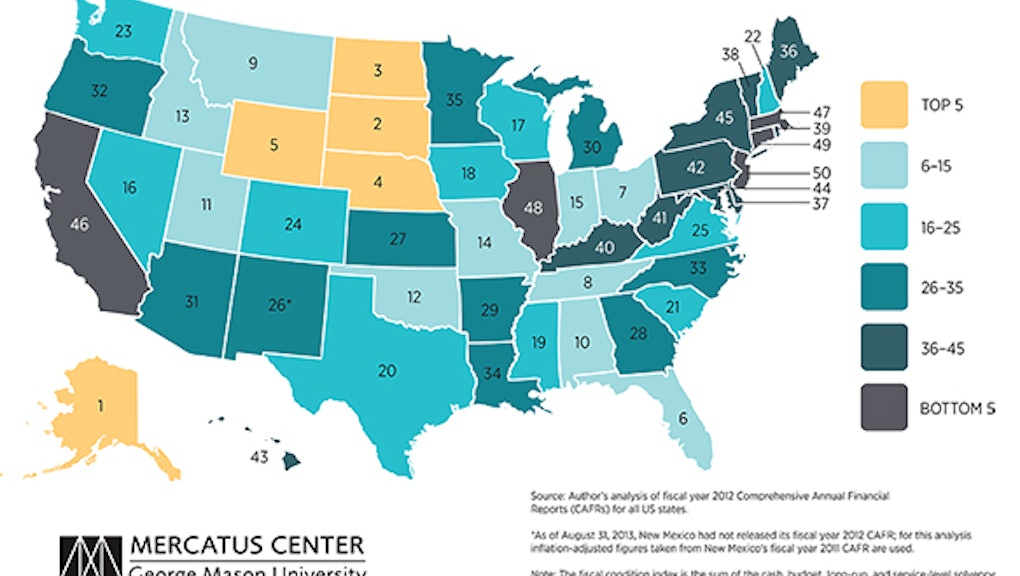 The State in the Worst Fiscal Condition In America is ...

California, Massachusetts, Illinois, and Connecticut rounded out the rest of the bottom five. On the brighter side, Wyoming, Nebraska, North Dakota, South Dakota and Alaska took the top five.

The Garden State was seeing anything but green as it fell last in budget solvency and long-run solvency and was in the bottom 15 in every other category for the 2012 fiscal year. Alaska ranked in the top two in three of the four categories, though it came dead last in service-level solvency.

"I find that the states with the worst fiscal condition have had years of poor financial management across the different dimensions of fiscal condition," wrote the study's author, Dr. Sarah Arnett, an analyst at the Government Accountability Office (although this study was produced outside of her GAO work).

Takeaway: Although the Great Recession's effects are mostly waning, it's still difficult to get a real sense of where different states stand financially. Some factors hit certain states more than others, and some states were clearly able to recover more easily than others. As you can see in the map, states in the middle of the county tended to fare a little bit better than coastal ones, which represent some of the worst fiscal conditions in the country. Although the study was focused more on assessing the situation than solving it, knowing where we stand is half the battle, and hopefully this will give lawmakers and greater sense of the country's actual condition.