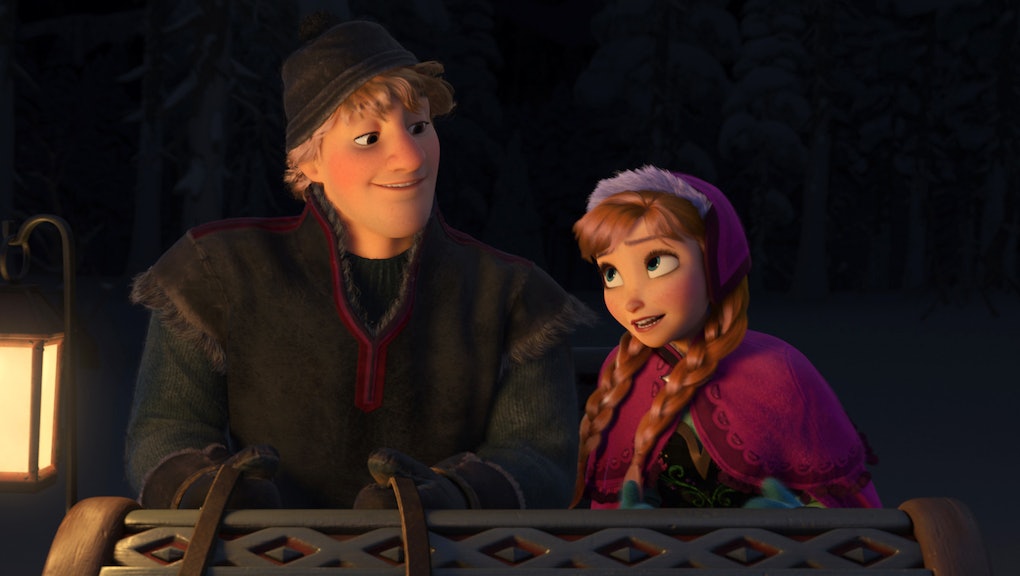 7 Moments That Made 'Frozen' the Most Progressive Disney Movie Ever

Disney's latest movie musical Frozen has been hitting high notes ever since its release over Thanksgiving. In addition to the serious cash the film has raked in, it looks like it's going to bring in a few awards as well. After winning Best Animated Film at the Golden Globes, Frozen is up for the Best Animated Picture Oscar. Its signature song "Let it Go" also earned an Oscar nod. Frozen's monumental success can and should not be understated. The film isn't going anywhere.

Let's check out its most progressive moments:

Let's get the sad one out of the way first. As a young child, Elsa is blessed with cryokinetic powers. After an accident with her sister, Anna, Elsa's parents isolate her, tell her that she's dangerous and demand that she emotionally castrate herself to control her powers, which inevitably leads to her controlling them less. Elsa's parents brutalize her instincts so that even as an adult, she lives in constant fear of herself. Those lessons are so ingrained that she continues hiding even after her parents die.

What Elsa's parents did was abusive, and it is so subtle that most people, including Elsa, don't realize it until much later. Disney takes a much-needed step forward by portraying realistic parental abuse that affects many children today.

When Elsa's power is eventually discovered, she runs away. When she is finally on her own, she finds beauty in herself. Elsa sings the now Oscar-nominated "Let it Go" upon realizing that she is good enough for herself, and that's all that really matters.

In the reprise of "For the First Time in Forever," Elsa proclaims that her freedom and ability to be herself without compromise are more important to her than anything ("Yes I'm alone / but I'm alone and free!"). This is something Disney has never done before as the characters who have been voluntarily solitary have almost always been villains, not heroes. In fact, Elsa was originally intended to be the villain of the story. Luckily, Disney changed its mind. In reality, even when it means isolation, confidence is a worthwhile goal — and it's sexy.

Not to mention that in the line of Disney princesses, there haven't been many, if any, with a sexual inkling or romantic forwardness — ever. Disney has made women who are timid, passive and keep to themselves. Though there have been some small rebels, Anna blows them all out of the water.

She's clumsy, knocks things over all through the castle and runs into horses, which doesn't change over the course of the movie. She's aggressive and forward, tosses a snowball at a 40-foot monster and dives off a cliff. And she's not afraid to call a man "gorgeous" — even if it's awkward.

4. Kristoff's ability to lead next to a strong woman

With all the hubbub about women stealing masculinity from men, Kristoff is a wonderful example of what a masculine, 21st century man looks like. He spends the movie surrounded by strong women, yet he is not intimidated or cowed by them.

He's not afraid to call Anna out on her poor decisions ("You got engaged to someone you just met that day?!") and attempts throughout the film to keep her from making more of them. But he is also willing to admit when she is right and values her sense of adventure and brazenness.

Kristoff represents the kind of modern man that Disney has neglected so far: one who is partners with the women in his life. He is not a competitor, a doormat or a fool. He is an equal, and it makes him a wonderful addition to the ranks of Disney princes.

Hey, did you notice the gay character? I didn't either, until I went to see the film a second time. It turns out that giant man in "Wandering Oaken's Trading Post and Sauna" is probably gay. When he throws in the sauna package for Kristoff, he turns to say "Hello, family!" and BAM! there they are.

The adult in the sauna is clearly implied to be his husband. Best yet, Oaken and his partner have a family — and it's not even a thing. In the few minutes that he's on screen, Disney manages to make a compelling character of Oaken. He is friendly to his customers and generous with his assistance. He's a savvy businessman who understands economics (supply and demand, Kristoff), and he isn't afraid to stand up for himself when Kristoff calls him a crook.

6. Arendelle's unquestioning acceptance of a queen

Disney has produced movie after movie about princesses, but it never once tackles the responsibilities of ruling a kingdom. Why? Because all of the princesses find princes who do the actual governing of the kingdom while the princesses twirl around in their pretty ballgowns, I guess. But Disney takes a giant leap forward here with Frozen.

Not only is Elsa the Queen of Arendelle, but her subjects also accept her rule without question even though she's been locked in the castle since she was a girl. In the world of Frozen, characters don't bat an eye at the idea of a woman ruling them. They love Elsa and Anna, and they bow to their authority in a way unprecedented in Disney films.

I'm sure there's not a better way to say it than this:

Disney riffs on their own trope repeatedly in the movie. Elsa refuses to allow Anna to get married to someone she just met, thus creating an argument that causes the main conflict in the story. When Anna attempts to explain her "true love" to Kristoff, he is completely flabbergasted by her decision.

The beauty of this is that Disney is, essentially, making fun of itself for its poor plot choices. Though it attempted to address the problem in Brave with arranged marriages, in Frozen it finally tackles the painfully problematic trope it has created: getting married to someone you just met — and the notion that all women are supposed to want marriage.

The progressive elements of this film are clearly what has made it so popular and so lauded. Hopefully, seeing that 21st century ideas are here to stay and make for a successful movie, Disney and other franchises will continue to make films with them.