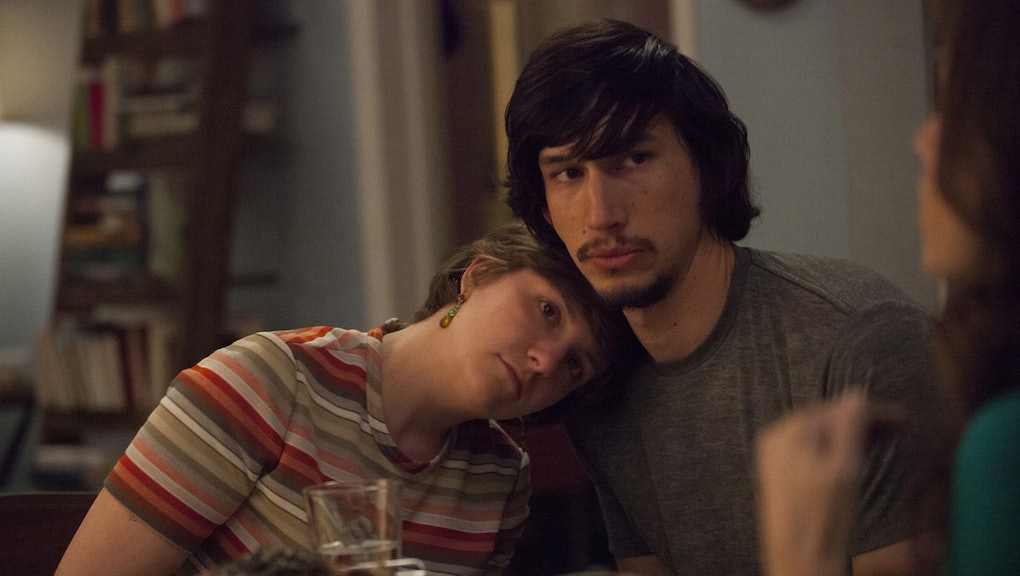 A year ago I wrote about how Lena Dunham was the millennial hell mouth whose baffling success could only be a harbinger of the end of days. But with the recent premiere of the third season of HBO's Girls, it has become clear that Dunham, in all of her unconventional glory, is compulsively watchable.

It's as if the Internet had a feminist groupthink and decided we couldn't be mean to Lena anymore.

Girls is becoming a staple in even the most middle American of homes, and the Internet is amassing volumes of writing analyzing Dunham, and her show. The evolution of her image is dizzyingly hard to track, but it seems the most recent iteration of both Dunham, and her character Hannah, are the most stomachable thus far.

It's hard to tell if the show has actually gotten better, or we all just have television Stockholm syndrome, praising our captor for finally giving us clean underwear (but seriously, it's been refreshing to see Dunham's character dress in things other than dirty rags this season). The show's initial backlash launched a thousand high-brow memes, but more recently it seems there's been a backlash to the backlash. It's as if the Internet had a feminist groupthink and decided we couldn't be mean to Lena anymore (which probably has a lot to do with the negativity surrounding her body image, and that's fair). The result is a forced positivism seeping into newer critiques, reminiscent of high schoolers pretending to be nice after a particularly emotional assembly.

The show has begun taking baby steps to overcome flaws though, the biggest being Dunham's narcissism and the way it influences the shows writing. The show used to be an elaborate ruse: its very title suggested it was about four young women, but most plots only allowed the others to punctuate Hannah's story. This season finally has breathing room for other ensemble members to have story lines that aren't just footnotes.

In this third season the characters seem to even be joining the real world, all having jobs, apartments and things to say that aren't crippled with neuroses.

Almost the entire second episode was devoted to Jessa's stint in rehab, and even supporting characters like Ray and Hannah's editor are getting their own screen time (and the most recent episode's fight between them was actually very funny). All of that praise can't be given directly to Lena though. The shows most compelling episodes are those that Dunham allows others to write and direct. She merely (used sarcastically) co-wrote and starred in last night's episode, and it was the most dynamic of the series.

It's not that the show's focusing more exclusively on one character is a bad thing, but that character must be interesting. That is where Girls got off to a slow start, beginning with Hannah's downfall that managed to go on ad nauseam for a whole season. The second season was more triumphant, allowing the girls to have the strange experiences that are integral to being young in New York other than whining to your friends about life. Granted, most of the added experiences centered on having sex in random locations with questionable partners, but that kind of is the reality of being young in New York. In this third season the characters seem to even be joining the real world, all having jobs, apartments and things to say that aren't crippled with neuroses.

Although Girls is beginning to overcome its freshman failures with a more round ensemble and thoughtful story lines, the biggest downfall still persists: It's downright boring. It is relentless in its endeavor to make something out of nothing, to somehow materialize meaning from the mundane. Highlights from the two episode premiere alone included Hannah scooping ice cream, Marnie cleaning a toilet, Hannah getting her head stuck in the seedy underbelly of a rocking chair and Hannah and Shoshanna singing along to Maroon 5.

It is so boring that each episode has to be punctuated with something so dark and outlandish that it's comical. In the premiere, this was Jessa going down on a freshly outted Danielle Brooks (Taystee from OrangeIs The New Black) in rehab. Last night it was Gabby Hoffman (a grown up Samantha from Now And Then) bursting a glass into her bare hand while naked from the waist down, revealing pubic hair rivaled only by 1970s Playboy models. Some might argue that it's an artful work of contrast that mimics real life. It's much more likely the result of the show not knowing itself yet.

The most contentious criticism of the show is also here to stay: Dunham's unnecessary nudity. Not only is her character naked when it serves no purpose, the other women on the show are almost never nude. When asked recently about the jarring imbalance at a press conference, Dunham was defensive, and Judd Apatow went so far as to call The Wrap's Tim Molloy sexist and misogynistic. During the premiere, the fact that Hannah, waiting for Adam and Shoshana to return from a hike, had to lay down in a way that revealed most of her nether regions, suggests that this wasn't left in the second season, but might become a bit more subdued.

I never thought I would be the person telling you that Girls has gotten better, but it genuinely has. It's a far cry from being a show that deserves the praise and viewership it receives, but it deserves points for taking risks and ultimately learning from its failures. Cheers to you Lena, I even follow you on Instagram now.