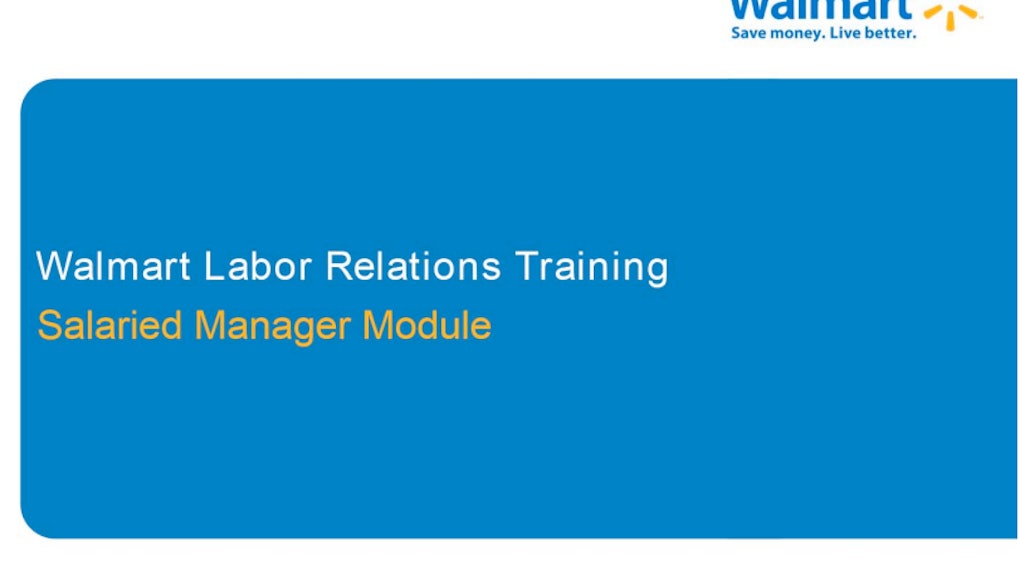 Read the Leaked Documents That Walmart Doesn't Want You to See

On Black Friday 2012, Walmart employees around the country came together to protest low wages and poor working conditions, sparking a bitter war of words between Walmart management and OUR Walmart, a nonprofit organization that advocates for worker's interests. Now the conflict has again been thrust into the spotlight.

Last week, the National Labor Relations Board (NLRB), the independent government entity tasked with enforcing labor law, issued a complaint against Walmart alleging that during these and subsequent protests, Walmart management violated labor law by punishing and threatening to punish employees engaged in protected legal activity. As an NLRB decision is poised to shame and punish Walmart over the alleged abuses, a slew of recently-leaked internal documents showcase Walmart's anti-union tactics.

The NLRB's complaint details potential violations in 13 states, where Walmart illegally fired, disciplined or threatened over 60 of its employees. If the widespread abuses were not evidence enough of a concerted and illegal anti-union strategy at Walmart, the complaint also cites public statements by high corporate officials as among the threats meant to intimidate workers from expressing their rights.

In an interview with CBS ahead of the 2012 protests, Walmart spokesman David Tovar stated, "If associates are scheduled to work on Black Friday, we expect them to show up and to do their job, and if they don't, depending on the circumstances, there could be consequences." Federal law protects workers who are striking over unfair labor practices from just those kinds of "consequences."

If you need more evidence that Walmart's anti-labor tactics go against the letter and the spirit of the law, just look at their leaked internal documents, where they outline tactics that allow managers to both monitor and intimidate pro-union sentiment. For example, although the law prevents Walmart from directly inquiring as to an employee's union activity, one internal memo encourages a managerial tactic known as Coaching By Walking Around (CBWA).

According to the document, "CBWA is when our managers walk through their facility or department everyday just to visit with associates and get a feel for how things are going. CBWA is the largest element of informal communication here at Walmart." Inserted in the middle of an anti-union memo, the real purpose of CBWA can't be hidden by its innocuous diction. It's called spying, folks.

Another internal document (above), "Walmart Labor Relations Training," outlines a managerial policy that punishes any pro-labor speech during the workday while encouraging managers into repeating anti-union talking points. (This document was originally posted online by Occupy Wall Street. Its authenticity was confirmed by Walmart.) Although the document clearly discourages managers from threatening, interrogating, promising or spying on employees, managers are encouraged to have one-on-ones with employees, where they can say things like, "I don't think we need a union at this Walmart or any other Walmart." Disagree? Too bad, actually talking to another employee about forming a union is "solicitation" for non-approved organizations, which is not allowed during work hours.

And while workers are not allowed to communicate with each other about any union activity, Walmart's "open door" policy ensures that any time an employee does want to voice their concerns, he does it alone and face-to-face with a fully-prepped member of management. Even if managers were the most docile creatures in the world, that environment would still be intimidating for most workers during a recession.

Hopefully, the NLRB complaint will settle those tactics once and for all. Walmart has taken full advantage of the NLRB's inability to meet a quorum (Republicans were holding up the president's nominations), cloaking its campaign of intimidation under the auspices of its own "legal thinking."

In the days and weeks leading up to the 2013 protests, Walmart officials read a memorandum to their employees. It stated, "It is very important for you to understand that the company does not agree that these hit-and-run work stoppages are protected, and now that it has done the legal thinking on the subject, it will not excuse them in the future." If all goes well, the NLRB will spare Walmart's lawyers the trouble of having to do any more "legal thinking."