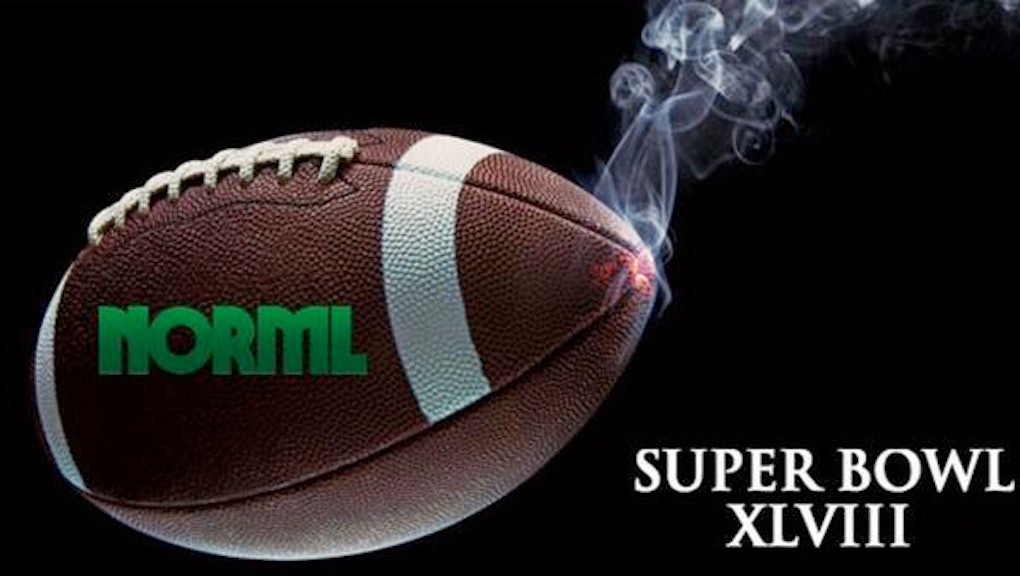 The Seattle Seahawks and the Denver Broncos will be facing each other at Super Bowl XLVII on Sunday, Feb. 2 at the Metlife Stadium in New Jersey.

That's right — the two states first to legalize weed will also be this year's contenders at the U.S.'s most popular sporting event.

Actual news outfits are already referring to the event the "Weed Bowl," "Bud Bowl," "Silver Haze Bowl," "Stoner Bowl" and "The Super Oobie Doobie Bowl." The Seahawks and the Broncos are bound to become a marijuana-legalization flashpoint in what might be the funniest Super Bowl in years. And the Marijiuana Policy Project, among other advocacy groups, is jumping on the opportunity.

"Hopefully there will be a break in the beer commercials for some discussion about marijuana laws," said spokesperson Mason Tvert said to the News Tribue.

In September, the organization purchased this 48-food billboard next to Denver's Sports Authority Field at Mile High:

"If you noticed, the more marijuana-friendly localities really kicked butt," said Steve Fox, who works for a marijuana industry law firm in Denver, to Fox Sports. "I don't know what it really means in the grand scheme of things, but it's a nice bit of karma if nothing else."

Why you should care: For one, good riddance, Patriots.

Meanwhile, according to National Organization for the Reform of Marijuana Laws executive director Allen St. Pierre, "There will be more references to pot going into the Super Bowl week media hype than any previous NFL game in history."

Stoners and reform advocates have been quick to co-opt the NFL's own imagery to promote reform in the two states:

And with the tide of history clearly turning, politicians on the national stage — including President Barack Obama — are jumping on board.

All the hype is making Twitter have a freakin' aneurysm:

The bottom line: Marijuana legalization advocates haven't had this kind of national screentime before — ever. And the Super Bowl will force millions of Americans to pay attention. Will they take it seriously for the first time?