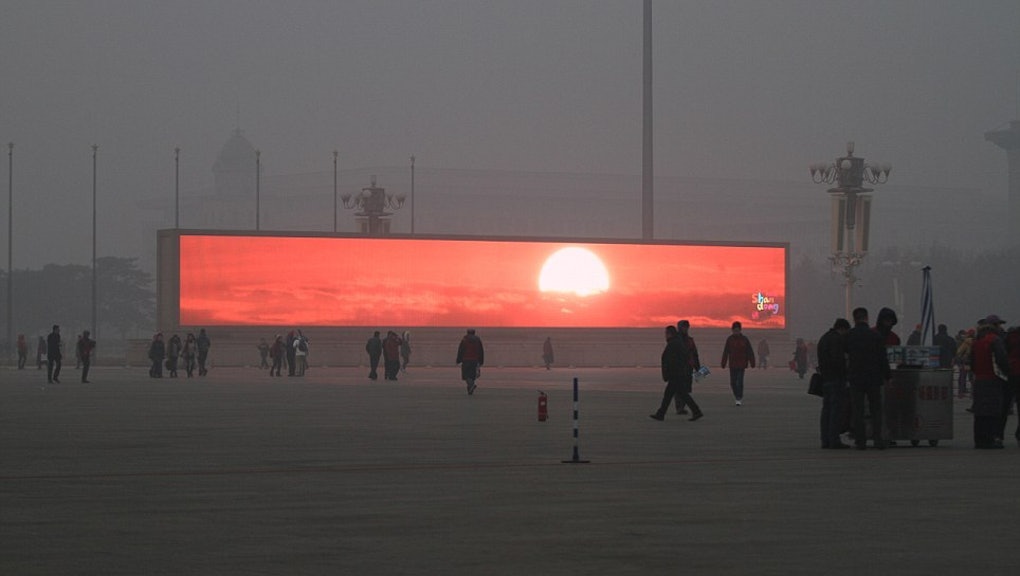 The news: If you read TIME, the Huffington Post, CBS News or the Daily Mail this past weekend, you likely saw this viral photo of Chinese citizens being forced to watch virtual broadcasts of the sunrise in Beijing, thanks to sun-clouding, throat-clogging levels of murky industrial fog.

The Daily Mail ran the story with the photo caption on Friday, which opened with the sentence, "The smog has become so thick in Beijing that the city's natural light-starved masses have begun flocking to huge digital commercial television screens across the city to observe virtual sunrises."

This photo might have you wondering whether Beijing is just barely beating us to that polluted, dystopian near-future — a real-life sci-fi nightmare of smog and industrial poison slowly choking us all to death.

But the whole story is a fake.

The truth: As TechInAsia reports, the smog is real but the fabled publicly-orchestrated virtual sunrise is not.

The sunrise was part of a 24/7, seven-days-a-week ad for tourism in the Shangdong province that runs continuously no matter how much smog is flowing into Beijing that day. This particular animation is less than 10 seconds of the ad; the photographer in question just took a lucky snapshot.

That didn't stop this:

Whoops! Here is a similar Shangdong tourism video. Unsurprisingly for a campaign titled "Friendly Shangdong," it features many sunrises.

Other elements of the original Daily Mail story didn't seem to make sense. The story claimed, "... as the season's first wave of extremely dangerous smog hit — residents donned air masks and left their homes to watch the only place where the sun would hail over the horizon that morning."

But why would Beijing residents willingly risk severe air pollution just to stare at an LED screen? (And why are most of the few residents pictured not paying any attention to the screen?)

Adding insult to injury, the quote from a Chinese traffic coordinator in the Mail's original story was lifted verbatim from an unrelated Associated Press article, apparently without attribution.

Did you fall for this story? I mean, of course, it must be true, right? Because you read it in the Daily Mail:

The bottom line: Pollution in China, especially in major cities bordered by industrial regions, is indeed a horrifying, life-threatening problem for many of the country's 1.3 billion-plus residents. But flocking to giant LED screens just to see the sun? Hardly.