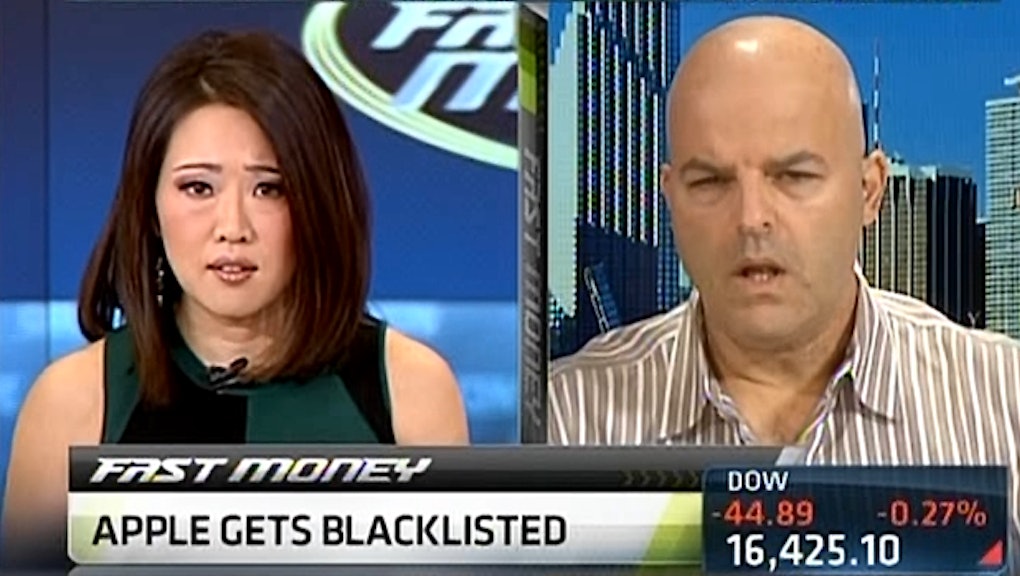 This Analyst Downgraded Apple For a Good Reason, But He's Being Called Crazy Anyway

Financial analyst Ronnie Moas, founder of Standpoint Research, couldn't sleep. His prescription of Lunesta wasn't cutting it. His conscious was troubling him. For the last few years the temperature of his blood had gradually begun to rise. At 1 a.m. on Jan. 6, it reached a boiling point. Moas sat down at this computer and did something unheard of in the financial world; he downgraded the stock of some of the world's wealthiest corporations on moral and ethical grounds.

First up, Apple, which, as Moas noted in a spirited manifesto he posted to his blog that day, treats their workers like animals for "$2 an hour while [Apple has] $150 billion in the bank." Philip Morris, which Moas says "has black lungs and blood of 500,000,000 people on their hands" and Amazon, whose CEO, Jeff Bezos, has made billions on the backs of overworked warehouse staff, joined Apple in Moas' "sell" category.

"There are dozens (if not hundreds) of companies I would like to put on my Blacklist," Moas declared, "but I will start and end it with these three whom [I] decided to single out."

The downgrades have raised more than a few eyebrows in the finance industry. CNBC Fast Money host Melissa Lee suggested that Moas had suffered a mental breakdown. A commentator at the site Hedge Zone labelled Moas' manifesto "an early contender in the category for 'dumbest research note of the year.'"

Perhaps Moas' colleagues find the blacklistings so ridiculous because if we start replacing monetary values with moral values, companies on top of the globe's cutthroat marketplaces would discover their stock worthless as a wheel barrel of Weimar Marks.

Moas, however, insists he isn't calling for socialism. "I understand cruelty goes with the territory under capitalism," he told PolicyMic over the phone this week. "But when you have extreme situations like with Apple, Amazon and Philip Morris, you need to take a stand and stop these people in their tracks."

Moas has hired a publicist and says he's not going to stop until he "blows the lid off this thing."

True, a couple of Standpoint Research accounts have been cancelled, but "that loss has been more than offset by new accounts coming in from people who believe in and support what I'm doing."

Interestingly, the rogue analyst's arguments likely resonate most deeply with those who don't have dough to invest — the 80% of the world's population who survive on $10 a day or less, while 1,426 of their fellow earthlings posses an aggregate net worth of $5.4 trillion.

Moas just might have called the bluff of free market ideologues, who for the past several decades have preached that greed is good and what benefits the wealthiest benefits us all; that a world in which the bottom-line matters above all else can be humane only as long as the profit-lust that fuels it goes unfettered.