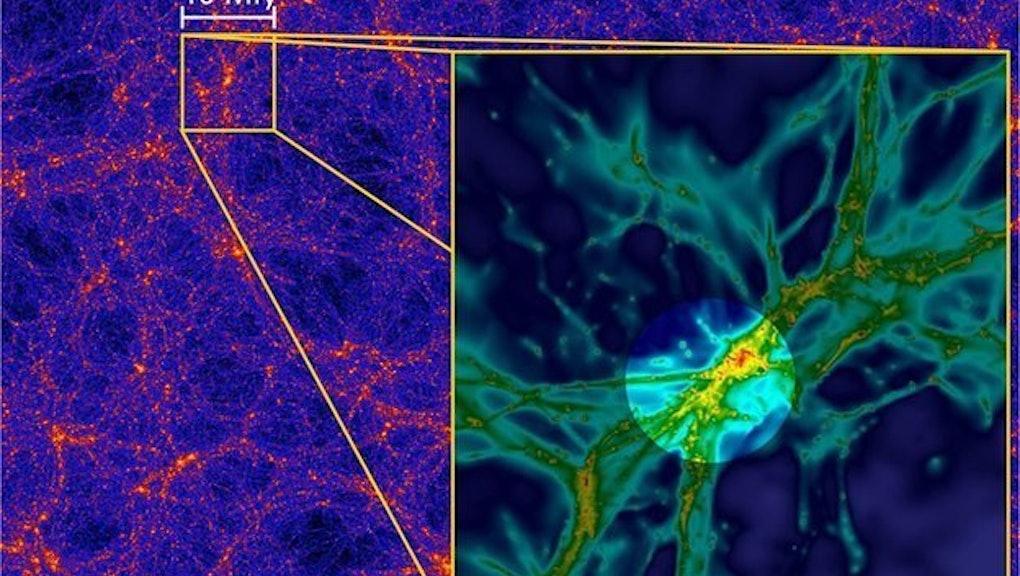 The news: Two hot discoveries are rocking the way astronomers, physicists, and space scientists view the universe — and they're truly something.

The first is intense: Scientist John Bradley from the Lawrence Livermore National Laboratory in California took a microscopic look at the interplanetary dust particles lurking at the edge of Earth's stratosphere. He found minuscule bits of water hidden in the 25 micrometre flakes of dust, which are already half the width of a single human hair. New Scientist explains:

"The dust is mostly made of silicates, which contains oxygen. As it travels through space, it encounters the solar wind. This stream of charged particles including high-energy hydrogen ions is ejected from the sun's atmosphere. When the two collide, hydrogen and oxygen combine to make water."

According to researcher Hope Ishii, who was involved in the study: "The implications are potentially huge. It is a particularly thrilling possibility that this influx of dust on the surfaces of solar system bodies has acted as a continuous rainfall of little reaction vessels containing both the water and organics needed for the eventual origin of life."

The same dust is expected to be found across other solar systems as well.

In other words, the ingredients for life are likely spread throughout the universe, making it that much more possible humanity is not alone.

And in another stunning discovery: cosmologists from the University of California, Santa Cruz, and the Max Planck Institute for Astronomy in Heidelberg might have just viewed dark matter for the first time, as pictured above.

"The cosmic web suggested by the standard model is mainly made up of mysterious 'dark matter.' Invisible in itself, dark matter still exerts gravitational forces on visible light and ordinary matter nearby.

"... Cosmology theory predicts that galaxies are embedded in a cosmic web of "stuff", most of which is dark matter. Astronomers obtained the first direct images of a part of this network, by exploiting the fact that a luminous object called a quasar can act as a natural "cosmic flashlight."

Why is this so important? Their research adds significant credence to the standard model of cosmology, which predicts that as the universe expands and grows, it forms clusters and nodes under the influence of gravity, like a gigantic universe-spanning web. Invisible dark matter still forces gravitational influence on visible light and normal matter nearby.

According to the scientists, glowing hydrogen lit up by the quasar being studied traced out an "underlying filament" of dark matter attracted to it by gravity.

"We now have very precise measurements of the amount of ordinary matter and dark matter in the Universe," said Prof. Alexandre Refregier of the ETH Zurich, who did not contribute to the study.