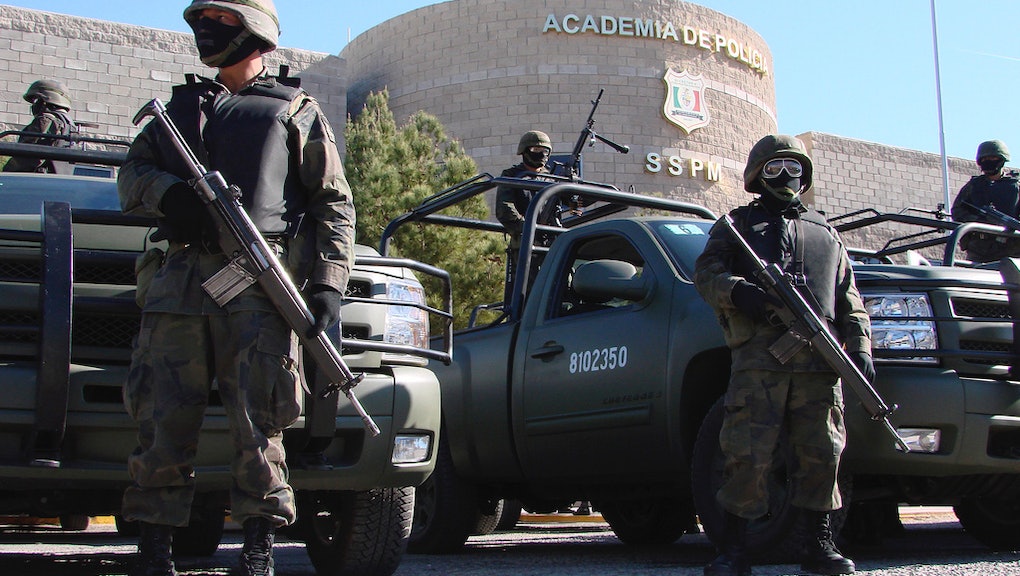 Mexico's government sent federal military troops to the western state of Michoacán last week to squelch the power of armed civilian groups that have taken over several farming towns, asking them to dismantle and turn in their weapons. Government soldiers even killed two vigilantes in the town of Antúnez prior to regaining control of 20 municipalities across the region.

Although both sides are fighting against the same drug gangs, like the Knights Templar Cartel, many peasants are siding with the armed ragtag militias in their struggle for security and peace from transnational violence. When government authorities entered Antúnez, farmers locked arms with vigilantes to block the rest of the two-lane road that spans across the town. And while the Mexican government has successfully managed to neutralize the clout of several self-defense civilian groups in neighboring areas, many are standing their ground.

"We want them to go rescue the towns where the people are still being massacred by organized crime," Michoacán vigilante spokesman Estanislao Beltran told CNNMexico. "When there is peace and security in our state, we will give up our weapons."

The current situation has been years in the making.

The Knights Templar Cartel became known in Michoacán several years ago when gang members constructed a cult-of-personality-like shrine to leader Nazario Moreno González, an infamous drug lord and narcotrafficker who was killed during a two-day-long shootout with military officials.

González, originally a leader within larger regional cartel La Familia Michoacana, took advantage of the local and national government's inability to address the needs of the impoverished and ran extortion, robbery, kidnapping and drug transporting operations while donating significant portions to local residents with the intention of gaining community support. The self-proclaimed liberation theologian, who later became a Jehovah's Witness, shepherded a culture of paternalistic economic custodianship where residents were forced to facilitate duplicitous activities in exchange for food, housing, protection and basic education.

Former President Felipe Calderón of Mexico's right-wing National Action Party served during the height of González's reign in Michoacán, and only made things worse. He launched a strong-arm militarized war on drugs and presided over a national budget that reduced government expenditure on social programs aimed at eliminating poverty. Both actions gave, and continue to give, under President Enrique Peña Nieto's administration, paternalistic drug lords moral leverage in their respective communities, making it easier for themselves to be portrayed as heroes.

For now, vigilantes in Mexico continue to battle the dominance drug cartels have in many regions across the country while struggling against government police forces over security issues. But the unofficial gendarmes also face accusations of upholding a false flag civilian vigilante front aimed at eradicating the Knights Templar Cartel from Michoacán with the intention of ushering in a rival cartel's ascendancy.

Although it is crucial to examine the credibility and operational function of vigilante groups in Mexico, they should not be outright treated as the equivalents of drug cartel gangs. They are experiencing popularity in regions of the country, like Michoacán, because the national government has failed to address issues associated with poverty, and has instead financed perpetual militarization campaigns that only fuel the ongoing drug wars.