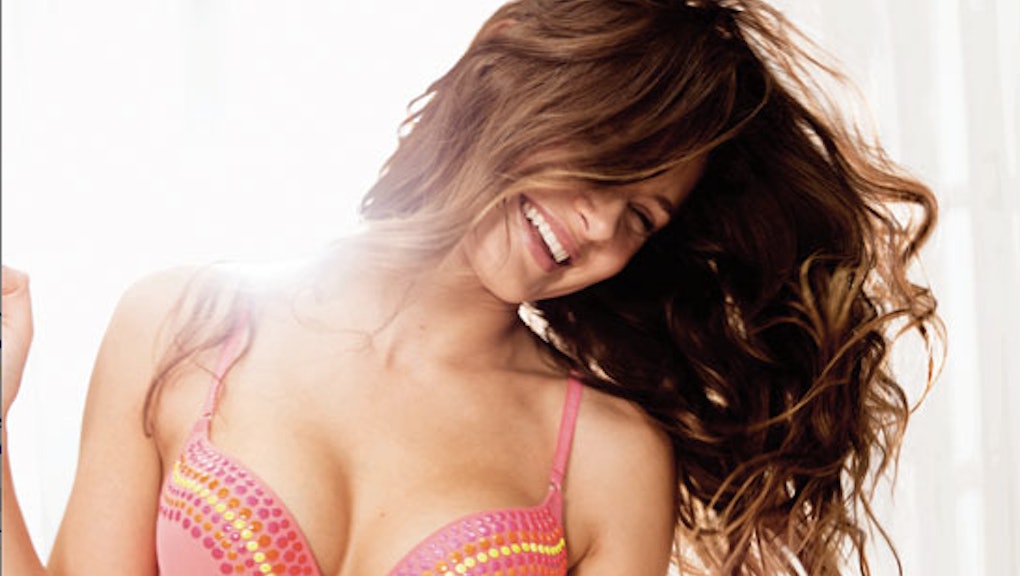 American Eagle Won't Photoshop Models. But This Isn't "What Girls Really Look Like."

As part of a marketing campaign for its newest lingerie, American Eagle Outfitters recently announced that its Aerie Real line will feature both unretouched photography and models with breast sizes representing its scant bra range in a feel-good attempt to show its target customers, aged 15 to 25, "what girls their age really look like," according to company representative Jenny Altman.

That should be heartening news.

Unfortunately, the resulting marketing campaign — while a tiny shuffle in the right direction — represents meager progress at best. At worst, it's a calculated attempt to use the idea of body positivity for the sole purpose of selling teal and pink panties printed with the phrases "spring breaker" and "true love."

To be fair, photos from the American Eagle campaign, which can be seen above, do seem slightly less airbrushed than the majority of their retail-ad counterparts: Models' stomachs have depth and their skin has texture. Necks and abdomens haven't been hollowed out, thus leaving Jezebel to focus its Photoshop witch hunts elsewhere. But that's it. While American Eagle Chief Merchandising Officer Jennifer Foyle claims that the company designed the campaign for "young women of all shapes and sizes," it has done no such thing. Unless, since the last time I checked, all women are within a single-digit dress size or two of one another.

And therein lies the problem. All that American Eagle has managed to do is replace one archetype — the skinny-but-buxom Victoria's Secret runway model — with another — the thin but approachable young woman with "imperfections" such as an individual mole or a small cursive tattoo.

After all, according to Altman, "We left everything. We left beauty marks, we left tattoos, what you see is what you get." Yep. That, in American Eagle's view, constitutes "everything."

The company could have been courageous, and could have gone all out. They could have truly, in their own words, "broken the mold," and committed to featuring the full range of young women you're likely to see walking across a high school hallway, university quad or city street: large women, short women, tall women, transwomen, hirsute women, women with acne and vitiligo, women with disabilities, women with different-sized breasts, women who are pregnant or have recently given birth and so on. They could have abandoned detrimental talk about "imperfections," or what constitutes "real" when it comes to curves. At the very least, American Eagle could have included women who come in the same sizes as the clothing they sell; their range, after all, goes up to XXL. They could even have included just one woman with short hair.

Instead, the retailer opted to simply replace "supermodels" with mere models. Hooray, I guess. That's certainly better than nothing, but also fairly close to it.

Dove and Pantene and American Eagle are welcome to keep pandering to young women through individual ad campaigns like the one above, even if they look increasingly cynical for doing so. Meanwhile, I'll be over here shopping at stores that actually carry my bra size and underwear that aren't pink, and hoping that if I'm ever featured on the cover of a magazine, the Photoshop wizardry looks a little less Annie Liebovitz, and a little more like this: