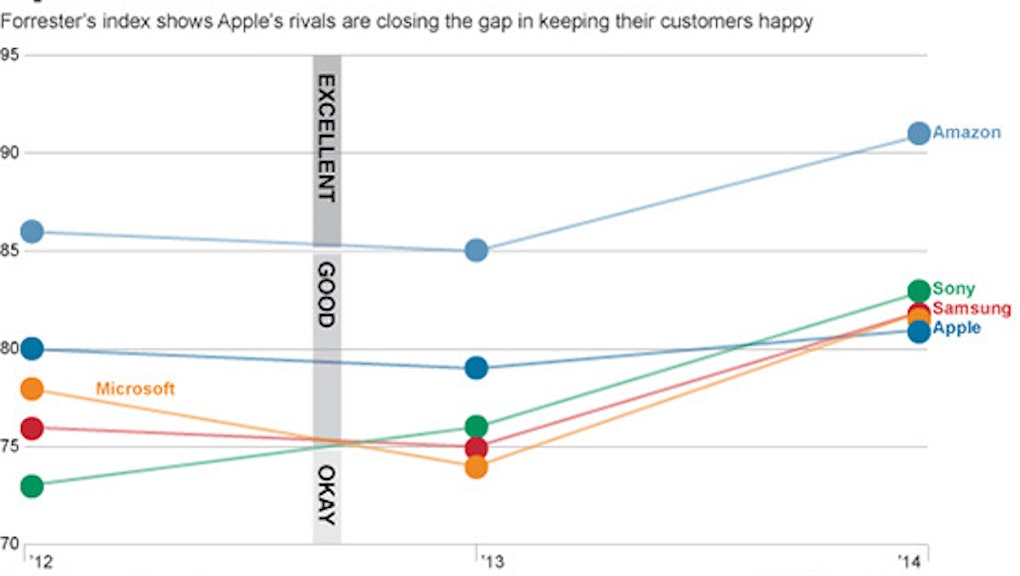 A New Tech Survey Has Been Released. Guess Where Apple Ranks On Consumer Satisfaction :-(

The news: Those Mac stores might not be giving you the vaunted customer service Apple prides itself on, according to a 2014 customer experience survey from Forrester Research.

In fact, Samsung, Sony, Microsoft, and Amazon are all better consumer-electronics retailers to deal with — the first year Apple was beaten by any of the first three companies, and a particularly weak showing in an increasingly competitive market.

See the survey below:

According to Forrester's, though, pretty much every major mobile / electronics manufacturer covered in the chart improved their customer service rating — including Apple. The only problem is that Apple did it by just two points, increasing from 79 to 81, while its competitors raised the roof by over five points each. Samsung and Microsoft both went from "okay" to "good" rankings in the space of just one year.

1. How enjoyable were they to do business with?

2. How easy were they to do business with?

3. How effective were they at meeting your needs?

Amazon was the only manufacturer among the 17 consumer-electronics firms in the rankings to get an "Excellent" ranking. While Sony came in at 83, Microsoft and Samsung trailed by one meager point at 82.

This isn't a serious problem for Apple, who might just need to refine their touch. But it falls short of their customers' expectations.

Why is Apple slipping? Macrumors.com blames a continually increasing volume of customers going to their retail outlets, including a short-lived tenure by former retail head John Browett. Browett cut back staff and emphasized profits, to the detriment of the customer experience.

But realistically, Apple's one-point switch indicates nothing has really changed for the better or the worse on the customer service front, and rather that its competition is ranking up its game. Or, for the skeptics out there, it might be that these rankings are a little less important than Forrester's would have you think and should be taken with a little salt.