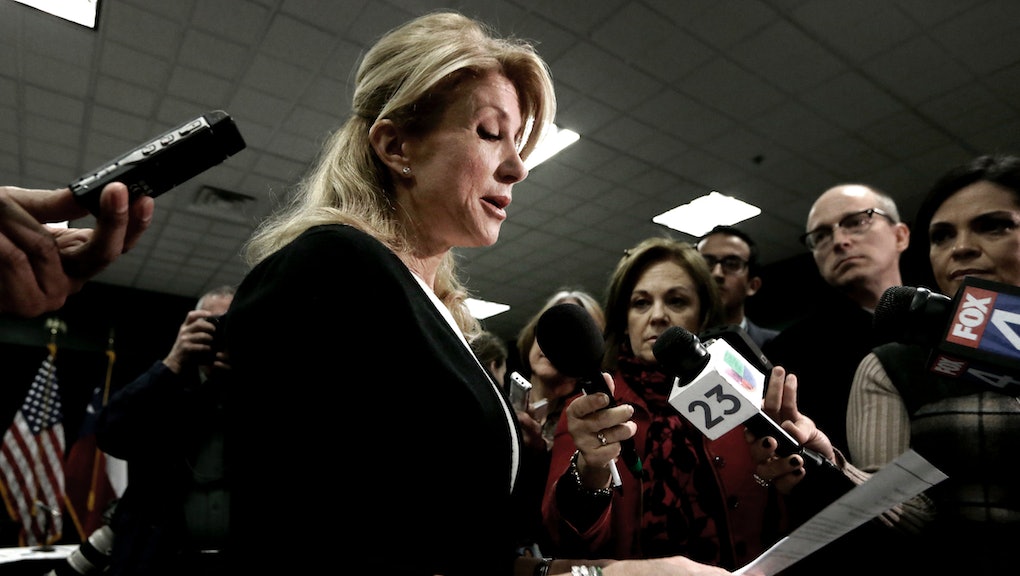 Since her famous 11-hour filibuster last summer, Texas State Sen. Wendy Davis has become something of a rising star in the Democratic Party and American national politics. But as she's been eyeing a Texas gubernatorial run, some details about her past have emerged that have rubbed some people the wrong way.

After her life story was aggressively circulated in several publications and outlets, a recent interview originally published in the Dallas News indicates that some of the facts might be off. Some of the basic inconsistencies include the fact that Davis was 21, not 19, when she was divorced; that she lived in a mobile home for less time than originally reported; and that her second husband, a lawyer 13 years her senior, helped pay for her education. There are a few other blurry details in the Dallas News story, but these are the main points conservatives seem to be attacking.

"This Wendy Davis out of Texas is a genuine head case," said conservative talk show host Rush Limbaugh in an epically enraged rant on Monday. "But the problem is she's a leftist and therefore there is the fraud and deceit woven through her life story, which it has been discovered now has some issues."

(I'd like to point out that saying someone is a leftist therefore she is lying might not be the best way to start an argument.)

If you feel like wasting five minutes of your time, you can listen to Limbaugh's rant, but the highlights speaks for themselves. Conservative blogs like RedState have also taken to attacking Davis and her "lies," but very little of it makes much sense.

One might argue that the fact that Davis' story — a considerable centerpiece of her campaign thus far — turned out to have some inconsistencies should be a major problem, but it would be a weak argument. Especially since the inconsistencies are minimal and the overall themes of her story, the ones on which she is campaigning, hold true. The real problem the Right has with Davis is that she's a woman and she's threatening to take Texas.

"The fact that Davis isn't a male candidate is the only reason anyone considers it news and Republicans try to paint it as a scandal," Democratic strategist Harold Cook told NPR, adding that he believes these actions by the Right demonstrate deep sexism.

"If this were a story about a male candidate who became a father early, whose wife helped him through law school and took care of the children while he was in school — well, that's not news, is it? It's not news, and it's not a scandal."

And Cook is completely right. If Davis were a man, this would be a simple story of misunderstanding that eventually reveals itself to be a tale of a hardworking guy pulling himself up by his bootstraps and doing what needed to be done to provide a future for his family.

Soon after, Davis took to Twitter to defend herself. First with:

Some conservatives have said that Davis is not a true feminist, but just capitalizing on feminist sympathies to win election. Maybe they have a point, because if anyone knows anything about women, it's cranky old white guys. I mean, "Abortion Barbie," are you fucking kidding me?

"It seems, when you boil it all down, that Wendy Davis would have ended up being really poor and destitute were it not for a man." Nice one, Limbaugh.