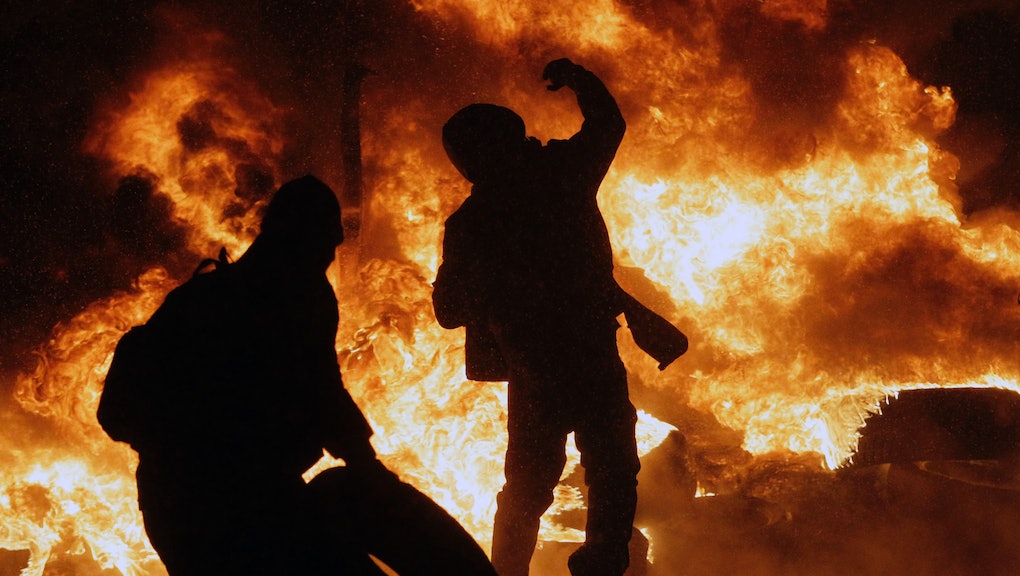 "You Are Registered As a Participant in a Mass Disturbance." Kiev Police Send Insane Mass Text.

The news: Late Tuesday night, cell phones across Kiev chirped and buzzed with the same piece of disturbing news.

Apparently, the embattled government of Ukraine decided to send out a mass text message reading, “Dear subscriber, you are registered as a participant in a mass disturbance” to people throughout the city, and did so based only on individuals’ (or, really, their cell phones’) physical proximity to the protests taking place in and near Maidan Square.

The troubling act on behalf of the Ukrainian government signals its intent to enforce the draconian new anti-protest laws, including a prohibition against participating in "mass disturbances," that it passed last Friday. It also shows that while mobile phones and apps have been widely touted indispensable tools for protesters and activists worldwide, they may also be a source of vulnerability for demonstrators, thanks to specialty equipment that’s sold both to federal governments and local police departments around the world.

Why is everyone protesting? Ukraine’s weeks-long Euromaidan protests, which began in November in response to President Viktor Yanukovych’s decision to back away from an EU deal, were reignited over the weekend after the Ukranian government passed stringent new laws curbing citizens’ rights of speech and association. The new rules forbid protesters from protecting themselves with helmets and face masks, ban the erection of tents and barricades, and create stringent new libel restrictions. Penalties for the new crimes range from 15 days’ detention to a year’s hard labor to 15 years in prison.

In response to the new rules, up to a million protesters took to the streets in renewed demonstrations that turned violent on Sunday, when a minority of protesters began throwing firebombs and cobblestones and burned a police van to the ground. While Yanukovych has pledged to meet with protesters and opposition leaders in an attempt to curb the crisis, the president turned opposition candidate Vitali Klitschko away on Wednesday — the same day that the protests’ first death was reported.

The takeaway: The government’s threatening mass text message — “participating in a mass disturbance” now carries a 10- to 15-year penalty — went out to anyone with a cell phone who was located in or near Maidan Square, regardless of their participation in the demonstrations. In addition to broadcasting the text, the Ukrainian government may also have been able to record the phone numbers to which it went, in what might be considered an electronic form of kettling.

How did they do it? Despite the text’s reference to “subscribers,” Ukraine’s three largest cell carriers deny working with the government or giving it access to their cell tower data, and they may well be telling the truth. According to an article on Mashable, a device called an International Mobile Subscriber Number catcher, or IMSI catcher, can be set up as a fake cell tower in order to intercept the mobile phone signals within its range. The devices are relatively affordable, and according Ars Technica, IMSI catchers have become increasingly available to law enforcement departments since 2001, particularly in the United States.

For all the hype surrounding the role of Twitter in Tunisa’s recent revolution, or Facebook’s importance to the demonstrators in Cairo’s Tahrir Square, it’s important to remember that mobile devices, and the social media applications running on them, can be shut down by government forces, used to track and arrest protesters, and to broadcast messages of intimidation to a wide swath of people, as also happened in Syria. Unfortunately, the proliferation of mobile devices, and their ability to keep connected, cuts both ways. We can only hope that Tuesday’s mass text represents mere bluster on the part of the Ukrainian government, and isn’t a harbinger of either further escalation or widespread arrests.