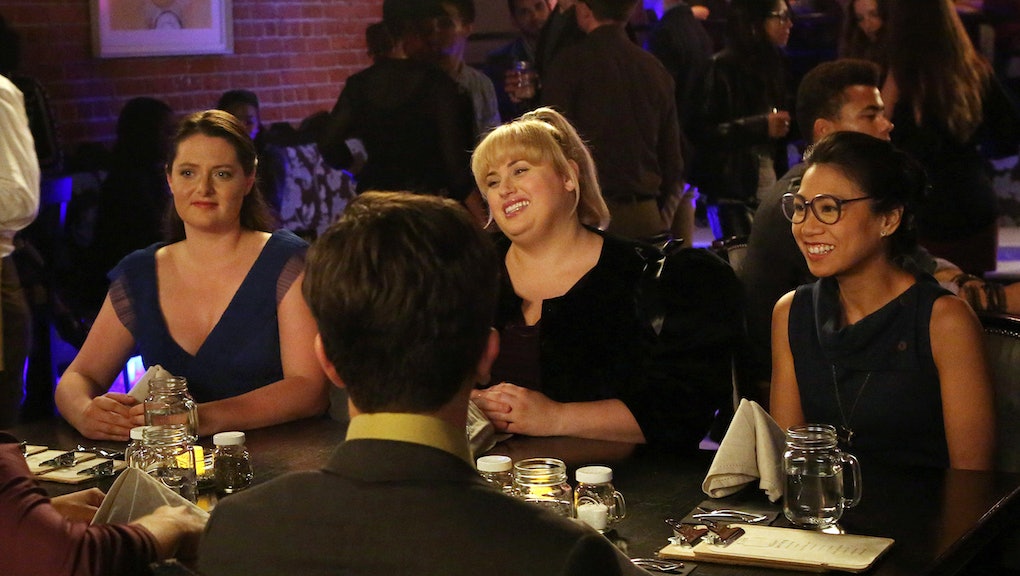 ABC's Super Fun Night isn't packing the punch everyone expected, but no one seems to want to say why. Critics blame the writers for SNF's weak and repetitive jokes, and a proposed storyline that doesn't match with what the show really is. But while the writer's room plays a part, the real culprit is the industry: Hollywood finally buckled and answered America's demands for diversification of body images on television, but it's become abundantly clear that after the green light, Hollywood has no idea what to do with a larger woman on screen.

In theory, Super Fun Night follows three oddball roommates as they try and break out from their reputation as shut-in "losers," and start having "super fun nights." In practice, Wilson's roommates are really just caricatures that only pop in to get made fun of. Helen-Alice (Liza Lapira), a nervous Asian bookworm, and Marika (Lauren Ash), a masculine Russian oaf, make it clear that the show never had any intention of breaking away from stereotypes.

Kimmie is clearly the bastard love child of too many male executives in Hollywood boardrooms.

But the star of the show is Wilson. When Wilson became famous stateside with megahits like Bridesmaids, What To Expect When You're Expecting and Pitch Perfect, not only was the viewing public asking for more of her, but for once Hollywood was allowing a bigger girl to be a star without making a big deal of it.

In the original pilot, the show was meant to center on a love triangle between the dopey Kimmie (Wilson), the British Richard (Kevin Bishop) and the well-off Kendall (Kate Jenkinson). The initial set-up had intrigue, with Kimmie vying after Richard, who underneath his British aristocracy secretly likes heavyset women, and is just as much of a dork as her. Unfortunately, that version of the pilot, written by Wilson herself, never aired.

After poor reception from test viewers, ABC yanked Wilson's pilot, and aired the show's second episode instead. With the network apparently unable to handle a larger woman who gets the guy, the Kimmie who ended up airing was hopeless and hapless, lusting after Richard as he sent mixed signals and ultimately rejected her for Kendall. This set up the dynamic for the rest of the season, with a defeated Kimmie having to endure a playful friendship with Richard, while he carries on an office romance with the comically malicious (in a "it's so unrealistic, it's funny" way) Kendall.

Wilson intended for the show to be both fresher and smarter than anything it has become. Her brand of comedy is unique and intriguing, with characters like Pitch Perfect's Fat Amy, who was genuinely sexy, witty and unafraid, all the while still being able to keep things funny. Kimmie, on the other hand, is clearly the bastard love child of too many male executives in Hollywood boardrooms, and the gullible nervousness of networks that pander to ratings and polls. The version we get of Kimmie is always the butt — really, the boob — of the joke. She is unrelentingly nice in the face of real bullying, and orders a pizza at every turn. And her natural beauty is obviously downplayed via ill-fitting costuming and dumpy hair and makeup.

If the show gets picked up again, we'll see if its ill reception can persuade ABC to give Wilson back the reins of her show. In the meantime, it's disheartening to see that Hollywood executives still can't accept a bigger woman who doesn't get left crying. They can't seem to wrap their heads around her being the center of her friend group, either. Worst of all, they perpetuate an idea that she's dumb and bad at her job. Stars like Wilson aside, Hollywood is still the biggest fattist around.

Correction Jan. 28, 2014: An earlier version of this article stated that a new pilot had been written and aired in lieu of the original. It was in fact the second episode of the series that aired in place of the pilot.