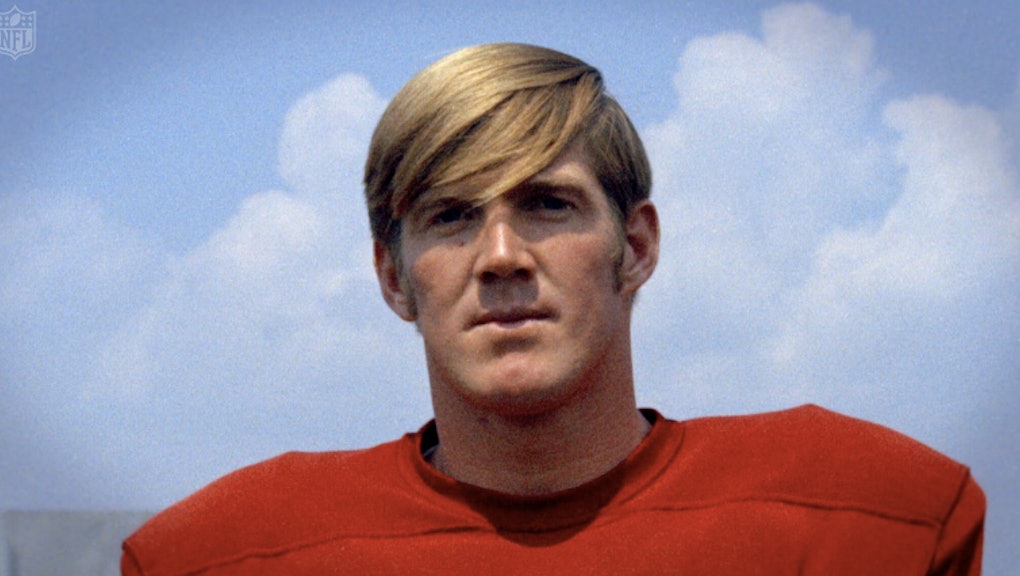 Former Vikings punter Chris Kluwe made waves earlier this month when he wrote a piece for Deadspin alleging that he was fired for speaking out in support of same-sex marriage. Though Kluwe is straight and married, he still faced bigotry from both Vikings' staff and fans. Given that there is still no openly gay player in the NFL — the plans for a player to come out fell apart last November — football still has a long way to go to promote acceptance and inclusivity both within and outside the league.

But a significant step was made on Tuesday when the NFL Network aired the documentary Jerry Smith: A Football Life, focusing on the former Redskins tight end. Not only was Smith a popular star player — he caught 421 passes for 5,496 yards and 60 touchdowns in 13 seasons — but he was also a closeted gay man and died from AIDS in 1986.

And perhaps most surprisingly of all, the NFL chose to highlight interviews with David Kopay, Smith's Redskins teammate — and one-time lover.

In the documentary, Kopay speaks candidly about their friendship, which eventually led to a sexual encounter.

"One night when we did get together, we were out drinking and one thing led to another. All of a sudden there was Jerry, in bed with me, loving me, and maybe I was still buzzed or whatever, but I thought, 'This is really good. At least I'm sharing something of myself with someone who was close and understood all that I'd been through..." he says. "And that's where we left it. And that never happened again."

The fact that two football teammates in the '60s were able to have a relationship, and that we are celebrating that bond 50 years later, is pretty incredible.

Kopay adds that there was a de facto "don't ask, don't tell" policy in place.

Almost all the Redskins teammates in the documentary say that while they didn't know for sure that Smith was gay, they either had a fair idea that he was or simply didn't care. The Redskins had a famously tolerant atmosphere under coach Vince Lombardi. "We had a reputation across the league that the Redskins had more gay guys than anybody. We had like 12 at one time, I think. You know, we just played football, we didn't care," recalls Charley Taylor, a Redskins Hall of Famer.

Things took a turn in 1975 when Washington Star reporter Lynn Rosellini decided to write a series on gay professional athletes. Smith agreed to be interviewed anonymously, but Kopay recognized him from his description. Kopay contacted Rosellini, and two days later, became the first retired professional athlete to come out.

"Jerry would always say that he was really glad of what I had done, but that he couldn't be me at all. He said, 'Just let me know when the next bomb hits,'" Kopay says in the documentary.

Two years later, Kopay published his autobiography, The David Kopay Story. In the book, he discussed Smith under a pseudonym, Bill Stiles, and recounted their relationship. He writes, "Now I thought I had found a real relationship, I was ready to be lovers for life. I worshipped the man."

But he didn't give Smith an easy pass either. Kopay went on to describe how Smith rejected him afterwards because he was unable to commit to a long-term relationship. "Here was another athlete who felt as I did. I was not alone. I was not crazy. But he hadn't really brought me out of my double-life because I was to learn that he had never been able to deal with his own homosexuality. He still hasn't."

While Smith and Kopay's story did not have a happy ending, the fact that the NFL chose to spotlight it is a huge step towards progress. The fact that two football teammates in the '60s were able to have a relationship, and that we are celebrating that bond 50 years later, is pretty incredible. Hopefully this will be an extra boost of confidence to other pro athletes who are struggling to come out.

You can watch the trailer for the documentary here.