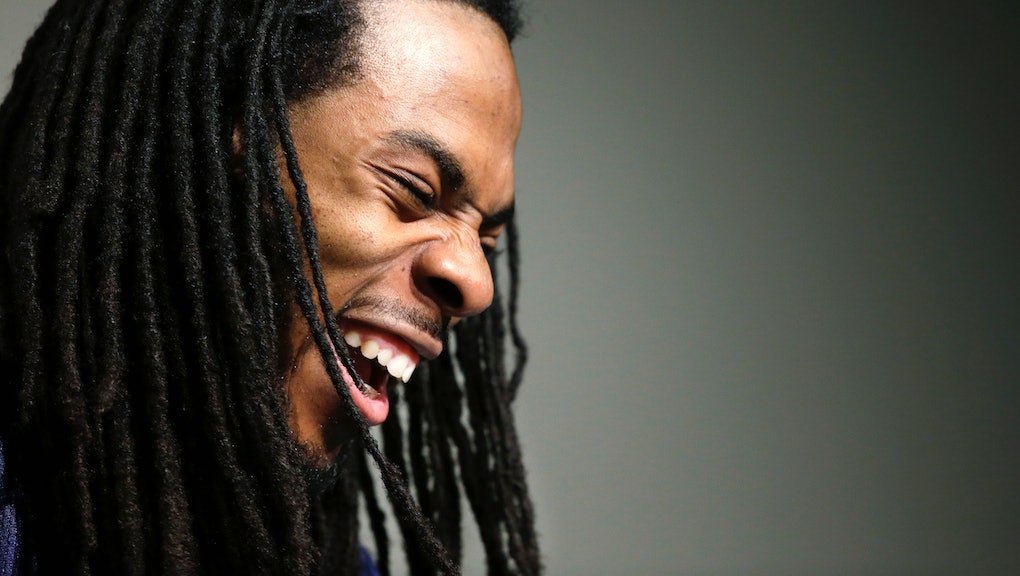 Richard Sherman Gives a New Interview. What He Says About "Thugs" Has America Thinking.

The news: Here's why Seattle Seahawks cornerback Richard Sherman thinks you're being a bigot when you call him a "thug."

"The only reason it bothers me is that it seems like it’s the accepted way of calling people the n-word nowadays. … Because they know. What’s the definition of a thug, really? Can a guy on the football field, just talking to people — maybe I’m talking loudly, or doing something I’m not supposed to be. But there was a hockey game where they didn’t even play hockey, they just threw the puck aside and started fighting. I saw that and I thought, 'Oh man, I’m a thug?' So I’m really disappointed in being called a thug.

... "I know some thugs and they know I’m the furthest thing from a thug. I’ve fought that my whole life, just coming from where I come from. Just because you hear Compton, you heard Watts, cities like that you think, ‘Thug. He’s a gangster. He’s this, that, and the other.’ And then you hear Stanford and that doesn’t make sense, it’s an oxymoron. To fight it for so long, and have to hear it come up again, it’s frustrating."

The background: Sherman has a point. According to Deadspin, the word "thug" was used over 625 times on television following his rant about San Francisco 49ers wide receiver Michael Crabtree. And Twitter blew up with people calling him one:

But Sherman isn't a "thug." He's a highly educated, well-spoken black man who happens to be super-enthusiastic about sports and a bit of a loudmouth. Poor sportsmanship or not, Sherman insists he's "not out there beating on people or committing crimes or getting arrested or doing anything. I'm playing a football game at a high level."

And as Black Agenda Report wisely pointed out, "Of course it shouldn’t matter how Sherman grew up or where or if he graduated from college. He did nothing wrong except make many white people mad and that is all that should have been pointed out ... Richard Sherman isn’t a villain but he isn’t a hero either. He chose a very grueling line of work which may damage him physically and mentally. He should enjoy his moments of glory because he will inevitably end up with a career life span that is a fraction of what most people will have."

Of course, "thug" doesn't necessarily have racial overtones for many people. (Think "union thug," "Mafia thug," etc.) And CNN's Don Lemon went so far as to point out that virtually every ethnic group over the last 100 years has used the term to some degree.

But when people of color think they're under attack for the color of their skin, often the supposed attackers double down with claims of "not racist!" instead of asking themselves why black people might find the term racially perjorative in the first place. Ever since the term "thug" became associated with hip-hop culture, white people have been using the term to a much greater extent against black people. Just look at the video produced by an Omaha police group which labels a two-year-old black boy a "thug." As Marc Lamont Hill noted, "The example's always black!"

In other words, when a term associated with violent, anti-social behavior is suddenly used to belittle a black guy gloating after a moment of glory, it might be a problem.

Sherman's message to people who call him a thug, or flat-out racist epithets: "What I did was within the lines of a football field. What they [those who posted racist comments] did was in actual reality. They showed their true character. Those were real comments. ... They had time to think about it. They were sitting at a computer and they expressed themselves in a true way."

"I thought society had moved past that."