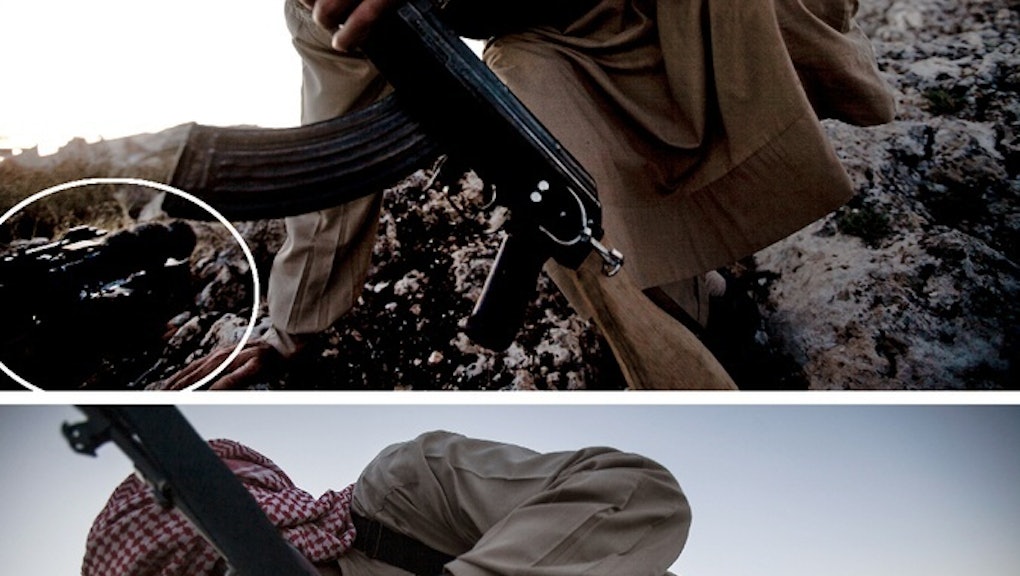 Should A Pulitzer Prize-Winner Have Been Fired For Altering This Photo?

The news: Pulitzer Prize-winning Associated Press photographer Narcisco Contreras has been permanently blacklisted from that agency.

He "will not work for the AP again in any capacity," according to Vice President and Director of Photography Santiago Lyon. His work, including the Pulitzer Prize-winning photos, has been purged permanently from their database and image search. And he will doubtless suffer difficulties finding work with the same kind of exposure and reach as the Associated Press in the future.

What did Contreras do to deserve this backlash? He doctored a photo of the Syrian civil war to remove another photographer's camera from the original shot.

But despite being a "cosmetic change that didn't alter the news value of the photo," writes The Wire, it's what made Contreras' career hit an abrupt end. He'd contributed nearly 500 photos by October 2012, won a dang Pulitzer, and was one of the organization's best photographers in Syria.

"I took the wrong decision when I removed the camera ... I feel ashamed about that," Contreras told his former employers. "You can go through my archives and you can find that this is a single case that happened probably at one very stressed moment, at one very difficult situation, but yeah, it happened to me, so I have to assume the consequences."

Isn't that a little harsh? It's more tragic than unfair. Contreras should have known better, seeing as the Associated Press has previously reacted to journalistic errors and photographic malfeasance by its staff with employment termination.

During the gubernatorial race in Virginia, the AP fired a reporter, his editor, and the regional supervisor for running a poorly-researched story alleging candidate Terry McAuliffe was being investigated by the federal government in relation to fraud. The reporter, Bob Lewis, had been fed the line by Republican candidate Ken Cuccinelli's campaign.

Other photographers have been fired for similarly minor infractions. See Miguel Tovar, another freelancer, who edited a photo to remove his shadow. (Reuters fired another photographer, Adnan Hajj, for badly photoshopping extra smoke into an Israeli airstrike.)

The AP sets the rules, and the rules are no doctoring photos. Ever.