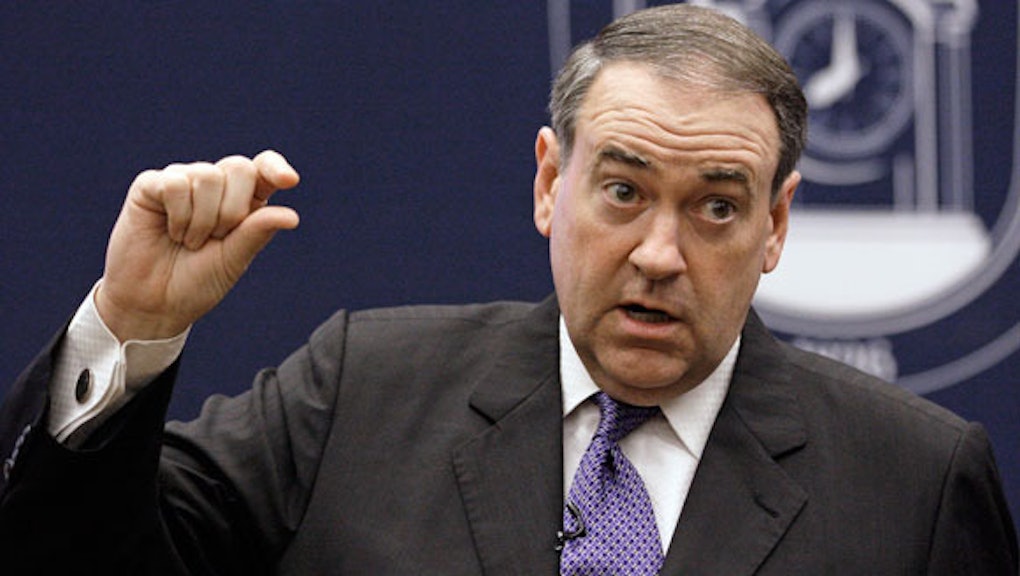 Mike Huckabee set the Internet on fire on Wednesday, after demonizing Democrats for not thinking that women can "control their libido" during a luncheon at the Republican National Convention.

At long last, a Republican man who's willing to tell it like it really is! Huckabee is exactly right. There are tons of ways for women to curb their libidos. And we're lucky to have the Republican party to show us how to do this every day.

As an ode to the GOP, here's a list of the best ways to make women totally uninterested in recreational sex without relying on the use of chastity belts (also check out Ann Friedman's pie-chart at the Hairpin).

1. Be really transvaginal about everything.

Wanna make sure a woman keeps her pants on? Bring up the subject of trans-vaginal ultrasounds. There's nothing like thinking about a probe being inserted inside her lady parts without her consent to get her to never open up her legs again. I hear it works better than a bottle of aspirin between the knees!

If you meet a girl in a bar, just start spewing ambiguous and unfounded theories about rape. It works like a charm!

Follow the lead of Arizona State Rep. Trent Franks (R), who said, that "The incidence of pregnancy resulting from rape are very low." And, Todd Akin who professed that women who are victims of "legitimate rape" (not to be confused with the fake kind) can't really get pregnant because they have the ability to "shut that whole thing down."

And if you want to make sure that her libido is the one being shut down, kindly remind her that Jesus always intends rape and that impregnation in the case of sexual assault is a gift from God. That is a sure-fire way to keep her disturbed enough to run the other way!

3. Chit chat about ultrasounds as much as you can.

Whenever your home girl starts talking dirty, deflect it by talking about mandatory ultra-sounds. Follow the lead of so many Republican men like Texas Governor Rick Perry of Texas and Wisconsin Governor Scott Walker of Wisconsin. They talk about the virtues of forcing women to undergo unnecessary medical procedures like this one all the time. The ladies hate it!

Forget that the medical community staunchly disputes this. It's definitely still worth mentioning to any lady that's down to clown. She'll be out of there in no time.

5. Remind her about the time Mike Huckabee coined the term "Uncle Sugar."

If you want to make sure a woman doesn't want to sleep with you, be sure to always bring up "Uncle Sugar" and abortion, even when she wants you to talk about something else, like I don't know, jobs.

During his address, Huckabee said democrats think women "are helpless without Uncle Sugar coming in and providing for them a prescription each month for birth control because they cannot control their libido or their reproductive system without the help of government."

Never mind, women's reproductive health needs. This one will work -like- a- charm.

6. Remind her about Mike Hukabee, generally.

And if none of those tricks work, just carry around some pictures of Mike Huckabee in your wallet. You'll be surprised how far they can go. Ladies will be running away from you in no time!

How has the Republican party reduced your libido this year? Let me know on Twitter and Facebook.