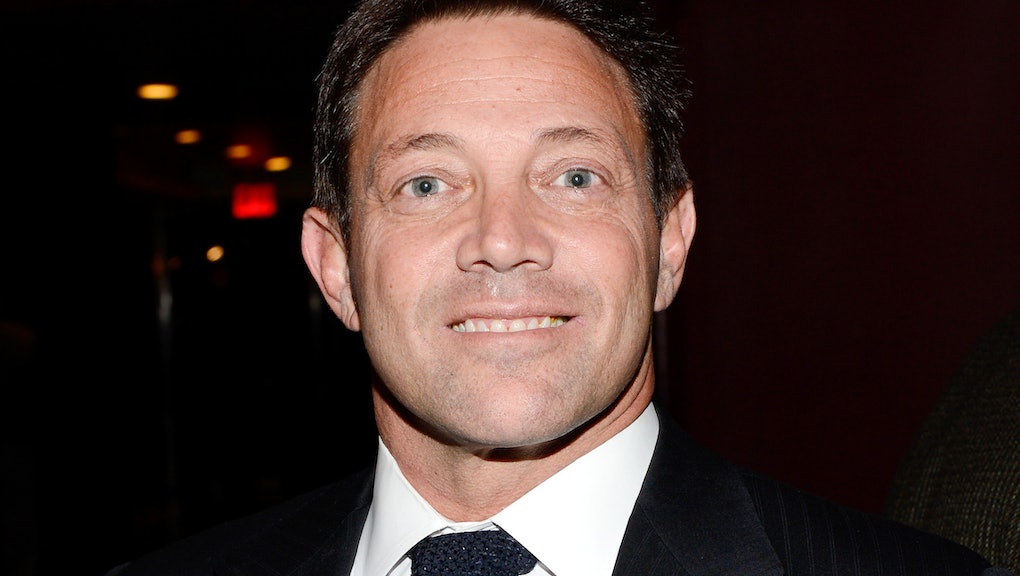 If You Think 'The Wolf of Wall Street' Jordan Belfort Has Learned His Lesson, You’re Wrong

In the 1990s, financial crook Jordan Belfort was riding high on drugs, money and hookers — as depicted in the motion picture The Wolf of Wall Street.

After years of swindling money, Belfort was busted by the U.S. Department of Justice and eventually agreed to testify against smaller money launderers to receive a reduced sentence of which he only served 22 months. As part of his sentence, he was ordered to pay 50% of any future earnings toward restitution to the 1,500-plus people who lost their savings due to his dishonest business practices.

While Belfort's life has certainly changed since the turbulent '90s, some say he hasn't changed at all. Bo Dietl, whose company Beau Dietl & Associates provided security for Belfort during his days at brokerage firm Stratton Oakmont, says the former financier feels little remorse and is still a "scumbag."

When asked if Dietl thought Belfort had changed, he answered "bullshit," pointing to the fact that the financier has suffered little and continues to build his wealth with the publication of two books and sale of his movie rights. Belfort is also currently shopping around for a reality television show deal. Although he had an income of more than $1.7 million from his works, Belfort has only paid $243,000 in restitution since 2007. He still owes $110.4 million to his victims.

"Does this sound like someone who's suffering from their actions?" asked Dietl, who also appeared in The Wolf of Wall Street.

"Just think about your life, having the greatest actors playing you ... having Martin Scorsese directing it ... having a $100 million budget ... how would you feel? Everyone wants to interview him ... he's everywhere. He's like Robin Hood now and he stole $200 million from grandma and grandpa .... he's a scumbag," Dietl said an interview at his office.

While working for Belfort, Dietl said he never saw him sober. "The guy was on fucking Quaaludes ... he was stoned every time I saw him," said Dietl. "That's how he went to work everyday. He would do cocaine to pick himself up and the Quaaludes would put him into a real stupor."

Dietl saw what the drugs did to Belfort first-hand, who was extremely paranoid from the drugs and asked Dietl's company to put technology cameras, motion detectors and flood lights around his home.

Dietl said much of what happened in the movie actually occurred — even the part about Belfort being so high that he would fall asleep in his macaroni.

Of course, Dietl's words against Belfort's character reveal his own opinion. Maybe no one will ever really know if, or how, Belfort has changed. But Belfort's story can't stop us from asking if he has paid enough for stealing millions of dollars, ruining thousands of people's lives and causing their families grief and depression.

We also have to ask ourselves why movies about white-collar criminals remain so popular in the U.S. The popularity of films like The Wolf of Wall Street, American Hustle, Wall Street and American Psycho confirms that Americans love watching rich people commit heinous crimes.

Do we glorify these films? Do we welcome white collar criminals because they're typically charming, educated, wear designer suits and usually don't look like what most of us imagine a criminal to look like? Maybe we're comforted in that we can't see the victims and without the victims, it's hard to imagine a crime. As a result, these white collar criminals rarely understand the impact that their actions have on their victims. No one ever forces them to face it.

After former trader Sam Polk recent wrote in the New York Times about his addiction to money, Falguni A. Sheth made a solid point in Salon: "The issue that really troubles me" is that "Polk's confession is absent of any role he played in a financial sector that led to one of the most destructive economic decimations since 1929, and to a widespread societal poverty or misery." Sheth sarcastically wrote, "Apparently, [Polk's] only sin was gluttony."

In the end, Wall Street has a long way to go before it can change its money-centric, toxic culture. But in the meantime, it may help if we remember that criminals are criminals — whether they come from the slums or Wall Street.

Watch what Joel Cohen, who was the real-life prosecutor in Belfort's case, says on The WSJ: