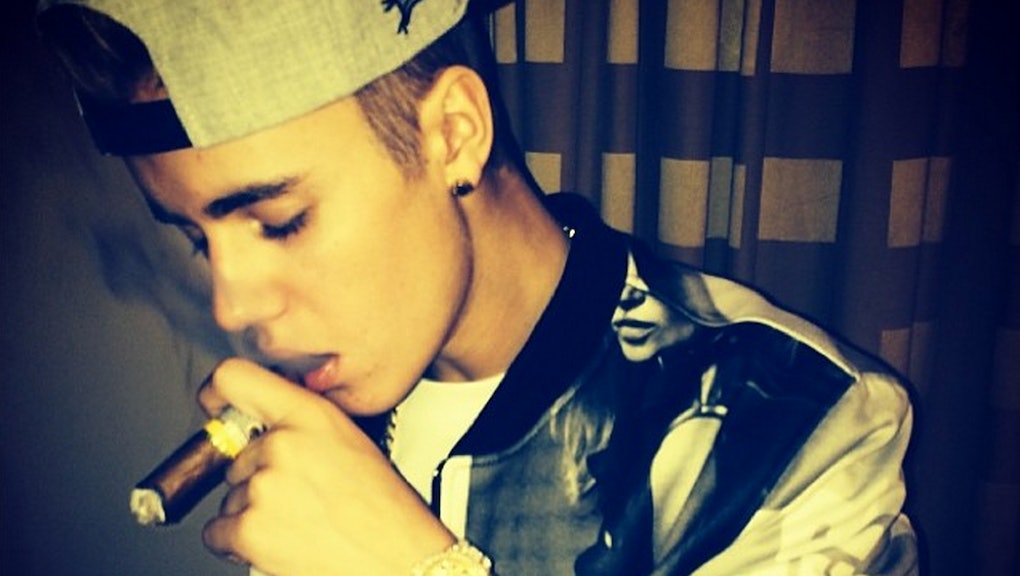 Unless you just this second emerged from a secluded cabin in North Dakota, you know that on Wednesday night, Justin Bieber was arrested for drag racing, suspicion of driving under the influence and resisting arrest. This is the latest, and perhaps most serious, of his scandals in what's becoming a well-publicized downfall.

While varied in nature, all of Bieber's scandals over the past year have one thing in common: They are dramatic performances of masculinity from a boy who was literally raised on pop culture. It feels like he's looking at a list of what masculinity is supposed to be — strip clubs, drag racing, models, bottles — and acting accordingly. Unfortunately, he's not acting like a lunatic — he's just reflecting our cultural portrayal of masculinity.

I don't live in a cabin in North Dakota, but before news of Wednesday's drag racing, I wasn't aware of all of Bieber's 2013 scandals. So let's do a quick review for other fellow non-Beliebers (and cabin-dwellers).

— March 2013: Allegedly spit in his neighbor's face during an argument.

— April 2013: Authorities in Stockholm found drugs on his tour bus.

— October 2013: Allegedly punched DJ Michael Woods's tour manager after the DJ disregarded his request to play hip-hop. He also apparently hid behind his bodyguards after punching the manager.

— November 2013: Allegedly left a brothel and returned to his hotel with some of the, err, staff.

— January 2014: Arrested for drag racing and suspicion of DUI.

It's sort of like he's playing Grand Theft Auto, just without the killing.

He's 19, trying to become a man, and making a clichéd disaster of it.

Seriously though, each of these scandals is a clichéd embodiment of a misguided masculinity concept that is prevalent in America. Violence, drugs, women, fast cars, even spitting on people — it feels like he's just pulling these out of an old chauvinism manual. Of course, these are not new pursuits for rock stars or other big-time celebrities, but the contrast between Bieber's pre-adult image and his current one makes his actions that much more notable.

His physical image has evolved to reflect his change in values as well — cut body, tattoos, a propensity to neglect his shirt. It feels like he's not just getting caught doing things he is ashamed of; he is flaunting a new image of himself as a man, a manly man. Worst of all, he seems almost proud.

Yet we talk about this as if he's just an abberration, as if we didn't celebrate him so wildly for being part of the very culture that holds these values dearest. It's a culture that thinks violence (particularly in response to a perceived slight), objectifying women, vanity, greed and alcohol abuse are the staples of manhood. Ironically, when Bieber takes these depictions to their extremes, we lampoon him and scream foul.

Of course he is still at fault. And we should hold him to a higher standard than most, because he is a public figure who creates culture. But we can at least understand where these new tendencies are coming from, and work against them rather than simply mocking him.

He's 19, trying to become a man, and making a clichéd disaster of it. He's exploring outlets for his masculinity, very publicly and with a lot of money behind him. But that doesn't mean he's fully to blame — this is what he's been told it means to be a man.