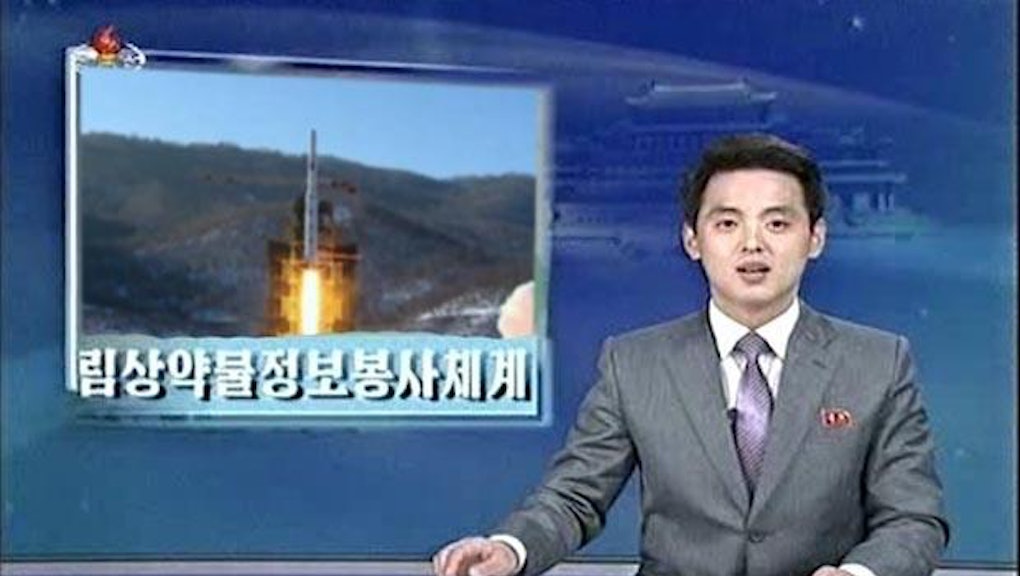 Did North Korea Really Claim to Land a Man On the Sun? Here's the Full Story.

The news: OK, if you're a fan of the alternately horrifying and fascinating news emanating out of North Korea's squalid dictatorship, you might have heard the latest propaganda seemingly emanating from the Hermit Kingdom: They've finally achieved their national dream of landing a man on the sun.

According to Reddit and Tweaktown, the Korea Central News Agency said the following during a live news broadcast, naming 17-year-old Hung Il Gong as the astronaut:

"We are very delighted to announce a successful mission to put a man on the sun. North Korea has beaten every other country in the world to the sun. Hung Il Gong is a hero and deserves a hero's welcome when he returns home later this evening."

Hung took just four hours to get to the sun and will only take 18 to return, making this a day trip. When he gets back to North Korea, he will be greeted by his uncle and supreme leader, Kim Jong-un.

Then Hung will be fed to a pack of starving, rabid dogs while Kim laughs and claps, before Dennis Rodman slam dunks his decapitated head through a hoop made of bones.

Oh, sorry, we made that last part up. The rest of the story was also an obvious lie from someone else ...

Where the joke originated: Did North Korea really claim to put a man on the sun or do people just like making Kim Jong-un look like a super-duper extra sillypants?

Despite outlandish North Korean propaganda like Kim Jong-il's vaunted all-time golf scoring record and the supposed discovery of a unicorn lair in Pyongyang, this one would already be sending up red flags even if it wasn't easy to track down the original source. This article originally appeared on the Waterford Whispers News, a satirical Irish site (think The Onion) that runs headlines like "Ground-Breaking WIT Study Finds Link Between Obesity and Over-Eating" and "World Leaders Renew International Lie-To-People Pact."

Believing this story was genuine propaganda would require an assumption that North Koreans are either blindingly stupid or all carbon copies of Winston Smith at the end of Nineteen Eighty-Four, both of which are clearly untrue. North Koreans aren't scientifically illiterate enough to believe you can land on the sun. As Reddit notes:

In fact, depending on who you ask, North Korea can't even build real missiles. A pair of German missile experts says that the ICBMs North Korea is so fond of parading around are low-quality mockups.

Other experts disagree, saying the mockups are evidence that the North Koreans are getting closer to building an ICBM capable of striking the continental United States.

Either way, they can't even launch satellites properly, so the sun seems a bit out of their league.