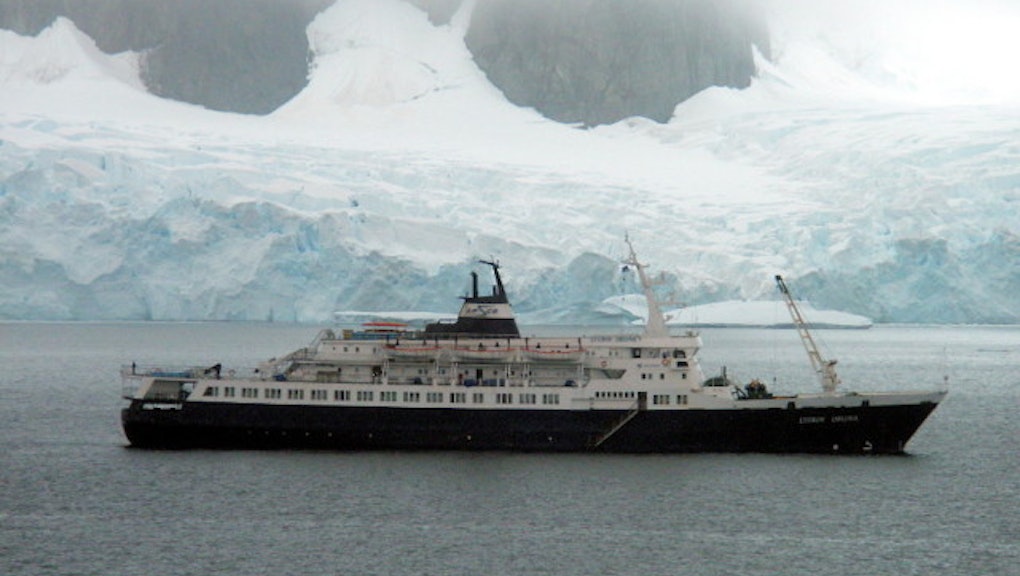 The news: Watch out, maritimers and coastal U.K. residents. A ghost ship filled with cannibal rats that drifted across the Atlantic Ocean is now floating off the coast of Scotland, ready to hurl itself upon the rocks of Caledonia and unleash its fetid cargo of hideous, starving rodents upon God-fearing folks everywhere.

News outlets from the BBC to Fox News to Gawker are covering the story, which concerns the abandoned Russian cruise liner Lyubov Orlova. From when it was built in 1976 in the former Yugoslavia to 2010, when the owner racked up $250,000 in debt, the ship catered to the Russian elite on cruises to the Earth's poles. Canadian authorities seized the ship that year, and its worth was estimated at $1.1 million. But when being towed from Newfoundland to a scrap yard in the Dominican Republic in January 2013, it was lost in rough seas. According to the National Post, another Canadian vessel dispatched corralled the ship and towed it into the deeper ocean to prevent it from colliding with an oil installation.

Infested with rats and left abandoned to drift in the ocean, the Lyubov Orlova lurked across the Atlantic. Left to their own devices the voracious rats have begun eating each other, and when it makes landfall the rats will flee onto land devouring everything in their path.

If that sounds a little ridiculous, that's because it's basically the plot of Ghost Ship, except not in the Bering Sea and with rats instead of ghosts. Also much like Ghost Ship, it's fiction.

How the fake story started: In March 2013, two lifeboats fell off the ship and set off automated transmitters, leading authorities to realize it was still drifting — two-thirds of the way across the ocean towards the coast of Britain and Ireland.

A week later, radar picked up an object about the Lyubov Orlova's size off the coast of Scotland, but nothing was ever found. Powerful storms over the past 10 months have created conditions that could have driven the Lyubov Orlova closer to the U.K. coastline, but no one really knows.

But the Irish Coast Guard isn't particularly worried it will make landfall:

"There is no further action required by Ireland and there are no reports and sightings."

"Normal costal surveillance activities are carried out which are aware of the issue of the vessel."

Nor is the U.K. Maritime and Coastguard Agency:

"We have received no reported sightings of the vessel since April last year, but we will respond accordingly."

If the vessel is even still floating, it may never make landfall, and if it does, no one has been aboard the ship in over a year — so the rats are just speculation. The only supporting evidence is Pim De Rhoodes, a Belgian salvage hunter, who told The Sun (a tabloid) "There will be a lot of rats and they eat each other. If I get aboard I'll have to lace everywhere with poison."

But in all likelihood, the rats on board — if any — would have starved long ago, meaning the fabled cannibal rats are actually more likely decayed clumps of fur and bone.

So where is it? No one knooooooows. That is kind of creepy. Here's an updated map of sightings, courtesy of the New Scientist: