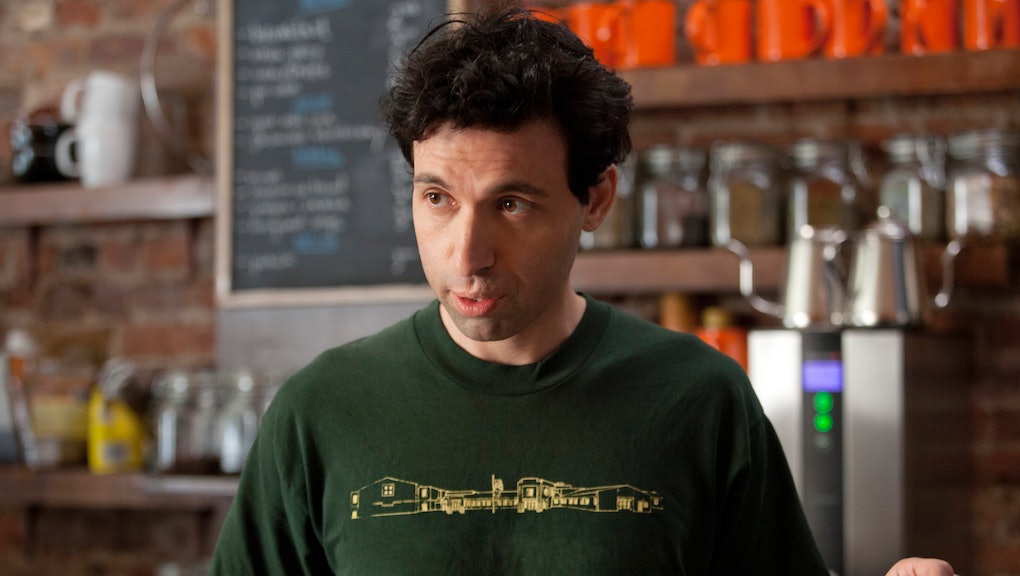 The Definitive Guide to Why Every 'Girls' Fan Should Love Ray

Of all the characters on Girls, the appeal of Ray might be the most heavily contested. It's not because he can be alternatively sweet or horrifying, like Adam, or because he represents a very particular type of 20-somethings, like Shoshanna. Instead, it's because he's a fairly neutral, non-outlandish character — in other words, he's the most like a real human being.

While some have labeled him "pathetic," there's a lot to be argued in favor of Ray, the oldest and best of the Girls characters. While the other characters are often immature and selfish, Ray can be endearing and mature. Here are four reasons why he deserves some serious respect.

As PolicyMic's Hazel Cills points out, the women of Girls are dependent on recognition and support from a significant other. For example, throughout the first two seasons, Marnie self-destructs and loses sight of herself as a result of her rocky relationship with Charlie. The same kind of dependency can be said of Charlie and Adam.

Ray could have easily fallen into lazy sadness after falling in love with Shoshanna only to have her leave him. Instead, he picked himself up and began actively trying to improve his life. He's making moves, too — getting his own apartment and taking on responsibilities at work. Perhaps he's doing it because of his experience with Shoshanna, which showed the places where he was lacking, but he's not doing it to win her back. Unlike many of the characters in the show, Ray is improving himself for himself.

It's no big secret that the Girls characters are not exactly the most responsible of 20-somethings, leading some to say that the show is not an accurate depiction of the ambitious spirit of New York. The closest thing anyone has to a regular job at the moment is working at a coffee shop — not incidentally run by Ray. In his quest for self-improvement, Ray is taking over the shop from his ill boss. Ray questions his leadership ability, but nonetheless accepts the position because he knows it's the right thing to do and a good opportunity. If that's not admirable, I don't know what is.

One of the recurring faults of the Girls crew is their inability to know their own personal safety limits. Hannah stuck with Adam in season one despite his carelessness towards her, Charlie kissed Marnie while he had another girlfriend, Shoshanna and that crack pipe... the list could go on. Ray, on the other hand, is self-aware enough to know what he can and cannot handle.

In last week's episode, rather than fake friendly conversation, he told Shoshanna that he didn't want to see her. This was one of the healthiest wellness decisions we've seen on the show. Instead of painfully sticking through "being friends," Ray was honest and open about his feelings. Moreover, he was as kind as possible in saying so. Even when turning down Adam's sister on the dance floor, Ray was, as Vulture points out, "desperately trying not to be extremely rude to someone who's acting totally irrationally towards him."

Finally, you gotta love Ray because he is just so damn sweet. Alex Karpovsky has perfected the role of an emotional young man trying to seem like he doesn't care. But when his façade cracks, it hits home like no other.

His confession of love to Shoshanna in the second season stands out as one of the sweetest scenes of the series. In last night's episode, his reaction to David's death was quietly moving, especially since his only interaction with the man was a fight over LMFAO. And his conversation with Shoshanna last week was heart-breaking as Karpovsky was able to pack intense emotion into a few soft-spoken words — no shouting, no cursing, just honesty and directness (not to mention his subtle "cool cigarette" dig at the end of his speech was perfectly biting). It's hard not to love someone so earnest and caring.