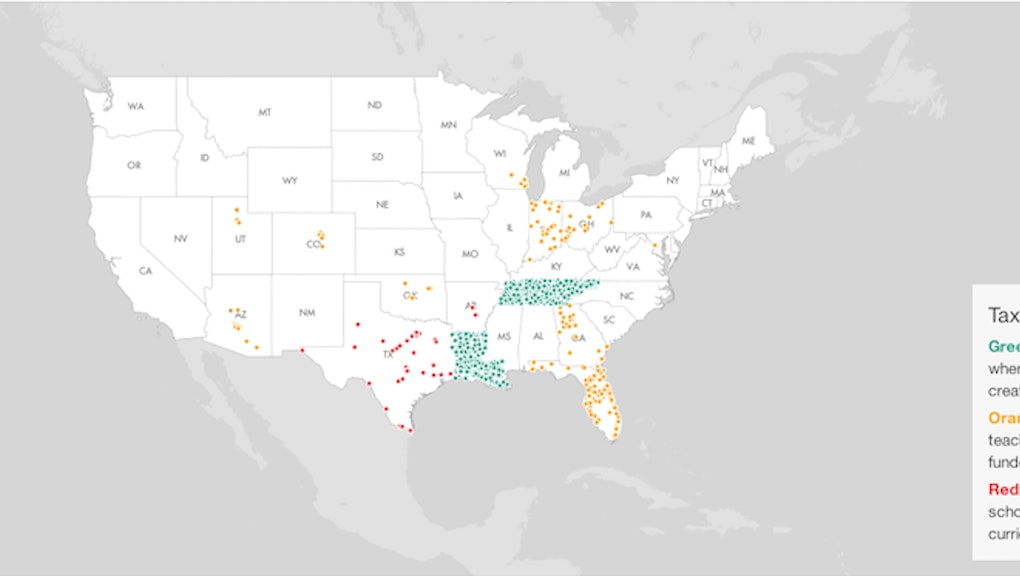 14 States Use Tax Dollars to Teach Creationism in Public Schools

Do you live in Texas, Louisiana or Kentucky? Maybe even Washington, D.C.? Then, as Slate reports, your taxes are likely going to schools — public, private or charter — that are teaching creationism to students. Below is a complete list along with "facts" that are often taught by creationists.

At least 15 schools in this state teach biological origin, "Man was created in God's image," while getting state tax credit scholarships for disabled children or children attending under-performing schools.

Two public school campuses are run by Responsive Education, which is known to use curriculum to undermine the underpinnings of evolution. From Slate: "These materials wrongly portray the fossil record and the age of Earth as scientifically controversial, assert that there is a lack of 'transitional fossils,' and claim evolution is 'untestable.'"

A handful of schools in Colorado's Douglas county teach creationism while also taking part in the county scholarship program (which relies on public funds).

The kind of thing a kid might hear in school is that God takes credit for a breakthrough like Dolly the sheep, and that God frowns upon genetic cloning because of the undue power it gives humans to create and end life.

A whopping 164 Florida schools take public tax credit scholarship money for low-income and disabled students, while teaching creationism in schools. These fortunate students might learn that this month's polar vortex proves that global warming is a myth.

You might learn at one of these schools that evolution isn't real, rather gene mutations cause "degeneration," leaving an organism gradually worse off.

Thirty-seven of Indiana's schools participate in a statewide voucher program for disabled students.

Another common creationist teaching: natural temperature fluctuations cause carbon dioxide build-up, rather than man made emissions causing such uncalled for extremes.

One of the few states where there's an actual law on the books allowing for creationist teaching, Louisiana might take the cake.

According to Ars Technica, creationist think tanks like the Discovery Institute (which wrote the Louisiana law permitting the teaching of creationism in public schools) write textbooks that try to undermine decades of science and research about evolution and sound scientific theories such as natural selection.

They may tell students that it's impossible for scientists to recreate "genetic events" that explain the evolution of the "ossification of endoskeleton in bony vertebrates." To put it another way, the endoskeleton must have been created by God in one fell swoop.

Even children in the federal capital aren't safe. Three schools in the District of Columbia participate in a tax credit program for low income children, while examining evidence for the global flood.

Like in Louisiana, state law allows Tennessee public schools to teach creationism as an alternative to evolution, cloning or global warming.